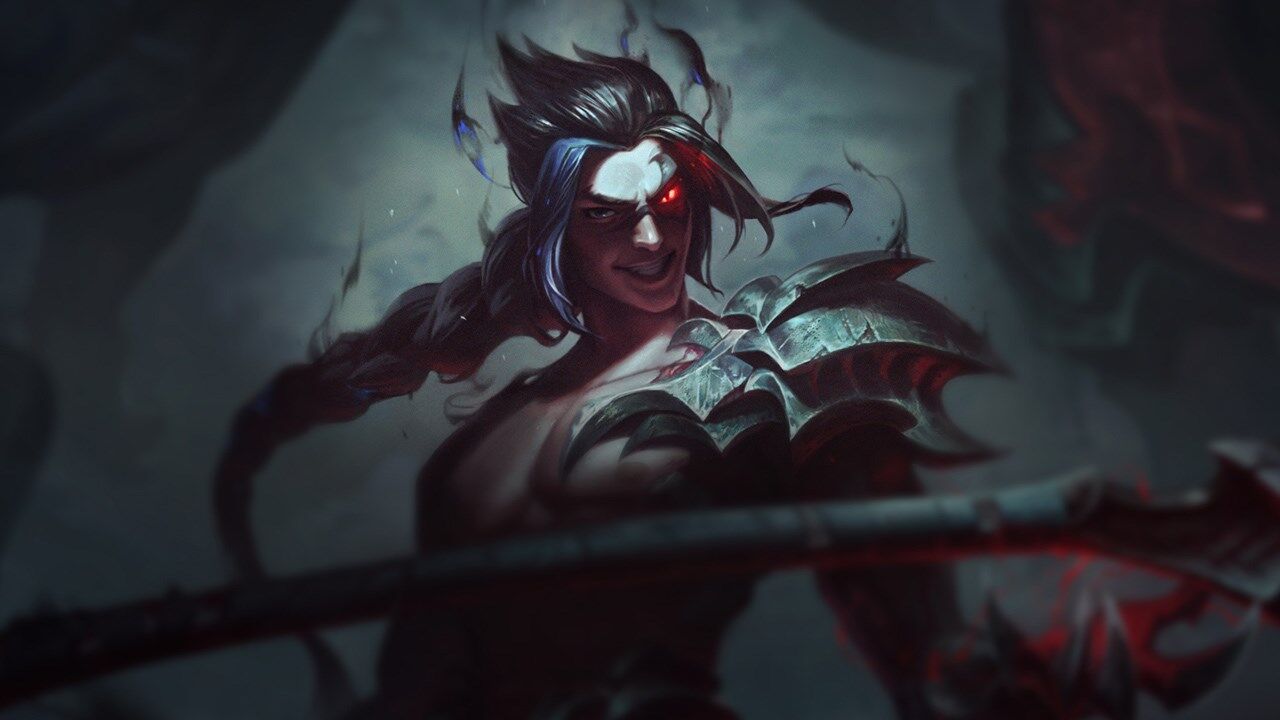 Kayn Champion Spotlight
Kayn is a champion in League of Legends.[1]

Shadow Assassin is a champion in League of Legends.[2]

Rhaast is a champion in League of Legends.[3]

Kayn wields an ancient, sentient weapon, that battles with him for control. Enemy champions drop orbs for each instance of damage (excluding damage over time) they receive from Kayn and everytime he scores a

takedown against them, red orbs by

melee champions and blue orbs by

ranged champions. Orbs will remain on the ground until automatically collected by Kayn regardless of range once he leaves combat, filling a bar above his portrait.

Once the bar is filled, Kayn can return to the summoning platform to interact with his portrait to either be overwhelmed by

Rhaast or expel him to become the

Shadow Assassin, or wait 4 minutes until the other form becomes available, reduced by 5 seconds for each collected orb of their type after that. After choosing a form, Kayn transforms into

Shadow Assassin over 6 seconds, during which he is

untargetable, and unable to act. Kayn cannot select a form if he is unable to cast abilities.

The transformation type is decided based on the highest amount of damage dealt to the respective range type. If the two forms are within 8% of each other, the last champion range type hit will determine the transformation. If both types are hit at the same time the trasformation will default to

Rhaast. The transformation will permanently empower some of Kayn's abilities and grant him Homeguard for the first time.

Shadow Assassin: If Kayn has been out of combat with enemy champions for over 8 seconds, or he casts

Umbral Trespass, he deals 12% − 44% (based on level) of post-mitigation damage dealt against enemy champions as

bonus magic damage, lasting for 3 seconds upon entering combat and also applying on the first instance of damage dealt. If this effect is ready, it will not go on cooldown by receiving damage.

physical damage that he deals to enemy champions with his abilities.

"I am the shadow of death."

"Oh, the wrath I will unleash!"
Info

dashes in the target direction, dealing physical damage to enemies he passes through, before swinging his scythe, dealing the same damage to surrounding enemies.

Both instances of Reaping Slash deal 40 bonus damage against

Darkin: Reaping Slash's damage is modified to deal 65% AD (+ 5% (+ 4% per 100 bonus AD) of the target's maximum health) physical damage for both instances. This damage is capped against monsters but does not include the bonus damage.

The dash's speed scales with Kayn's

Active: Kayn performs an upwards sweep with his scythe in the target direction, dealing physical damage to all enemies within a line and

untargetable living shadow at the casting position to perform Blade's Reach's sweep over 0.55 seconds in his stead, reducing the ability's cast time to 0.

knocks up enemies hit for 1 second.

ghosting and the ability to ignore terrain collision for a duration. If Kayn has been in combat with enemy champions within the last 3 seconds, Shadow Step will instead last 1.5 seconds.

unobstructed vision while inside.

Receiving damage from or dealing damage to an enemy

champion while Shadow Step is active reduces its remaining duration to 1.5 seconds. This effect also cannot remain active out of terrain for longer than 1.5 seconds and will cancel immediately if Kayn performs a basic attack or becomes

cooldown is reduced to 8 seconds at all ranks. Additionally, Kayn gains 100%

slow resist and, upon entering terrain, the bonus movement speed is increased to 80% for the remaining duration.

dashes to a marked enemy

champion. Upon arrival, he

channels for up to 2.5 seconds,

attaching to the target and

revealing them. Umbral Trespass can be recast after 0.75 seconds during the channel, and does so automatically if the channel ends without reactivation or is

Recast: After a 0.75-second delay, Kayn deals physical damage to the target and

Retrieved from "https://leagueoflegends.fandom.com/wiki/Kayn/LoL?oldid=3275559"
Community content is available under CC-BY-SA unless otherwise noted.