Kadregrin the Infernal (Legends of Runeterra) 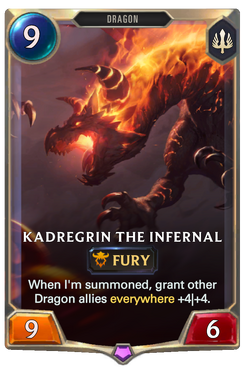 When Demacia underwent a sudden spate of Dragon attacks, Shyvana knew that Kadregrin the Infernal was to blame. Other Dragons, inspired by his bold nature and powerful flame, drove the Demacians to fear.

Kadregrin the Infernal, drake of the Red Mountain, threatens to become a scourge upon Demacia and one of Shyvana's most hated foes. Although driven by malice and greed, Kadregrin is nevertheless a cunning and powerful enemy.

Wielding flame that rivals Shyvana’s own, Kadredgrin and the Half-Dragon are forced into a never-ending battle where neither will give ground. Time and again they are forced to retreat, bloody and battered, destined to fight again another day.