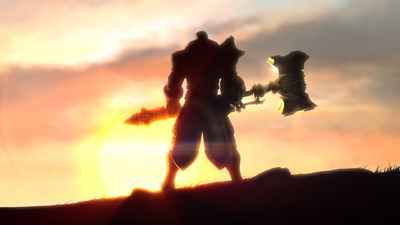 If you've been waiting for the League to acquire a true Renaissance man, then your long wait is over. Meet

Jayce, the Defender of Tomorrow. In addition to being a class act and charmer, this modern gentleman is one of Piltover's premier scientific geniuses.

This brazen, well-equipped man for all seasons sports hi-tech armor and wields the skull-crushing

Mercury Hammer that also transforms into the

Mercury Cannon. Whether you want to get up close and personal to punish enemies with a gigantic blunt instrument or shake things up by peppering opponents with energy blasts from a distance, Jayce has the skills it takes to deliver.

Jayce, the Defender of Tomorrow Revealed

If you're ready to add a little versatility to your fighter or ranged carry game, look no further than

Jayce, the Defender of Tomorrow. Jayce's transforming weapon allows him to adapt to nearly any situation, making him an extremely versatile champion for whatever role you need filled on the Fields of Justice.

The lynchpin in Jayce's kit is his ultimate. Starting with a free rank at Level 1, Jayce can activate his ultimate to transform his weapon into either the short range

Mercury Hammer or the long range

Mercury Cannon. Each time he transitions he'll receive a bonus effect on his next basic attack that either shreds the target's defensive stats (

Selecting the right weapon type for your current engagement is the key to playing Jayce effectively. While

Hyper Charge to wear down opponents while utilizing

Acceleration Gate to keep his team at a safe distance. Having worn an enemy down in this manner,

Acceleration Gate can be repurposed to give chase, allowing him to shift his weapon into its

hammer form and leap into the fray with

Once he's closed the distance, he can utilize

Thundering Blow to pick up a quick kill, while the additional Armor from being in

melee mode gives him the toughness necessary to either withdraw or continue fighting at close range. However you choose to play Jayce, canny shifting between his weapon modes will make or break your success on the battlefield.

Jayce leaps to an enemy, dealing physical damage and

knocks them back a short distance.

Mercury Hammer into the Mercury Cannon, gaining new abilities and increased range. The first attack in this form reduces the target's Armor and Magic Resistance.

Jayce fires an orb of electricity that detonates upon hitting an enemy (or reaching the end of its path) dealing physical damage to all enemies in the area of the explosion.

Jayce deploys an Acceleration Gate, increasing the movement speed of all allies who pass through it. If

Shock Blast is fired through the gate, the missile speed, range, and damage will increase.

Retrieved from "https://leagueoflegends.fandom.com/wiki/Jayce/Development?oldid=3063801"
Community content is available under CC-BY-SA unless otherwise noted.