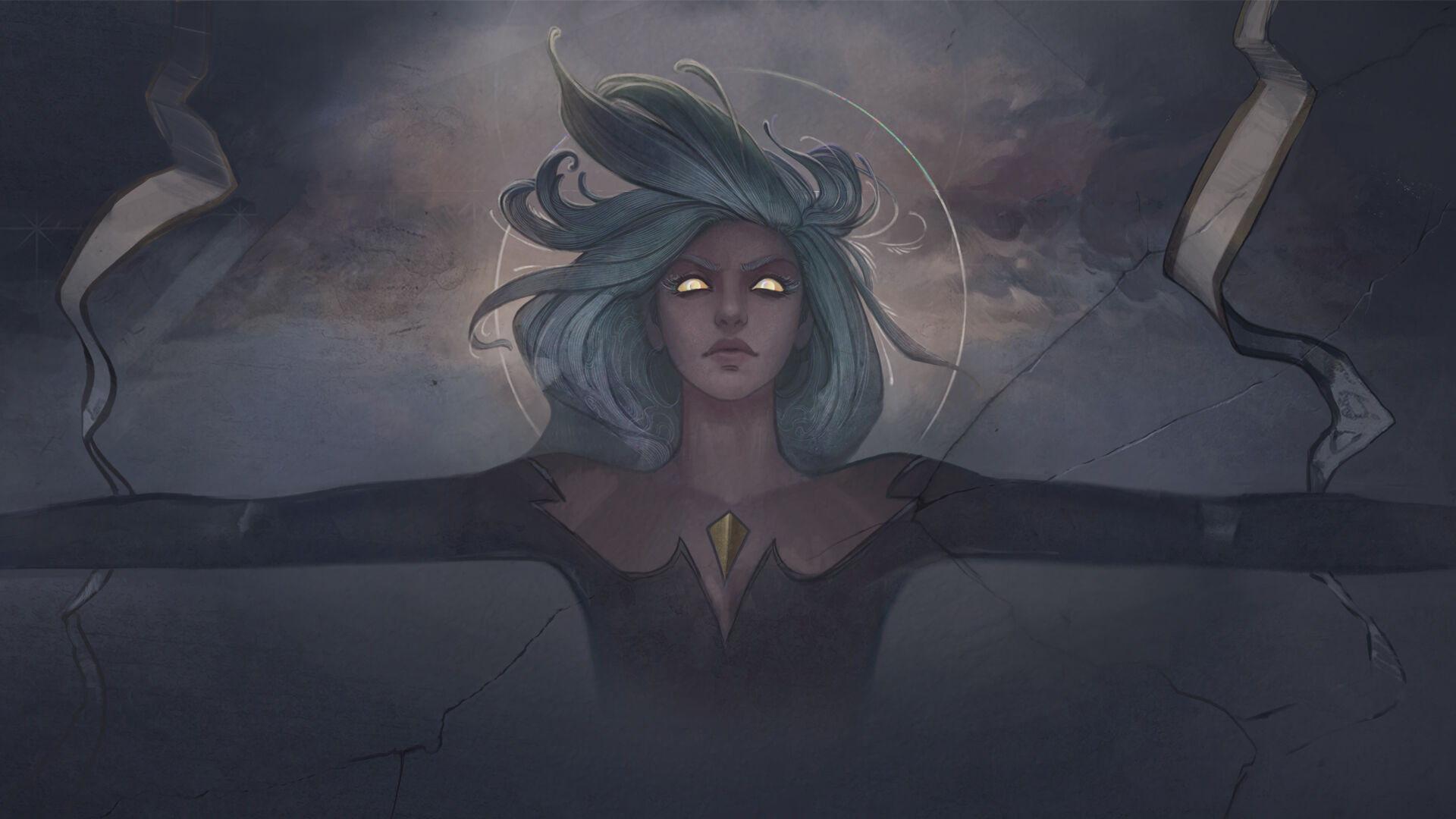 In the Fires of Justice

But most fearful of all was the burning in her eyes, gleaming and grave with uncompromising wrath.

Abris’ stomach tightened into knots as he waited on the steps of a shining temple. Standing watch before the temple doors was a statue of the

Protector. The setting sun silhouetted its face, casting a radiant aura around its bowed head. It was carved in white stone that sparkled with flecks of gold. Great

wings framed its shoulders as it held two

swords against its chest. The statue’s helmeted expression was blank, austere, more perfect than any human. Hundreds of candles covered the plinth at its feet.

Abris leaned his sword and shield against the base of the sculpture. They were as pristine and unmarred as the stone swords above him. He was told that the Protector blessed virtuous soldiers of Demacia, and felt a strange comfort at its presence.

An elderly woman cloaked in white exited the door of the temple.

“Please, do you have a moment?” Abris called out to her.

She made her way, slowly, over to him.

“The Illuminators always stop for those in need. Tell me, what do you seek here?” Her face crinkled as she spoke, but her eyes were kind.

“I… I leave for battle tomorrow,” said Abris. He opened and closed his fists, nervous. “My sword arm is strong, and I am proud to defend Demacia's honor. But I wonder—how can I claim to be any better than the barbarians invading our lands if I slaughter them just the same? What good are our white walls and resplendent banners, if below them we spill their blood as they would ours?”

“Ah,” the Illuminator said. “Yes. Killing is not to be taken lightly, even as a soldier. Let me tell you a story.” She gazed up at the statue. “Will you light a candle for her as I speak?”

Abris knelt and took a flame from one of the votive candles at the statue’s feet, using it to light another.

The Illuminator’s voice cracked with age as she began the story, and Abris was reminded of his late grandmother, who’d often told him myths and histories of their people. He never knew which stories were true and which she had conjured from her fanciful mind.

“Long ago, in a land now lost to time and crumbling decay, a cruel king led his people into poverty. During a time of great famine, the king gathered everyone from across the realm into his castle courtyard. There, he declared he would cast aside the old laws in order to end their time of scarcity, as was his right. He took their gilded lawbook and cast it to the floor, naming himself the law. Whatever rules or decrees he spoke would become law, no matter what.

“Under guise of protecting the people, he announced his first decree. Since there were too many mouths to feed, the king said, the elderly had no right to food. They were to be killed, and there was no other way.

“The starving citizens had no strength left to fight this injustice, and the king’s guard forced the elderly folk to line up for slaughter.

“The first in line was a man with silver hair who stumbled as he stepped forward. He pleaded with the king. ‘I am a baker! Let me make bread for you and the people,’ he cried. ‘Spare my life!’

“But the king responded, ‘Can you be young again? Can you knead muscle back into your broken and sorry limbs? No? Well then, there is no redemption for you.’ And he motioned to his executioner, who raised his blade, and the baker’s head rolled to the floor.

“How deplorable!” said Abris, interrupting the Illuminator. “Did no one resist the king’s new laws?”

The Illuminator smiled. “Thankfully, there was one who stood against this grave injustice.”

“Our immortal Protector had not been seen in this land for centuries. But perhaps extreme injustice sends ripples that echo far beyond the realms unknown. In any case, at this moment she appeared. The heavens opened with blinding light, as if the stars themselves had focused all their beams in one place. The Protector emerged, wondrous and terrifying in her majesty. She confronted the cruel king, who stood still as stone at her sight.

“‘No king stands above the statutes of the law.’ she declared. ‘Speak thy name and prepare for judgment!’

“‘I am not merely above the law, winged beast, I am the law.’ With a nod, he motioned for his guards to advance. They did so in unison, raising their spears to the sky as one. ‘Because of me, my people have purpose. My people know their place. And my people thank me for it.’

“‘The law is justice given form; it is true and fair judgment writ in ink. It cannot be undone,’ said the Protector.

“She drew her swords, which blazed with holy fire, filling the air with the scent of truth and punishment. Her wings unfolded, which fanned the flames with great strokes, and soon they too were aflame. It was a fearsome sight to see.

“‘You say you lead your people. Be now the first to be judged by my blades,’ the Protector said.

“The cruel king looked upon the Protector’s blazing swords, and her wings of fire. But most fearful of all was the burning in her eyes, gleaming and grave with uncompromising wrath. He felt like he was staring at the sun, beautiful and terrible in her glory, and the King wept in fear. He appealed to the Protector’s mercy and fell to his knees, pleading at her feet.

“‘I can change,’ the king begged. ‘I see now the error of my ways. I was selfish and corrupt and did not deserve my crown. Let me live and I shall follow the rule of law.’

“The Protector watched him with a steely gaze. When he had finished speaking, she drew breath. It is said that her voice in this moment echoed as if the very gods were speaking through her.

“‘Can you undo your deeds of injustice, King?’ asked the Protector. ‘Can you unspeak your lies and unmake your false laws against fair and righteous judgment? No? Then there will be no redemption for you.’

“In one quick motion, the Protector thrust her burning blade through the king’s heart, and he cried out as she impaled him on the gilded lawbook he had cast to the floor.

“The lawbook burst into flame which burned with the terrible heat of the heavens. This was a holy fire—one that would scorch the evil sinners from the land and cleanse the just, leaving them unscathed.

“The cruel king screamed as the Protector’s fire burned his guards and councilmen, his executioner and his servants. The fire did not stop as it spread throughout the land, fueled by the lies of the false king and his wicked followers. The survivors forever remembered this day of glory, for in the ashes of their society they were given a chance to rebuild in justice and honor.

“And, if the land ever returned to unlawful chaos, they were certain the Protector would descend from the heavens once more.”

The Illuminator smiled down at Abris.

“We must all act with virtue and honor,” she said, “from kings to bakers, servants to soldiers. For no one is above the law, and no one is above justice. The raiders who attack and invade our southern borders are lawless and malevolent. With every breath, as they march forward, they threaten the safety of our land. Your role as a shield for Demacia is a great honor, and a just endeavor. And the Protector looks kindly upon those with justice in their hearts.”

“Aye,” said Abris. He looked to his sword, unblemished by acts of war. He vowed that from his first strike to his last, each would be in the name of justice.

The Illuminator bowed and returned to her temple.

Abris watched as the candle he had lit flickered in the dark. He stood up to walk back to his camp for the night. As he turned to look toward the statue one last time, he thought he saw the shine of another flame, deep within the stone helmet of the Protector.

Lore and Events
Retrieved from "https://leagueoflegends.fandom.com/wiki/In_the_Fires_of_Justice?oldid=3088854"
Community content is available under CC-BY-SA unless otherwise noted.