League of Legends Wiki
Register
Don't have an account?
Sign In
Advertisement
in: Lore of Zaun, Short Story, Warwick lore 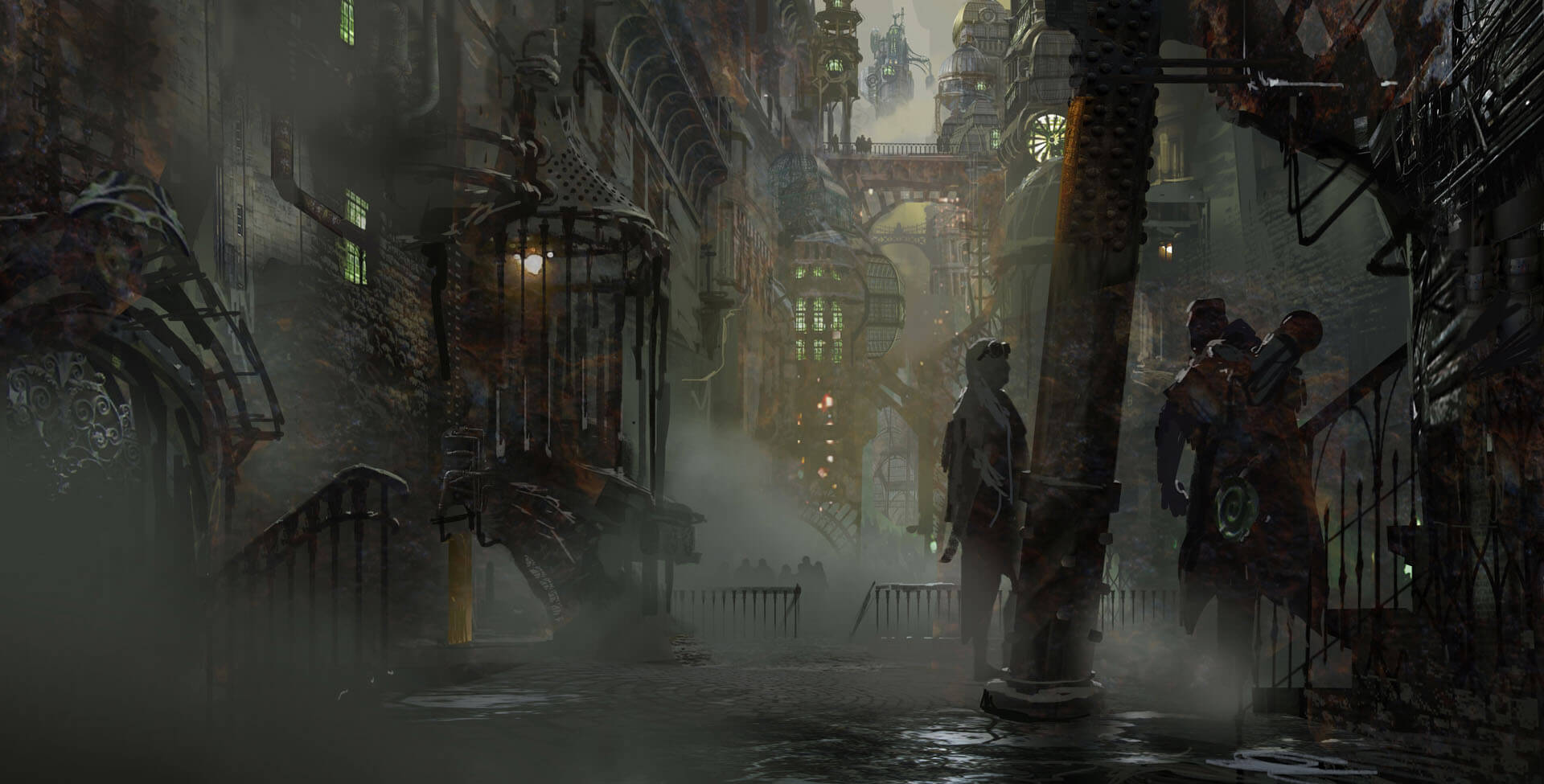 Do they think the shadows hide their misdeeds? The gleam of their knives? The deals they make, shrouded in darkness? I can smell the shimmerwine on a beggar's breath from across this wretched city.

I know their crimes. I can taste them.

Then I see her. She's taking a message from one of Baron Spindlow's men - the lump-faced one, all scars and scowl - and placing it into a pneuma-tube. He mutters instructions to her.

Who knew the dob could even speak, let alone write a message? I've only heard him scream. The last time we met, I took his leg. Its replacement is already rusted.

The cogs clink as they pass from the thug's meaty hand into the girl's. I can smell the blood on the gear-shaped coins. The pain that passes from person to person. If you want something in this city, it doesn't matter how many cogs you have. Pain is the true currency.

I remember a man who knew this - the blood and cogs on his hands - but that man is gone.

I growl, and the two figures flinch in surprise. Even the shadows seem to draw back as my augments cast a sickly, green glow. The girl takes one look and flees, but not deeper into the alley. She's a pneuma-tube runner. She clambers up, into the darkness, taking a path few can follow.

Afraid. Fast, but vulnerable. Carrying a pneuma-tube with a chem-baron's seal. The gangers will come for her.

I begin the hunt.

We move so quickly, the city is a blur - my

claws cutting through the smoke, scrabbling for purchase as I leap across rooftops, following the pneuma-tube runner. Carving a path so deep through the city, it seems to bleed chemtech, toxic puddles gathering in the alleys.

She tries to double back, skittering beneath a cart full of tinctures. She knows the city almost as well as I do. She knows where I'm driving her. Away from sanctuary, toward a place all the runners fear, where only the Zaun Gray escapes.

I need to remind her to be more afraid of me than what lies in the darkness. I land ahead of her, roaring with rage, my claws tearing a chunk out of a steam conduit. She hesitates, but only for a moment, before turning back into the depths. Where I need her to run.

I can hear the gasps of effort as she scrambles up walls and slides down railings. She's praying to the

wind goddess to save her. Perhaps I should do the same. The animal inside me wants more than murder. It wants meat.

I could kill her right now. It would be so easy. I feel my claws emerging, greedy for flesh. I forget why I should spare her, until I draw closer. Close enough to see my reflection in her eyes, as she stumbles on a ledge and looks back.

Her eyes brim with tears.

I pull back and howl into the darkness, driving the girl forward. She drops down into a maze of pipes built for the ancient pneuma system. I follow behind her, hanging back as she reaches the dead end.

The girl thinks I'm going to kill her. That her pale throat is the reason I bare my teeth. But she is only the bait. This is where she'll lure out my true prey.

Those who'd prey on her.

"Well, well. Look what fell outta the Gray", says a ganger emerging from the darkness. He and his friends surround the girl, their blades catching what little light survives in these depths. I recognize their tattered rags. The Gray Nails. A dead man once had dealings with them.

There was another girl...

I shake away the memories. I don't want them.

"I know you", says one of the Nails, her face ringed by piercings. "You run for Boggin, eh? One 'a Spindlow's mugs. What's that krovin' psycho got to say that he don't want us to hear?" She pokes the pneuma-tube with her dagger and smiles.

"Please, you don't understand!" the girl sobs, scanning the gray darkness behind her and trying to rush past.

"Neither do you", the first ganger says. "We're gonna have some fun."

I hesitate as the thug knocks the pneuma-tube from the girl's hands. It's worth more cogs than their own lives. It's their ticket out of this miserable pit, to a slightly less miserable one.

I thought the pneuma-tube would distract them for the moment I needed. It cracks against the alley stones, Spindlow's seal broken.

What have I done?

The runner cries out as a Nail grabs her roughly. There's a struggle, a flash of steel, and then... blood.

chamber on my back pumps, and I am lost.

"It's him! The Howler!" a Gray Nail cries out as I race into the clearing, trying to focus on the punk. I slash into him, and the alley wall steams with red mist. He crumples to the stones.

Where is the girl? I've lost track in the mayhem. Surrounded. Blades stabbing like clumsy teeth. Claws a metal blur.

Jaws clamp down, and bones crack along with armor.

I see her now. One of the Nails hovers above the girl, his shiv raised. I can stop him.

But the machine pumps again, and my limbs surge with power.

I turn, following them into the night. I have no choice.

They are the monsters I hunt. And I am one of them.