Icathia City was the capital of Icathia, before its fall. 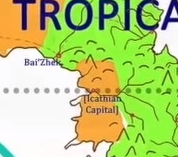 A great and terrible battle was fought against the Void before the walls of ancient Icathia. In the aftermath, the lands all around the damned city became deserted wastes, and its very existence was struck from the maps of Shurima. It was hoped, perhaps foolishly, that the horrors unleashed there would eventually be forgotten.

Icathia
Retrieved from "https://leagueoflegends.fandom.com/wiki/Icathia_City?oldid=3116693"
Community content is available under CC-BY-SA unless otherwise noted.