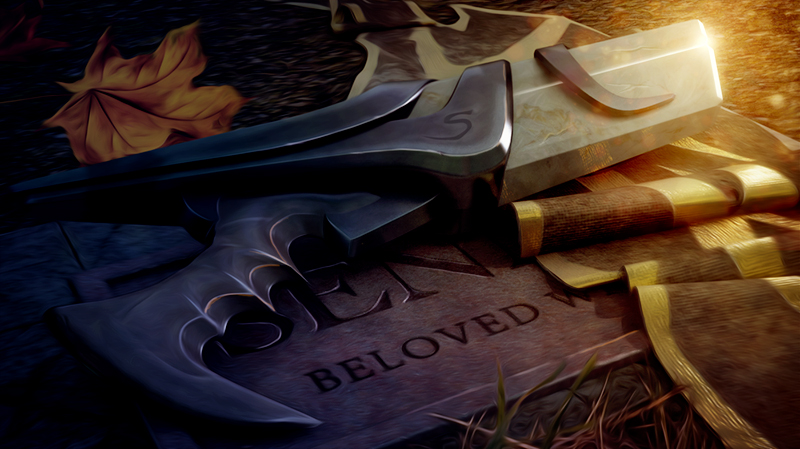 They came at Lucian in a blur of shadow, lunging at him with insubstantial talons and ancient, rusted blades. They moved fast… but he was faster.

He moved like a dancer, turning and spinning, ever in motion, the relic pistols in his hands lighting up the rotting interior of the inn with their blazing, arcane light.

Lucian’s long leather coat and tightly bound locks whipped around him as he moved, effortlessly avoiding the frenzied attacks coming at him from every direction. Every shot he fired burned with the intensity of the sun, banishing one of the screeching spirits, sending them reeling back into formless darkness.

He took no satisfaction in this duty. Not anymore. All the light in his world had been snuffed out when she had been taken.

Dark talons raked across one of Lucian’s forearms, making him hiss in pain. Cursing himself for being momentarily distracted, he destroyed the offending spirit with a blast of light to its head, and focused upon the task at hand. Standing firm in the center of the inn, he gunned down the tide of spectral forms rushing at him, every shot lighting up the darkness.

At last he was alone, arms spread wide, weapons pointed in opposite directions, their stone tips still glowing. He glanced left and right, awaiting another attack. The fire in the inn’s hearth seemed to burn more brightly, banishing the deeper shadows, and the icy chill retreated.

Suddenly weary, Lucian righted a fallen bench and sat with a groan. He placed his pistols upon the table, then turned his attention to his wound.

Wincing, he slid the long, black glove from his left hand. The leather was unmarked, but the flesh of his forearm was blackened where ghostly talons had slashed him—almost like frostbite.

He caught a flicker of movement in the corner of his eye, and Lucian was instantly on his feet, both pistols aimed at… a dark-haired girl, barely into her teenage years, who had emerged from her hiding place in a back storeroom.

She froze, staring up at him, eyes wide and unblinking.

“Shouldn’t sneak up on people,” Lucian said, lowering his guns.

He made to turn away, but caught a shadow of movement reflected in the girl’s eyes. He spun, swinging his weapons around, but this time he was not fast enough.

A wraith lunged from the receding gloom—an emaciated, insubstantial creature, swathed in shrouds. Pale, blue-green light spilled from its eye sockets and gaping mouth, and it lashed at him with talons the length of daggers.

Lucian was hurled backwards by the force of the blow, flying over the bar, some fifteen feet distant. He slammed into the wall, shattering dozens of empty liquor bottles lined up on the shelves, and fell to the floor in a shower of broken glass. His chest burned where the wraith had struck him, and an icy chill clutched at his heart, making him gasp for every breath.

He searched frantically for his weapons. He spied one, lying on the uneven floor ten paces to his left. Too far. The other had spun across the floorboards, before coming to a halt at the girl’s feet.

She picked up the ancient weapon and aimed it at the wraith, clutching it with shaking hands as the thing lunged towards her, its mouth opening impossibly wide.

“It won’t fire!” she wailed, backing away. “There’s no trigger!”

An echo of memory rose in Lucian’s mind, as sudden as a knife strike.

“But how do you fire it?” Lucian said, looking down at the exquisitely crafted weapon, a look of puzzlement on his face. “There’s no trigger.”

“It doesn’t need a trigger, my love,” said

Senna, her eyes glinting with amusement. She touched him lightly on the side of his head. “The trigger is in here.”

Senna aimed her own weapon—a more elegant version of the one he held—at the target twenty feet away. Her expression hardened, her eyes narrowing. “You have to will it to fire,” she said, and the target exploded in a searing blast of yellow flame.

“Right. Will it to fire,” said Lucian, leveling his pistol at the next target. Nothing happened. He shook the pistol, and snorted, partly in frustration, and partly in bewilderment.

“It requires control,” said Senna. “It requires focus. You need to will it to fire with every fiber of your being.”

Lucian laughed and turned to Senna, one eyebrow raised. “Every fiber of my being?”

He did, but couldn’t keep a smile from curling at the corners of his mouth. “I give up,” he sighed. He stepped in close to Senna, and drew her into an embrace. “How do you expect me to focus on anything else when you are near?”

Senna pushed him away, laughing. “You’re not getting out of this that easily,” she said. “Again. And actually try this time.”

The girl was backed up against a wall now, the slender relic gun—Senna’s gun—a useless weight in her hands.

“Throw it to me!” Lucian barked, darting forward.

The girl shrieked as the spirit flew toward her, and hurled the gun in Lucian’s direction. It spun end-over-end through the air, passing straight through the wraith. Lucian deftly caught it in mid-sprint, simultaneously dropping to one knee and sliding across the floorboards to scoop up his other weapon. He came to his feet with both pistols ready, and opened up.

The wraith screamed and tried desperately to escape, coiling and spinning through the air away from him, but Lucian was relentless. He dashed sideways, maintaining his strafing torrent of fire. The blazing light tore through the ghastly apparition, and its cry became piteous as its dark form dissipated, like mist beneath the rising sun.

Lucian came to a halt, though he kept the pistols raised. All was silent once more.

He didn’t answer immediately, his narrowed eyes scanning the room. At last, he holstered the two guns. “It’s gone. You are safe.”

“I… I couldn’t make it fire,” the girl said, staring at the darkness. “I thought I was going to die. Like the others.”

Lucian remembered his own difficulty with the weapon—it felt so long ago now.

“I certainly have focus now, my love,” Lucian murmured, under his breath.

“Did you say something?” asked the girl.

“No,” Lucian replied. He cocked his head. The sound of rattling chains was coming from somewhere nearby. “Do you hear that?”

The girl shook her head. “I don’t hear anything.”

He turned to leave the inn, cursed to follow that distant, tormenting sound.