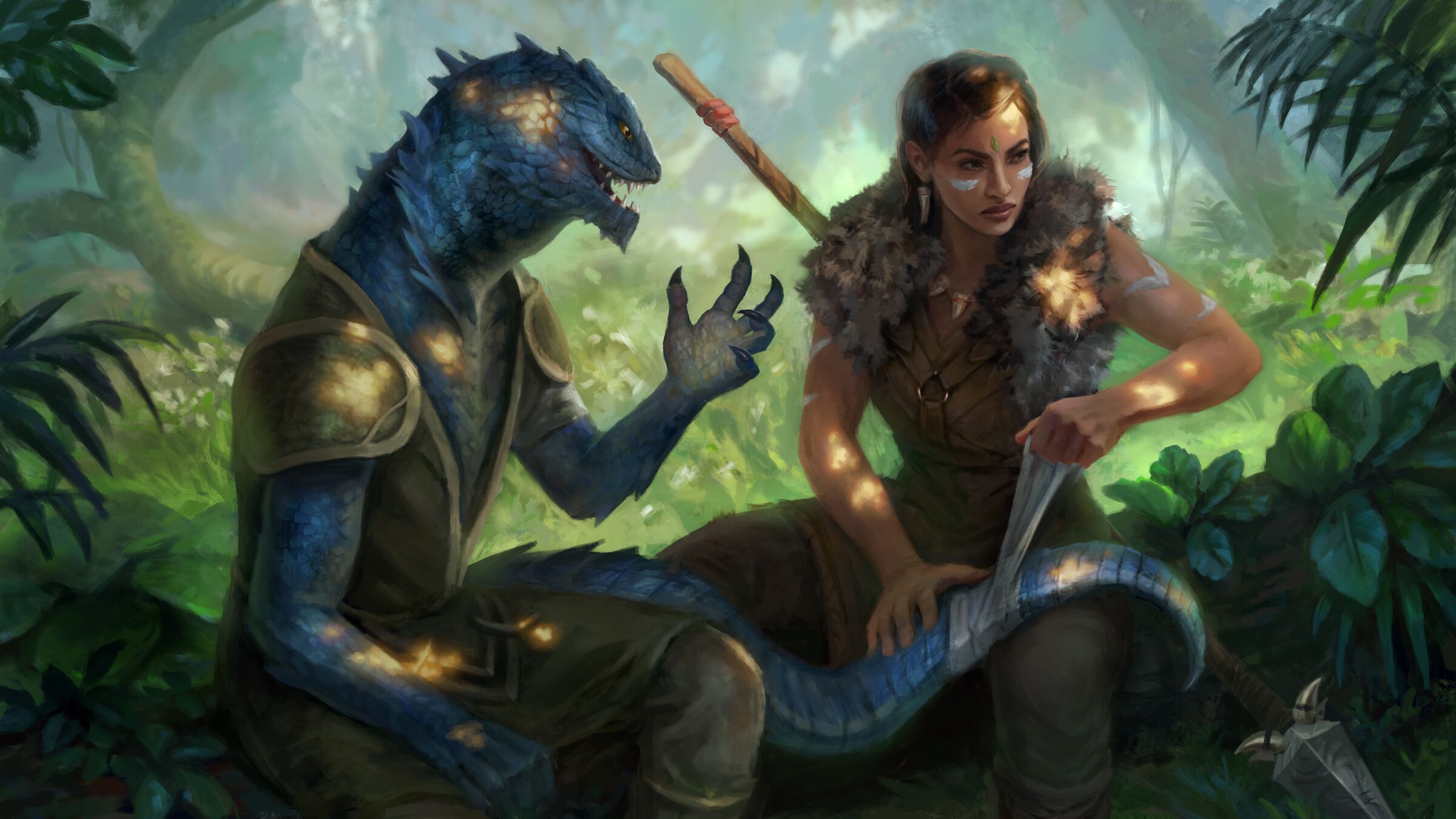 These sounds and smells did not belong to the forest.

The huntress bounded towards the sound, spear at the ready. She followed the acrid scent through the maze of trunks and thick underbrush.

Before long, she came upon a familiar place—a small clearing by an embankment. This was a quiet place teeming with life, split by a shallow stream of fast-running water. The fish were so plentiful, even a cub could catch them with clumsy paws. The calm air was rent by the howls of something, or someone, in great pain.

Nidalee chose a spot behind a thick tree at the stream’s edge, careful to conceal her spear behind its trunk. Just across the river knelt a vastayan male with reptilian features. He clutched at his shoulder, and though he moaned in pain, his eyes were wild with rage. The huntress saw his long tail was caught in a trap. Huge metal teeth had bitten into his scaly flesh.

A human holding a long, ugly weapon loomed over the vastaya. Nidalee stared at the dead, shining wood wrapped around the metal barrel. She had seen these things before. They fired lethal seeds that could easily pierce a target, and these seeds traveled too fast for her eyes to follow.

She stepped out from behind the tree, purposefully crunching dead leaves underfoot. The man turned his head in her direction, but kept his weapon aimed at the wounded vastaya. He could not see her spear.

“My, my. What have we here?” The human looked her up and down, his eyes hungry. “Are you lost, love?”

The huntress knew how to handle his kind. Humans were so often disarmed by her appearance—their eyes saw only the softness of her features. She remained expressionless, carefully gauging the distance between them and adjusting her grip on the spear. Her eyes rested on the weapon in his hands.

He smirked at the wild woman, taking her stillness for fear. “Never seen one of these before? Come have a look. I won’t hurt you,” the man coaxed. He turned away from his prey to hold out his weapon.

As soon as it was pointed away from the vastaya, Nidalee whirled out from behind the tree. She hurled her spear at the human’s torso and dove across the river, enveloping herself in a fierce, feral magic. In a flash, her features shifted—nails hardened into harsh points, skin sprouted flaxen fur, and bones bent into a slender shape.

The man dodged too slowly. The spear cut through the flesh of his upper arm and knocked him onto his back. Nidalee landed on top of him in the lithe form of a cougar, each sharp claw piercing through his thin clothing. She pressed her front paw down on his fresh wound, earning a howl of pain.

The cougar crouched over the man, opening her jaws wide and bringing her sharp teeth against his throat. The human shrieked as Nidalee bit slowly into his neck, just deep enough to draw blood, but not to kill. After a few moments, she released the man’s throat and brought her face into his view, baring her bloodied teeth at him.

Another gust of magic swirled around her, and again she took the form of a woman, her sharp teeth somehow no less menacing. Still crouched over him, she looked down at him through bright, emerald eyes.

“You will leave, or you will die. Understand?”

The huntress did not wait for an answer. She tore a piece of fabric from the man’s shirt, and approached the wounded vastaya. Within seconds, she disarmed the trap around his tail. The moment he was freed, he lunged for the human.

Nidalee grabbed the vastaya’s arm, holding him back. The man, who had been frozen in fear, saw his chance to flee, and hurriedly crawled from sight.

The reptilian wrested his arm from Nidalee’s grip, sputtering and cursing in a language she did not recognize. Then, in a familiar tongue, he demanded, “Why did you let it go?”

Nidalee pointed to where the human had fled, indicating spots of bright red blood. “We will follow him. If there are others, he will lead us to them. If they do not leave, they will die together.”

The vastaya did not look satisfied, but said nothing. Nidalee knelt by the river and washed the cloth she had torn from the man.

“You called it… human.” He spoke with a strange lisp. His mouth was very wide, and his forked tongue flicked out between words.

Nidalee wrapped the damp, clean fabric around his shoulder. “Yes.”

“You are not human?”

“There is no vastaya like you. You are human.”

Nidalee pulled the fabric tightly around his shoulder, causing him to hiss in pain. She managed to conceal her smile by using her teeth to secure the knot.

“I am called Nidalee. You?”

“Kuulcan. Tonight, my family hunts. You will join us.”

The vastaya stretched his arm, testing the bandage. It was tight, but did not hinder his movement. He looked up at the huntress, who stood above him with her arms crossed.

Percy sat by the fire, his face flushed a deep red—partly because of the adrenaline, partly because of the beer, but mostly because of the embarrassment. He had told his three companions of the wild woman, and they hadn’t stopped laughing. One of them took it upon himself to prance about the fire with his guitar and sing a lewd prayer to the “Queen of the Jungle” while the other two guffawed and danced.

“Keep it down, you damned idiots,” he pleaded, earning an even louder roar of laughter. “She might hear us.”

Tired of the taunting and full of far too much ale, Percy snuck away from his fellow trappers to answer the call of nature. The wound still hurt something fierce, and no amount of drinking could chase away the feeling of her teeth on his throat.

As he refastened his belt, he realized the singing and laughing had stopped. The wind itself had stopped blowing. He could hear no rustling leaves or swaying branches.

Beyond the dim light of their low fire, their camp was surrounded by total darkness. Far ahead past the edge of the camp, something glinted in the shadows. Percy rubbed his eyes and squinted, struggling to see anything in the dark.

All at once, the undergrowth began to heave and creak. The leaves of every fern and tree shook with movement. Countless pairs of eyes opened before him in the darkness, and a chorus of growls and feline hisses deafened him.

Percy recognized the emerald eyes nearest to him. There was no trace of humanity left in them now. The eyes blinked and disappeared, and a voice snarled in his ear.

He did not manage to scream before the sharp teeth closed around his throat—and this time they did not stop when they drew blood.
▲ TOP ▲

Lore and Events
Retrieved from "https://leagueoflegends.fandom.com/wiki/Human_Blood?oldid=3150578"
Community content is available under CC-BY-SA unless otherwise noted.