Unique – Hypershot: Dealing ability damage to a champion with an ability that is neither unit-targeted nor auto-targeted at more than

reveals them and increases your damage dealt to them by 10% for 6 seconds.

Horizon Focus is a legendary item in 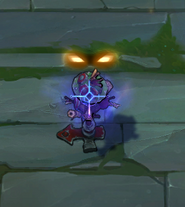