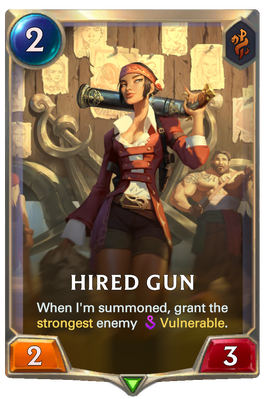 Strongest enemy that doesn't have

"This your picture? Oof, you're even rougher on the eyes than advertised--let's hope your head's worth my while."

Legends of Runeterra
Retrieved from "https://leagueoflegends.fandom.com/wiki/Hired_Gun_(Legends_of_Runeterra)?oldid=3091572"
Community content is available under CC-BY-SA unless otherwise noted.