League of Legends Wiki
Register
Don't have an account?
Sign In
Advertisement
in: Lore of Freljord, Short Story, Lissandra lore

Hero of the Frost Moon 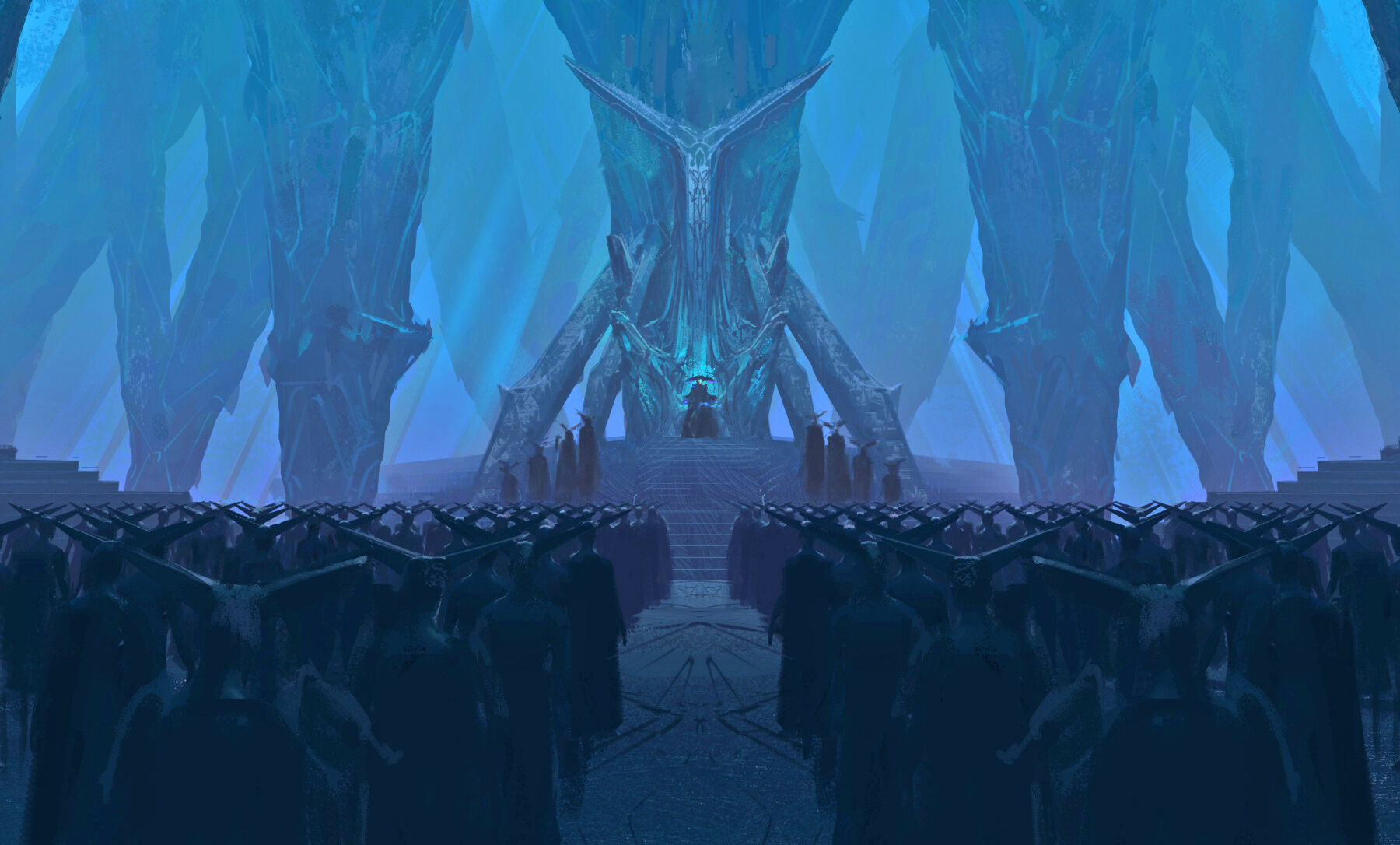 Hero of the Frost Moon

A hero is anyone who answers the call to do what must be done.

A hero is anyone who answers the call to do what must be done.

They sacrifice so much because of a singular truth: this fragile world requires protection.

This means everything to Lissandra, who rarely rests, especially not on nights like tonight, when stars align in strange ways. The round apex of her private sanctum features many rune-inscribed windows to harness the powers from various celestial syzygies.

Thousands of dark, coffin-like ice formations protrude from the snow-carpeted ground. They rise like great black teeth, jutting up from the depths below, poised to devour the sky. She knows exactly how far down these boulders descend, where their roots terminate, and their purpose.

Lissandra strolls through this unique structure. Under this alignment of the Frost Moon and the Cold Star, she sees more without eyes than anyone who has ever dared set foot in this sacred space. Although it is quiet as a tomb, she hears what no one else can—the voices of the half-dreaming and half-dead trapped within each crystalline monolith.

An ancient troll-king says nothing. Its deep-set eyes scream with malice as it tracks her path. When she passes out of sight, the troll-king’s growl shakes its black ice keep.

Lissandra counts thirteen steps from the troll-king to her knight in rusty armor. Tonight, he speaks first.

"Kill the Ice Witch!" he says. His eyes half-lidded, his grim face stoic. His teeth are broken from decades of gnashing.

But his refrain catches on, as Lissandra winds through the forest of midnight ice.

"Kill the Ice Witch," becomes a rousing chorus, with voices from across the world, all suspended in stasis, reliving the moment they killed said Ice Witch.

As for the Ice Witch herself, she finds it beautiful when such a diverse crowd rallies behind a single course of action. Their tortured nightmares lull others to sleep. Tonight, though, one voice is peculiarly silent.

Lissandra weaves her way through the crevasses between crystals, toward one of the most exotic heroes in her collection. Silence breeds mysteries, and she loves coaxing secrets from unspeaking lips... She feels a shift in temperature, an aura of warmth.

She is not alone. Someone uninvited walks her menagerie. Her footfalls are whispers on the snow as she follows the trail of warmth.

"Release my sister, witch!" a voice, gruff and husky, cries out.

Lissandra turns toward this unseen threat. Up, is all she has to think for blade-like shards of ice to erupt from the ground, blocking the intruder’s path. She hears wind gush from the infiltrator’s lungs. Then the soft thud of the fall.

"Demands without a greeting make for ill-mannered guests."

The would-be interloper finds a shred of courage, then her voice.

"M-My sister is Hara from the Caravanserai of Gilded Scarabs. She dreamt of eight hundred years of ice unless she slew the Prophetess of Frost." The girl mustered some defiance. "Release my sister, witch, and I shall spare your life."

Lissandra finds no need to waste good breaths on a pitiful laugh.

Lissandra runs her bony fingers across the surface of Hara’s casing and listens to the voice trapped within. The guest’s name dances on Hara’s tongue, and now on Lissandra’s as well.

"You ignored your sister’s command, Marjen. You abandoned the caravanserai."

Marjen recoils from hearing her name on the Ice Witch’s tongue.

"We are similar. I too deplore the pleas of unwise sisters."

"Release her now, or I will end you."

Marjen brandishes a blade that warms the bitter cold. It reeks of familiar and particularly hard-headed magic. Forged by an older spirit whose name Lissandra erased from the Freljord’s memory.

"Consider the Ice Witch’s offer. I shall relieve you of that warm dagger, and in return, reunite you with your dear sister Hara."

The alignment of the Frost Moon with the Cold Star completes itself. Lissandra cannot see the shimmering pale blue light descending on the grotto. She wonders how it looks to this woman, born in the Great Sai.

"You are smarter than almost everyone here." Lissandra’s blue lips stretch into a crooked smile.

"Kill the witch!" Hara screams from inside her own dark prison. Marjen’s heart beats out of time.

And her arm follows through. The blade arcs through the cold air. It plunges into Lissandra’s chest.

"You listened to your sister..."

Lissandra slumps to her knees, then topples over. Silently falling snow shrouds her body.

Marjen turns to Hara, encased in cracked ice. Its surface runs slick with brackish meltwater. Dark water pools on the white snow. Whatever magic that held her ebbs.

The cracks widen in Hara’s prison as she struggles to break free. Finally, the edifice crumbles and there she is, kneeling by Marjen’s side in an inky puddle. Relief sweeps both their faces as they embrace.

"We did it," Marjen says. "The caravanserai is safe. There is no eight-hundred-year freeze coming."

"Sisters who listen..." Instead of Hara’s voice, she hears the cold, calm voice of the Ice Witch. "...are the easiest to trick."

Marjen breaks their embrace. Hara’s eyes widen at the words pouring out of her mouth. Her lips mouth a single word.

Only Marjen can't. Her fur-lined leather boots have iced over, freezing her to the ground. Black ice crawls up their legs.

"I-I killed..." She looks to Lissandra’s body, but sees only virgin snow. That’s when she sees the blade still in her hand.

The realization dawns on Marjen.

"I never threw the knife."

A flash of chalk-white catches her attention. She looks up to the rune-inscribed window above. Where there should be a Frost Moon over a Cold Star, a pair of dark blue lips stretch into a mocking grin.

"Sisters," Lissandra whispers to the two women inside their frozen tombs, "inseparable, devoted, but still so utterly foolish..."

Marjen and Hara, their arms wrapped around each other in a sisterly embrace that turns to terror. They lock eyes as the dark ice entombs their faces.

Lissandra admires her latest acquisition. "I found it more convenient to lose mine."

Where a single rock of black ice once stood, two now stand, joined together at the base. Sisters perpetually reunited—Marjen and Hara from the Great Sai, their bond stronger than the distance between tundra and desert. A reunion so powerful, Lissandra tastes the satisfaction of the feasting monsters below. The illusions cast by the dreams of the sisters, projected through ice, will keep the beasts slumbering a little while longer.

How exhausting this work is, lulling monsters to sleep.

Tonight, Lissandra too may rest. For the hero protects this fragile world just a little bit longer.