Heimerdinger requires all the rigor of the scientific method. Given his upcoming PBE launch, more and more evidence from the experimentation is surfacing.[1]

The first major discovery proved the mass previously known as Heimerdinger’s brain is actually hair. After what must have been days of cutting, styling and shaping, Heimerdinger returned to his lab to experiment with his new do. 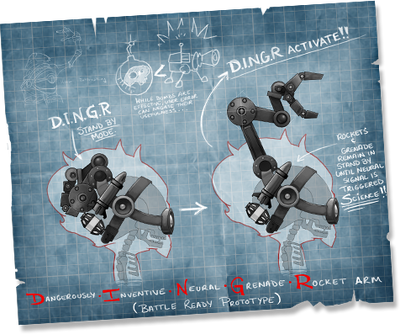 With his hair density significantly reduced, Heimer implemented a long languishing invention: the

D.I.N.G.R., a neural-engaged robotic arm. This schematic shows the arm of the

D.I.N.G.R. lying in wait for Heimerdinger's supercharged grey matter to raise the apparatus and launch a bevy of

grenades at the enemies of science and progress.

But Heimer can't call anything an upgrade if his

Alien Invader or entering the

Heimerdinger visual update out of the lab!

A good long tinker with the

'Dinger yielded some epic upgrades to his

grenades. Now the updated Heimerdinger struts out of the lab and onto the Rift. Because the diminutive inventor isn't all explosions, a spiffy new do adds some style to the dangerous substances.

The Art of Heimerdinger 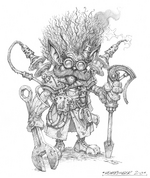 We knew that the 'dinger was an Einstein-esque mad scientist, but his original design made it unclear whether he was a yordle or just a short hairy dude. Reworking Heimerdinger helped us understand what we wanted the rest of the yordles to be. Using Heimer as a model, the loosely-related collection of unkempt critters became a proper species with clearly-defined proportions (jumbo heads, slender limbs) and fur/hair absolutely everywhere.[3]

Retrieved from "https://leagueoflegends.fandom.com/wiki/Heimerdinger/Development?oldid=3068445"
Community content is available under CC-BY-SA unless otherwise noted.