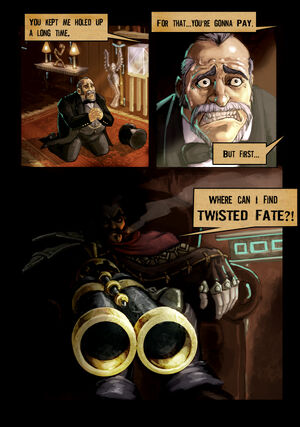 If you've ever had a nemesis in your life that made you want to call him out for a showdown like the no-good, low-down, varmint, snake-in-the-grass that he is, you'll probably have a bit in common with this next champion. Allow me to introduce

Graves, the Outlaw. In addition to being one of those crack-shot renegade types, Graves is possessed of a particular disinclination towards everyone's favorite Southern gentleman,

Whatever the result of his arrival in the League, one thing's for certain: Somebody's going to go out with a bang!

We wanted to take this opportunity to preview some of the gameplay on our newest ranged DPS champion:

This rough-and-tumble gunman uses a massive, hextech double-barreled shotgun to rain down death from a distance and punish any foolish varmints that get too close. For example,

Buckshot shoots three quick shrapnel bursts in a cone in front of him. Unlike other multi-missile spells, however, all three

Smoke Screen to limit enemy vision and slow them in an area, while

Quickdraw lets him dash in for a quick shotgun blast or escape danger as needed. In this way he can control his positioning to set up maximum damage

Finally, Graves can use

Collateral Damage to unleash a skill shot that nukes the first target it hits, spreading a cone of damage behind its target to hit anybody yellow enough to hide behind the tanks. While the single-target use is simple, properly utilizing the cone is what will separate the good Graves players from the great ones.

Our goal with Graves was to make a ranged DPS that had some incentive to get up close or make enemies think twice before getting in your face. While it's completely possible to play Graves as a standard max-range carry, this dichotomy makes for skill differential without adding a high barrier to entry (or any hefty, paragraph-long tooltips) Whether trying to maximize the close-up damage of

Buckshot, or setting up the 1-2 punch of

Collateral Damage, we're excited to add a champion with

Graves has always been about getting up close and personal to whatever he wants to make holes in, and now he's even stronger at that. We dare you to dive him.[3]

Buckshot, meaning his basic attacks deal area of effect cone damage and knockback minions, although the three (yep - his shotgun still fires three rounds, and no, we still can't explain it) rounds can each be blocked. Still on Graves' basic attacks, he actually has an ammo system now, and reloads his gun after firing two rounds. Every round that lands reduces the cooldown on

Quickdraw, which no longer grants attack speed but does reload his gun. Finally, we're tweaking

Buckshot, giving it a unique

T shape attack that deals two rounds of damage. We could try to explain it, or you could just watch the video.

critical strike) dealing base damage for the first bullet hit and bonus damage for each additional bullet. Attacks cannot pass over units, but

knock back all non-champions. Destiny works off of an ammo system, and Graves must

Graves fires out an explosive canister that deals damage to enemies in a line, leaving behind a trail of gunpowder. After a couple seconds, the canister detonates the gunpowder trail, dealing additional damage. If End of the Line collides with a wall, it explodes immediately.

slowing enemies, and creating a cloud of Black Smoke that lasts for a period of time. Enemies inside Black Smoke cannot

Graves dashes forward, reloading one bullet while moving. For a few seconds Graves gains bonus armor and bonus magic resistance. This bonus can stack. Basic attacks lower the cooldown of Quickdraw and, when Graves attacks non-minions, he also refreshes his defensive bonuses.

Graves fires an explosive shell with so much force that it

knocks him back. The shell deals massive damage to the first enemy hit (or it reaches the end of its range) before exploding in a cone, dealing additional damage to enemies behind.

It's time to Pool Party!

Retrieved from "https://leagueoflegends.fandom.com/wiki/Graves/Development?oldid=3060664"
Community content is available under CC-BY-SA unless otherwise noted.