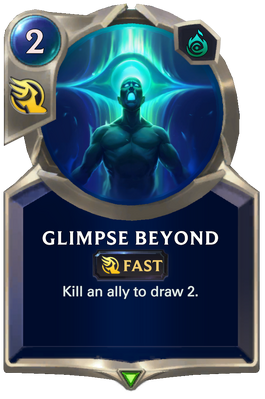 Kill an ally to

"I have erred. We were not meant to peer beyond the pale curtain. Whatever insight lingers there comes at far too great a cost." - Arie Wrence, Dauntless Vindicator

Legends of Runeterra
Retrieved from "https://leagueoflegends.fandom.com/wiki/Glimpse_Beyond_(Legends_of_Runeterra)?oldid=2958320"
Community content is available under CC-BY-SA unless otherwise noted.