"This kingdom, and its people, have given me everything. What kind of man would I be if I gave any less in return?" -

A proud and noble warrior, Garen fights as one of the Dauntless Vanguard. He is popular among his fellows, and respected well enough by his enemies—not least as a scion of the prestigious Crownguard family, entrusted with defending Demacia and its ideals. Clad in magic-resistant armor and bearing a mighty broadsword, Garen stands ready to confront mages and sorcerers on the field of battle, in a veritable whirlwind of righteous steel.

Born to the Crownguard (an honorific given to the family charged with protecting the king) Garen and his younger sister,

Lux, come from a long and noble Demacian lineage. Garen's father, Pieter, devoted his life to the defense of King Jarvan III, and in preparation of the inherited honor, Garen trained to defend the king's son,

Jarvan IV, should he be the next to rule. Knowing the important role he would play in adulthood, Garen's family instilled in him an unshakeable pride for Demacia and everything it stood for.

Demacia was founded by the weary survivors of the Rune Wars, those looking for a life of peace after enduring the unspeakable destruction that came from the misuse of magic. Many wouldn't speak of those dark times, but Garen's uncle spoke of it often. He was one of Demacia's best scouts. Vigilant in his pursuit to keep Demacia safe from magic, Garen's uncle would brave the wilds beyond the wall to root out magical threats. He told Garen that the outside world held innumerable wonders, but it also possessed innumerable dangers. One day, something - whether it be mages, the creatures of the Void, or something unimaginable - would attack their walls because times of peace are never long for this world. Yet they are longer when they are defended.

Seven months later, Garen's uncle died in a tragic accident. It was said he was slain in battle, but Garen soon learned from the whispers throughout his family's estate a mage's bloodletting spell had taken his uncle's life. This confirmed Garen's worst fears about the horrors of magic and he vowed angrily to never let its presence within Demacia's walls. Only by following Demacian ideals, only by displaying Demacian strength, could the kingdom be kept safe from the corrupting influence of magic.

All of Demacia seemed to rally around Garen after the death of his uncle. Strangers on the street, including commoners with little to call their own, expressed their condolences, gave him gifts of respect, and offered adages of support. He was surrounded by compassion and saw Demacia as a kingdom of unity where people took care of one another, healing wounds of others as if wounds to themselves. He saw an ideal Demacia, where no one was ever truly alone.

Still, the impending threat of magic loomed over Garen's mind, often making monsters of shadows. He wrestled with a gnawing suspicion that his sister, Lux, possessed magical powers, but never let himself entertain the idea for long. The thought of a Crownguard being capable of the same forbidden powers that killed their uncle was too unbearable to confront.

At twelve, he left home and joined the ranks of the Dauntless Vanguard. His days and nights were consumed with training and the study of war, foregoing close friendships and romantic relationships. He devoted every waking moment to perfecting his swordsmanship, even after his lessons had ended. Most nights, his superiors had to take away his practice sword so he wouldn't sneak out and spar with his own shadow.

While training with the Vanguard, Garen met Jarvan IV - the boy likely to become Demacia's next king, and thereby Garen's future ward. Jarvan's presence spurred Garen to fight even harder - he saw greatness within the prince even at his young age. They became fast friends, always eager to spar against one another. When their training was complete, Garen gave Jarvan a pin embossed with the sigil of the Demacian eagle as a reminder that he would always look out for his newfound brother.

During the Noxian assaults on Demacia, Garen gained a reputation as a particularly fearsome fighter - one of the greatest in all Demacia, willing to risk life and limb to protect his fellow soldiers and defeat the enemy. He took a crossbow bolt to the chest to save one of his men during the search for the Freljordian ever-filling goblet. He walked armorless through the Silent Forest to ambush the fetid servants of the Rancid King.

Despite his courage and skill, Garen's greatest failure came in the midst of a Noxian offensive, where he was unable to protect his prince. Against his counselor's advice, Jarvan IV and his troops pursued a retreating band of Noxians. The young Jarvan was determined to avenge the hundreds of massacred villagers, and failed to see the recklessness of his plan. The Noxian retreat was a trap, and both he and his men were captured.

Garen was furious at himself for failing to be there when Jarvan needed him most. He had known Jarvan was prone to making rash decisions in the heat of battle, and blamed himself for not anticipating the prince's impulsiveness. Garen led a detachment of knights and rode out in search of his captive prince.

Garen and his men discovered the Noxian camp, only to find Jarvan's armor discarded next to a bloodsoaked executioner's post. The Demacian eagle pin glinted up at him from the sticky pool of blood. Though Garen combed the wilderness in search of the prince, he knew in his heart that Jarvan was dead.

For days, Garen was inconsolable. He couldn't stop blaming himself for the prince's death, even as his family and fellow soldiers tried to convince him otherwise. He remembered how the kingdom rallied around him following his uncle's demise, and wished he could do the same for the kin of his fallen soldiers. He took up residence in the barracks with his fellow soldiers in training, and all that he earned went toward supporting the families of the fallen.

Hearing of this, King Jarvan III was impressed with Garen's humble and pure reflection of Demacia's ideals. The king grieved for his son, but recognized Garen's courage, a warrior who viewed all Demacians as if they were his own family. The king honored Garen, reminding his people that Demacians never stand alone - in battle, or at home.

Though Garen's sister, Lux, had followed in her brother's footsteps, coming to serve the crown in Demacia's capital, their relationship remained distanced. Garen refused to acknowledge the things he'd suspected of her before he left to train with the Vanguard. Though he always loved his sister, some small part of him had a hard time getting close to her. He tried not to think about what his duty would force him to do if his suspicions were ever confirmed.

Today, Garen stands ready to defend Demacia with his life. In the rare occasions a rogue mage or Noxian spy is discovered to be within Demacia's borders, Garen is the first to volunteer his sword. He stands resolute on Demacia's wall, defending his home from all foes. Garen is more than Demacia's most formidable and feared soldier, he is the embodiment of her core values - Strength, Courage, and Unity. 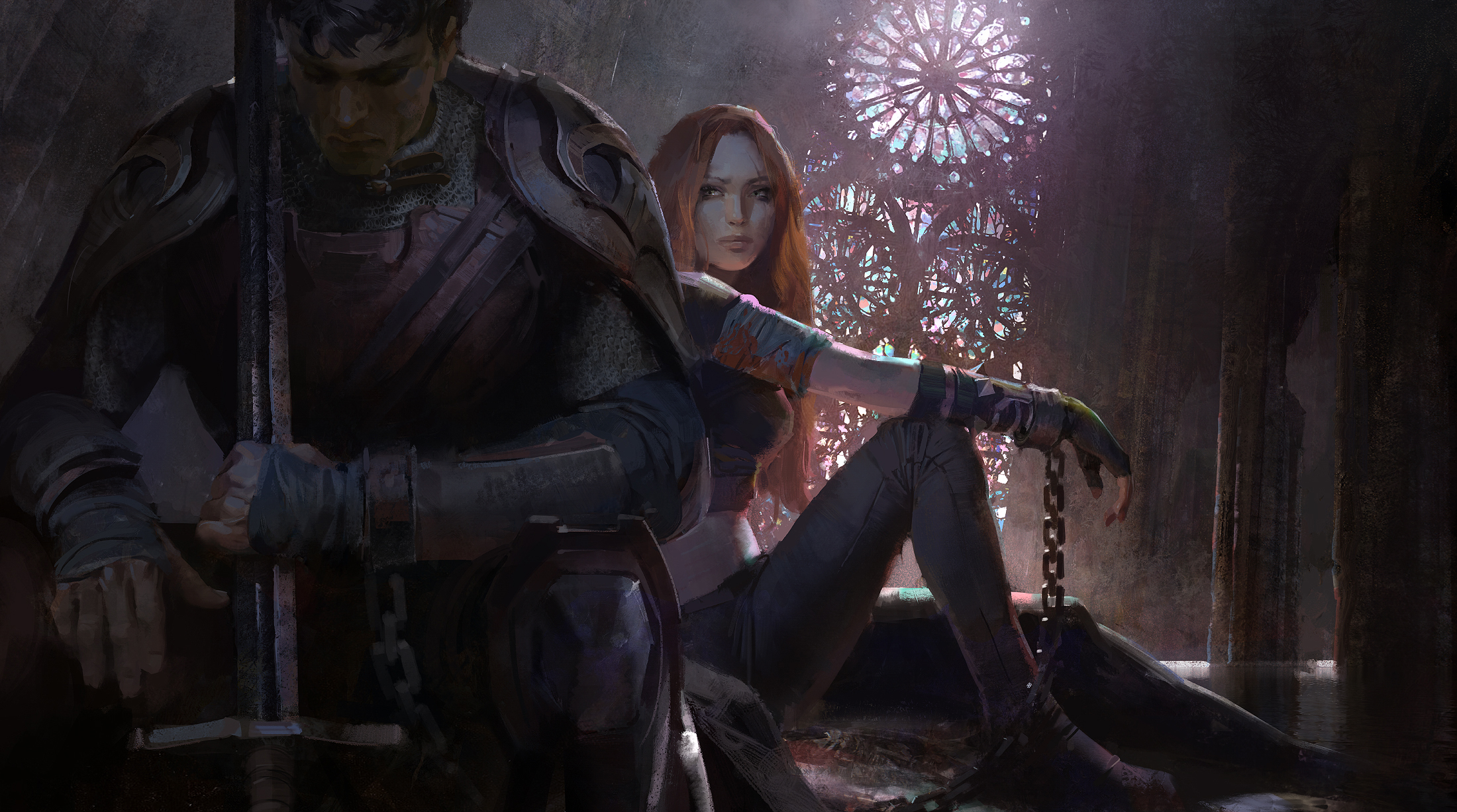 Enemy of my Enemy

Two sworn enemies discover a newfound respect for each other when they're forced to put their differences aside and work together against a common enemy. 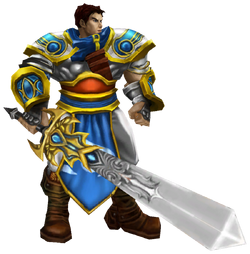 "The most effective way to kill an opponent is to slice through the man next to him." -

Throughout Valoran, the resolve of Demacia's military is alternately celebrated or despised, but always respected. Their 'zero tolerance' moral code is strictly upheld by civilians and soldiers alike. In combat, this means Demacian troops may not make excuses, flee, or surrender under any circumstance. These principles are espoused to their forces by unrivaled demagogues who lead by example. Garen, the valiant warrior who bears the title 'the Might of Demacia', is the paradigm to which these leaders are compared. Thousands of great heroes have risen and fallen on the bloody battlefields between Demacia and its preeminent rival, Noxus. It was beneath their mighty banners of war that Garen first met steel with

Katarina, the Sinister Blade. The infantrymen who beheld this event (and survived) commented that it seemed as though the two were locked in a mortal waltz against a symphony of clashing blades.

Garen, the pride of the Demacian military and leader of the Dauntless Vanguard, returned from this battle breathless for the first time in his career, though some speculate that this was due to reasons other than exhaustion. The plausibility of these rumors was bolstered when, in every instance thereafter, Garen seized the opportunity to encounter the Sinister Blade again. A paragon of Demacian ethic, Garen never entertained such allegations, for he knew others couldn't understand. Even simply the pursuit of a worthy opponent on the battlefield is, to a true warrior, the reason to rise each morning. The promise of one, particularly so beautifully and diametrically opposed, is the validation of his existence.

Perseverance is a self-targeted buff.

Decisive Strike is a self-targeted buff with an on-hit effect component.

Courage is a self-targeted buff.

Judgment is a point-blank area of effect.

Demacian Justice is a unit-targeted ability. 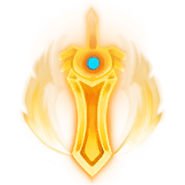 Retrieved from "https://leagueoflegends.fandom.com/wiki/Garen/Background/History?oldid=3112531"
Community content is available under CC-BY-SA unless otherwise noted.