Freljord, and likely some of

Freljord is the only region with access to mana generation and is all about spending it efficiently, usually favoring small numbers of powerful, synergistic, overwhelming units (sometimes literally with

Overwhelm, and/or with effects that benefit from it such as

Plunder) rather than an army of weaker units, and enduring the way to later in the game, with a focus on surviving damage, and reducing damage units take, with a large amount of Health bonuses, Deck buffs, and having some access to

Tough (Though more conditionally and rarer than

Demacia), means to reduce enemy units' Power (being the only region with access to

literally), and weathering down your opponent's board, while surviving the damage with your own units.

In the bitter cold of the frozen north known as the

Freljord, the wilderness is torn asunder from a savage, three-way civil war. Those who call this place home must find the fire within to persevere through harsh conditions and stand as paragons of fortitude and resilience. Can you weather the path to victory? 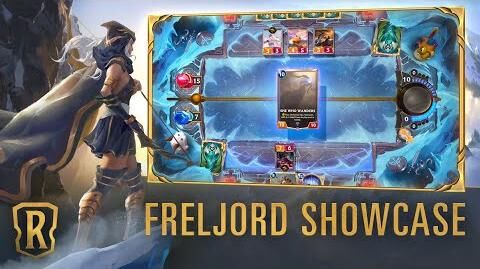 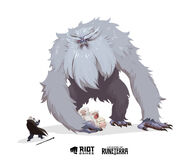