Force of Nature.
For the

Unique – Absorb: Taking magic damage from champions grants a stack of Steadfast for 7 seconds, stacking up to 6 times with the duration refreshing on subsequent magic damage from them and whenever dealing damage to them. Becoming

immobilized by an enemy champion grants 2 stacks and also refreshes the duration. Damaging basic attacks and spells per cast instance can only grant 1 stack of Steadfast every 1 second.
Unique – Dissipate: While at 6 stacks of Steadfast, gain 10% bonus movement speed and reduce all incoming magic damage by 25%.

Limited to 1 Force of Nature.

Force of Nature is a legendary item in 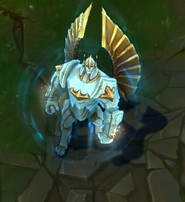