League of Legends Wiki
Register
Don't have an account?
Sign In
Advertisement
in: Lore of Shurima, Lore of Targon, Short Story,
and 2 more 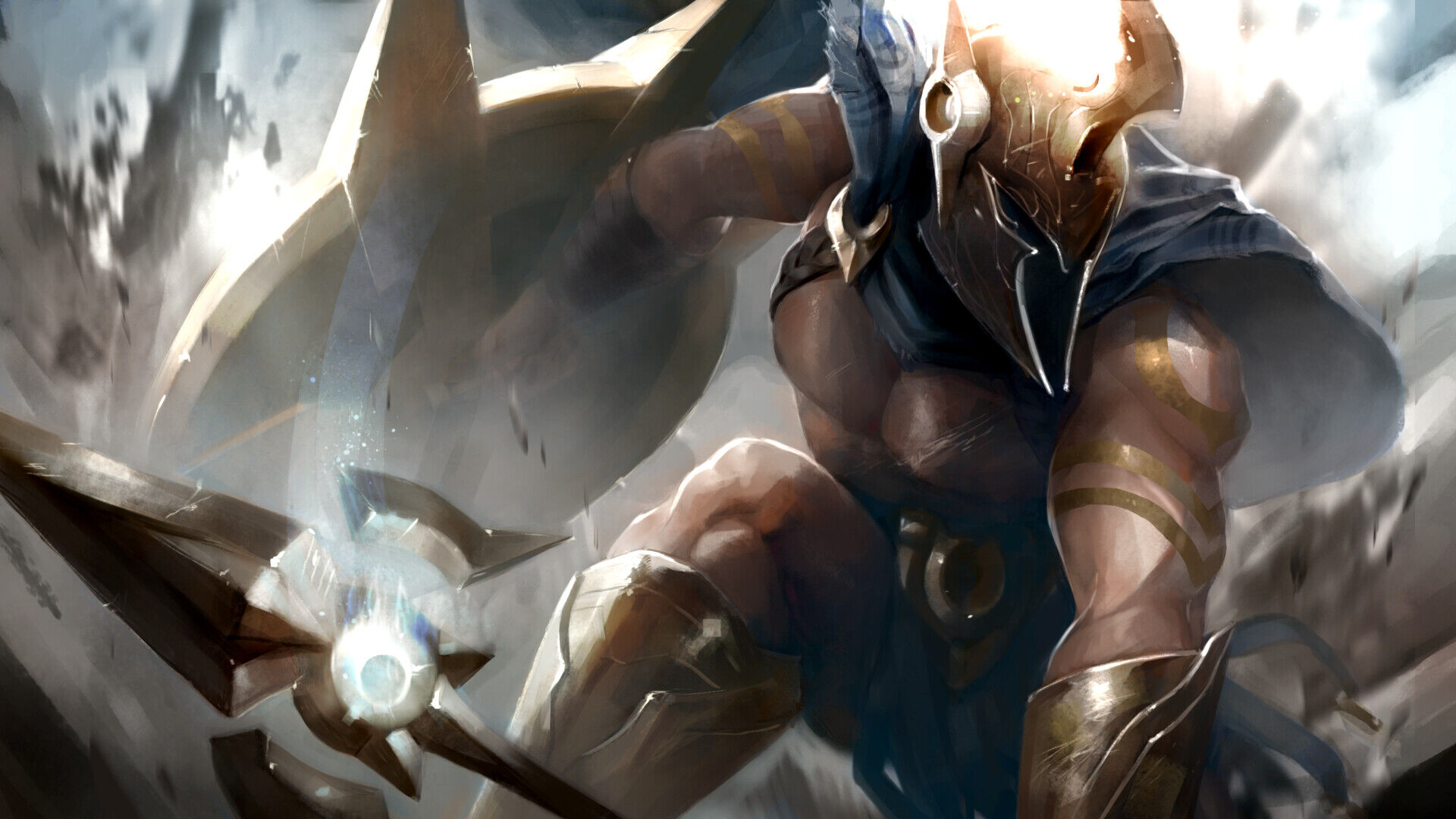 When I land in the ruins of Nerimazeth, it does not feel as if I have leapt, celestial magic burning my path across the sky, but as if I have fallen.

Around me on the swirling dunes, a cohort of Ra’Horak fights, Solari warriors far from the temples of Mount Targon. They have marched with fifty spears, three weeks into the desert—a distance I have crossed in moments—to investigate a power that grows, even as their own wanes. Here, the sun they worship is so constant, it is as if the shadows of the past are still burned into the desert, their outline all that remains of an empire long lost. Buildings, now covered in dunes. A sun, once meant to raise men into the heavens, now dulled and fallen to earth.

Shurima was born, and

died here. It was in Nerimazeth that the first Ascended were created. Meant to defend Shurima against any threat, those that outlived the empire were driven mad by long centuries of conflict, becoming Darkin and laying waste to the world before being contained.

But, as I well know, some abominations birthed by Shuriman hubris live on…

The sound of metal rings in my ear, as a spear whips past my helm. Then another, and another. The ringing rises up into a full battlecry, as the Ra’Horak unleash their might. Yet, as steel fills the sky, a blast of magic tears through the spears’ path, carving a swath of destruction through the ruins.

Once the dust clears, I see it. The reason I have come. A

creature looms, burning and broken like the empire it would rule. It is unlike any Ascended I have ever seen, a shattered god that has claimed this fallen city, and would see it rise again.

But once… it too was a man.

“The god-warrior!” one of the Ra’Horak cries. “We cannot defeat it!”

“Let me show you how a god dies!” I bellow in response, and I charge toward the creature, raising my spear. It is with their power that the spear glows—the power of the gods. The power of the stars. My muscles strain to bear the strange weight of the magic, as the creature unleashes another blast from within its shattered form. My spear is not burned away as the Ra’Horak’s were, but instead burns with its own light. It streaks like a comet at the Ascended, casting it to the earth, and its blast into the heavens.

Before me, only feet from the rent opened by the creature’s blast, a Ra’Horak cradles the body of a fallen warrior. Her own arm has been scorched by magic, where she sought to shield him from the attack.

“You… You are an Aspect,” she says, though in her eyes I can see the desperation. She is pleading, begging me to say yes, so that I can save her. So that I can save her friend. All around, the Ra’Horak lines are broken, along with their will to fight.

I do not answer as the spear is called back to my hand by the magic she so craves, its return an echo of my own thrust. The Ascended has left no blood upon its tip, only sand. It possesses no flesh other than magic and stone.

I want to tell her my name. That I am Atreus, that I too was once a Ra’Horak looking to the skies for the power to save me… But that man is dead. He died on Targon’s peak, along with his brother, Pylas. Slain by the Pantheon, and by his own failures. And no matter how hard I try, I can bring neither Atreus nor Pylas back. Even the god is gone, its constellation torn from the heavens.

Instead, I turn to face the creature once more.

“You must fight,” I tell the Ra’Horak simply. “You all must.” Around us, the ruined city burns, as the Ascended’s magic refuses to fade.

I run over sand fused into glass, each new blast of magic shaking the whole world, until it feels like the earth itself must fall apart. That only the heavens will remain. But I refuse to give up. I see ballistae, abandoned on the ground. The Ra’Horak raise their shields against debris cast from falling buildings, disappearing into dust.

“Fight! You must fight!” I yell louder, my voice carrying more of the gods’ authority than I would like, and then I am upon it, my spear slashing into the Ascended, cutting across the broken stone it boasts instead of a face. This close, its blasts crash into my shield, pushing me backward. I slash again, my spear trailing magic, and again, I raise my shield only just in time to deflect the Ascended’s wrath.

My feet dig into the dirt. I struggle to hold the beast at bay as the magic beats into me with the Ascended’s will, made only stronger by cruelty and rage. I push against it, snarling, and power lances off of the shield wildly in every direction—cutting through the ruins, the sky, and through the Ra’Horak still cowering beneath both. My hands begin to shake, and it is not to the warriors, but to myself, that I growl against lungs gasping for breath.

I spit blood into the dirt, and struggle to raise my head. But all I can see of Nerimazeth is that one Ra’Horak warrior, framed by smoke and chaos—as she looks back at me, into eyes only now revealed… and for the first time, sees something other than an Aspect. The man who cradled Pylas, as snow formed from his dying breath.

I wonder if she recognizes the stars, and my destiny, tattooed upon my chest. The scar that cuts through them. It is no longer pleading that shows in her eyes, as I see the light grow on her face, the creature gathering power for one more blast. Though her arm is ruined, and though her friend lies still, she picks up her shield and begins stumbling toward me, as inevitable and determined as death.

“What… is your name?!” I cough through ragged breaths, and still, the light grows brighter.

“Asose,” she says firmly as she stands beside me, and turns her shield to face the blast.

The ruins fill with impossible brightness that promises to burn everything away, until it does, and only darkness is left. There is no more power, no more Aspect. Where Asose once stood, there is nothing. Only my memory.

But still, I can feel my scar, throbbing with pain. Reminding me I am alive, and of every moment that brought me here. My brother-in-arms, Pylas, telling me to stop getting blood on his victory… The barbarian raid, each of us near death… Collapsing upon Targon’s pinnacle… The Darkin blade, cutting through death to awaken me again… Empyrean wheat, clinging to the mountain… The mud on my hands as I put down the plow, and pick up the spear…

It will not be in vain.

As I struggle to my feet, broken, I see the shadow of the Ra’Horak, emerging from cover, eclipsing the Sun Disc cradle behind me at the center of the ruins. I rise with them, not as a god, but as a man. My pantheon, all who have fallen, earning me another moment. All who have lived, and all who have died facing a moment of truth where they must decide why they fight. Who they love. What they truly are.

What are gods before this courage? They are nothing.

“Asose!” I yell into the ruins, though my ribs dig into my lungs.

“Asose!” the Ra’Horak call back. They too stand amidst the rubble, their shadow looming all the larger as the Ascended gathers its magic again.

And though I am broken, and though the god is dead, I feel the power ignite once more in my spear, as the plume on my helm bursts alight. It is calling me to battle, as the Ra’Horak cast their spears once more.

And, for a moment, a star lost with the Constellation of War gleams brighter than the sun.