Flutterbug is a young Voidborn that wants to take over the world -- and eat all the yummiest things in it. But, he's very small. He often has to hide under things in order to not get squashed. While he hides, he machinates on his complex plans. 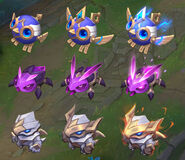