Runeterra Prime
Fleetfeathers are an avian predator of Demacia.

They are a close relative to the silverwing raptors, though share an eagle appearance with Azurites. There are way smaller size compared to their cousins. However, these birds still retain an aggressive predatory instinct, attacking horses and humans that get close to their surroundings.

Fleetfeather trackers are often used by the Demacian military to hunt down enemy scouts or fleeing bandits. 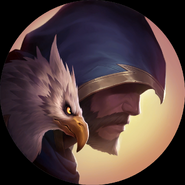