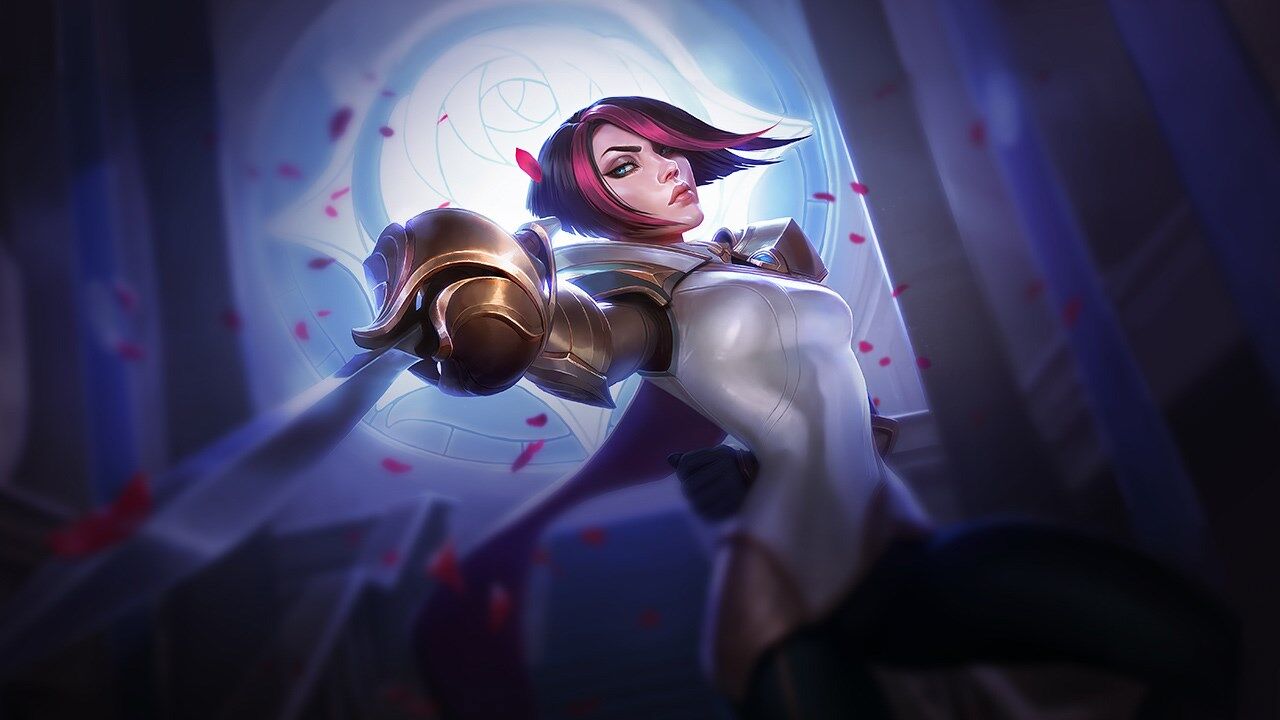 Fiora is a champion in League of Legends.[1]

Innate: Fiora identifies the Vitals of nearby

visible enemy champions, marked as an arc around them in North-, East-, South- or Westward direction. Vitals take 1.75 seconds to become targetable and linger for 13.25 seconds afterwards while Fiora remains near the target, otherwise the Vital will disappear. After a Vital ends, Fiora identifies a new one on her target.

dashes a short distance in the target direction and then stabs a nearby enemy. Lunge can hit structures and

Fiora can cast any of her abilities while

Lunge hits enemies regardless of whether Fiora has

unable to act but preventing the application of all non-

turret damage to her and gaining

Additionally, over the first 0.6 seconds of the duration, Fiora poises to strike, after which she sends a shock with her sword in a line in the target direction, dealing magic damage to all enemies hit until colliding with an enemy champion.

The enemy champion struck is also

crippled by 50% for 2 seconds. If Riposte negates at least one hostile

stuns the target for the same duration instead.

slows the target by 30% for 1 second but cannot

critically strike. The second attack will

modified critical damage (including to

Active: Fiora challenges the target enemy champion for 8 seconds, highlighting all four of their Vitals after a 0.5-second delay. While in effect,

Duelist's Dance does not identify new Vitals on Fiora's target.

While near the target, Fiora gains

If Fiora triggers at least one Vital before the target

dies, or triggers all four, she creates a

Victory Zone at their location for 2 − 5 (based on Vitals hit) seconds, which

heals Fiora and all allies within the area every second.

Duelist's Dance, the Vitals will continue to linger even if Fiora is not nearby. 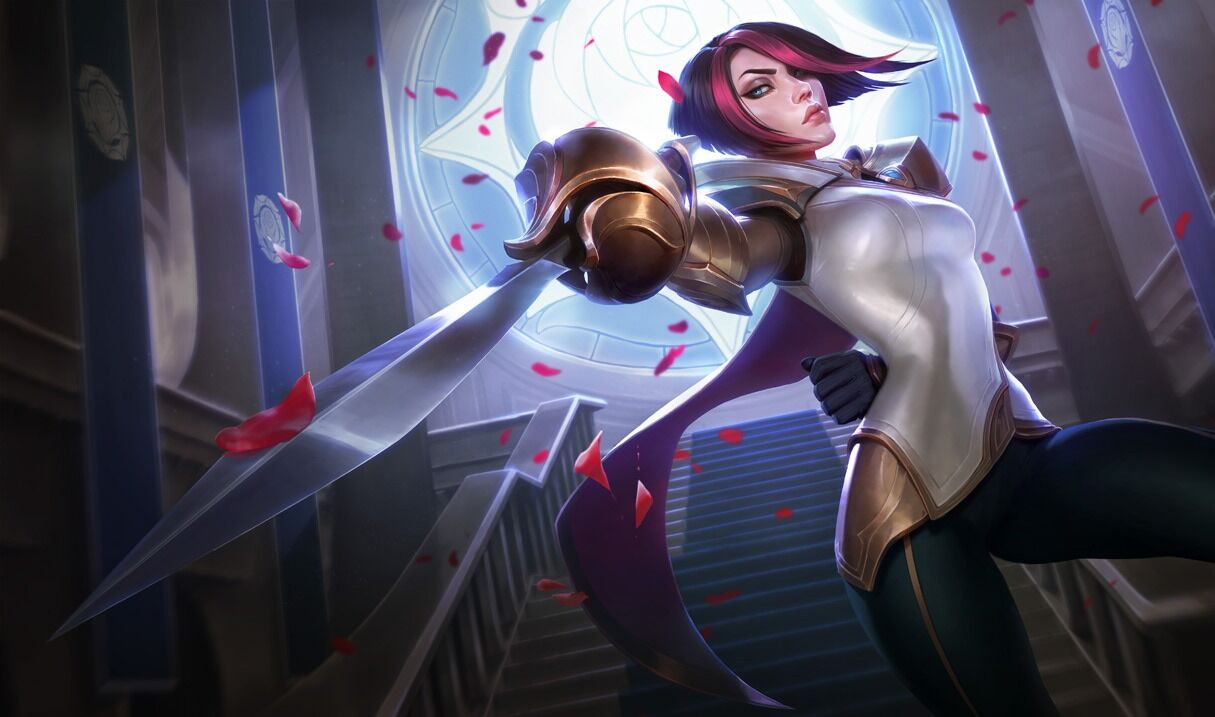 880
29.02.2012
The most feared duelist in all Valoran, Fiora is as renowned for her brusque manner and cunning mind as she is for the speed of her bluesteel rapier. Born to House Laurent in the kingdom of Demacia, Fiora took control of the family from her father in the wake of a scandal that nearly destroyed them. House Laurent's reputation was sundered, but Fiora bends her every effort to restore her family's honor and return them to their rightful place among the great and good of Demacia. 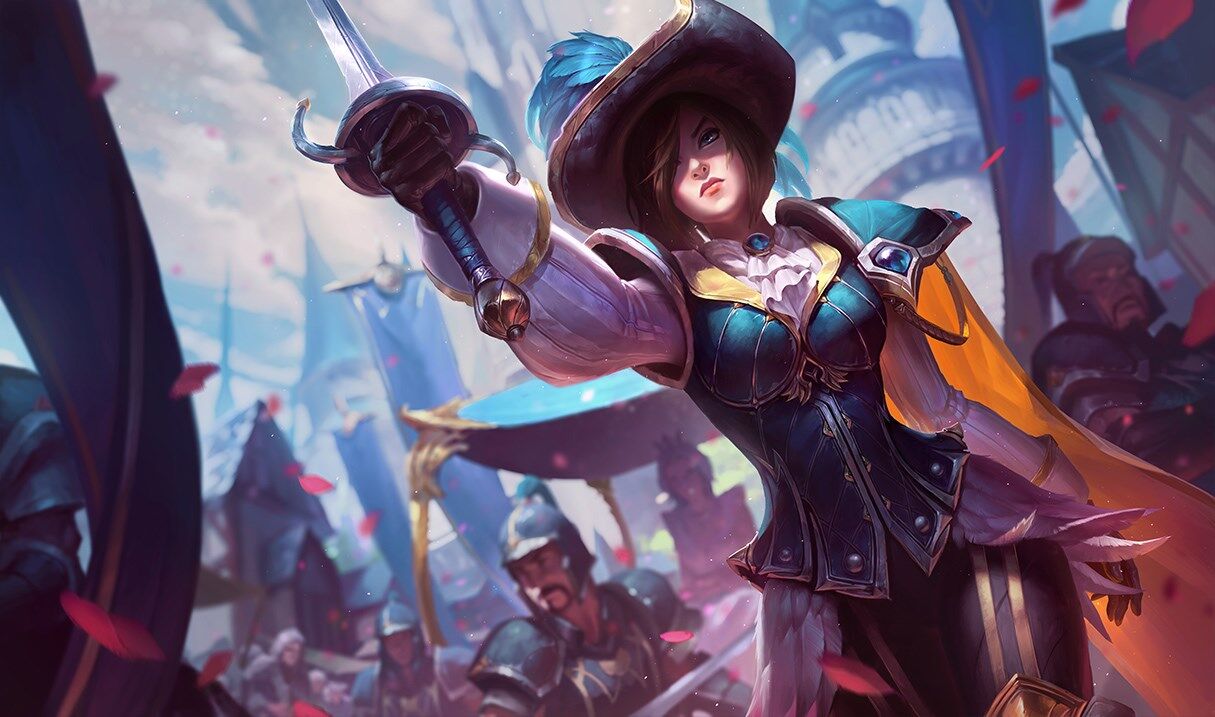 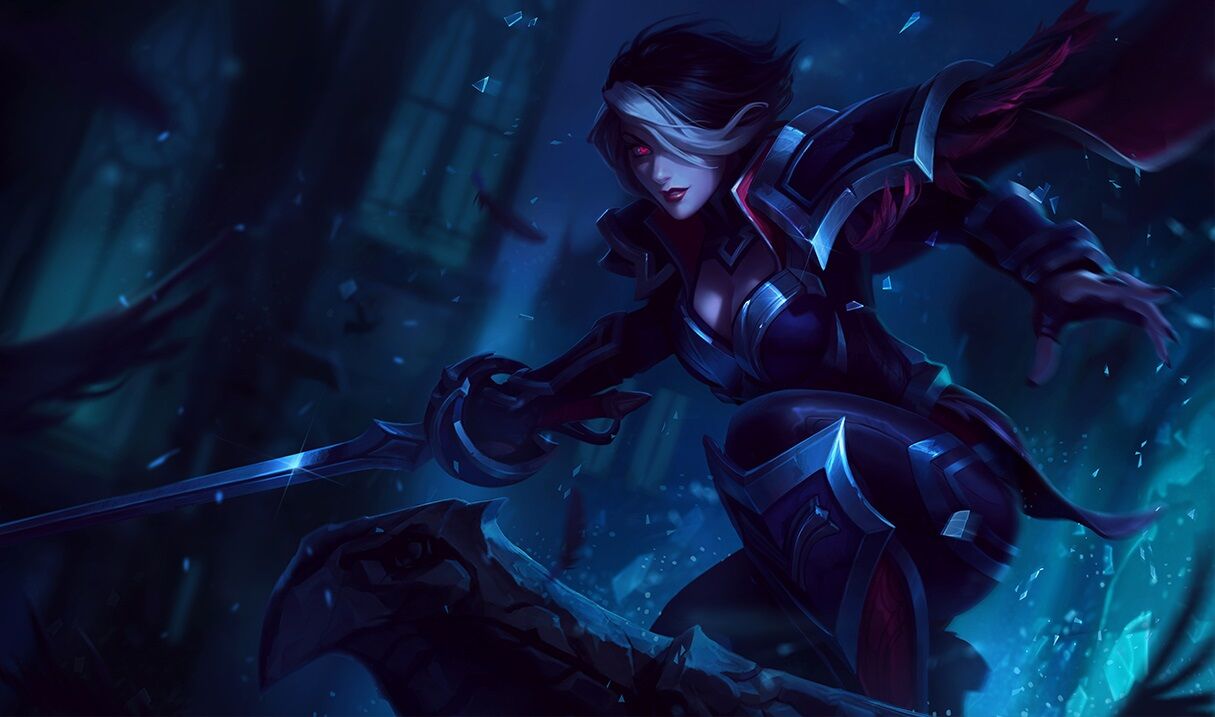 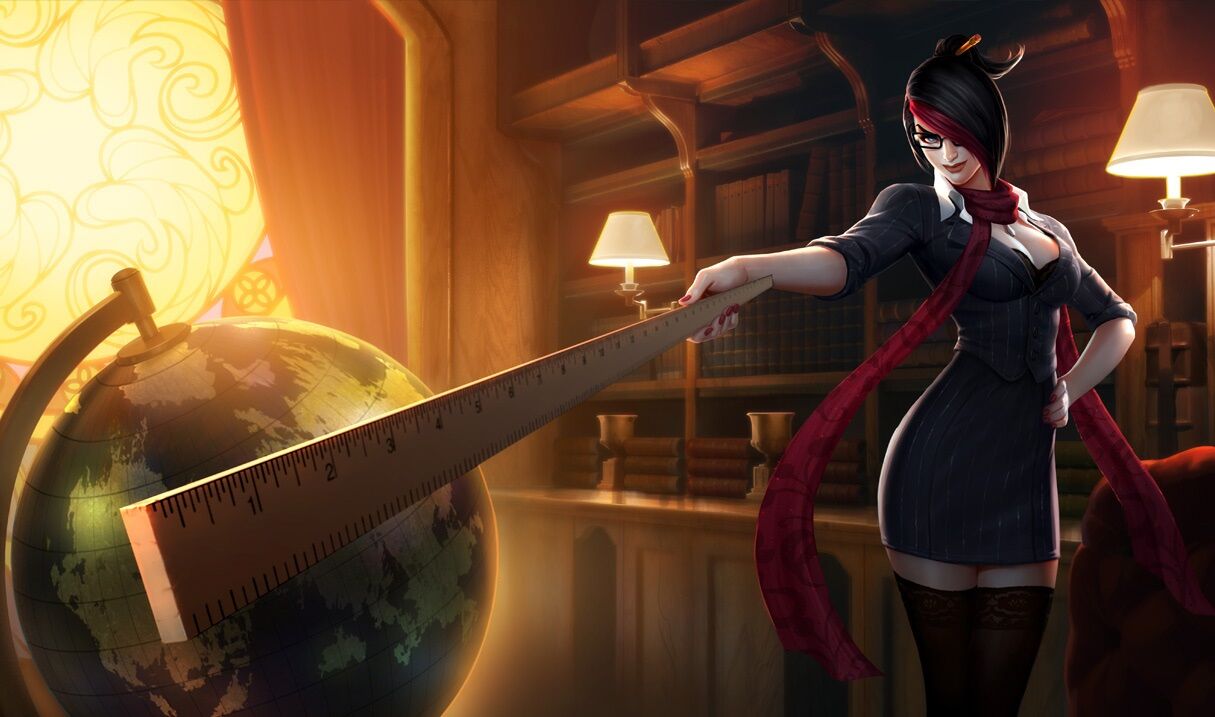 975
26.10.2012
ATTENTION ALL STUDENTS: Concerning the recent upswing in vandalism and general troublemaking, it has come to my attention these behaviors may be intended to draw the personal attention of our headmistress. The dean reminds students that such encounters can be fatal, and encourages them to re-read the Academy code of conduct. 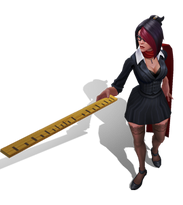 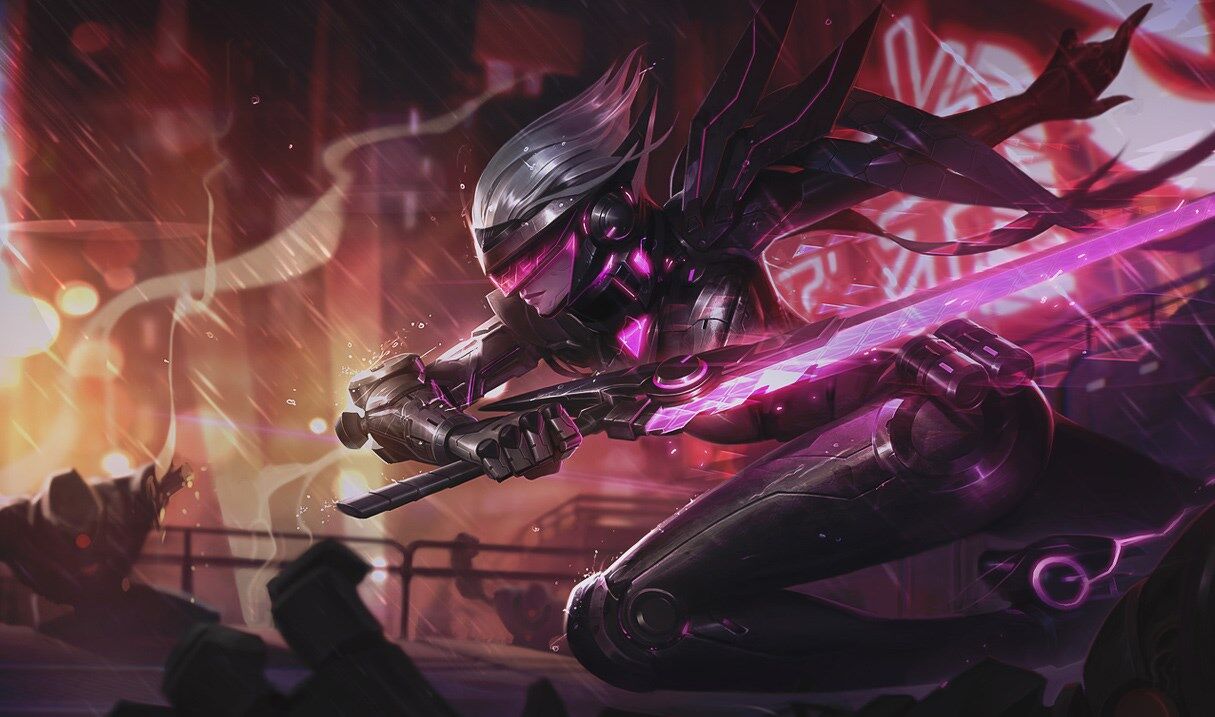 1350
07.09.2015
Augmented for speed, Fiora uses her zero-pulse sword to fight alongside Ashe and the other members of G/NETIC. The full-length energy blade allows for flawless attack precision and maximum repel strength, while the spatially controlled atomic tip coating is most suited for single-target combat. 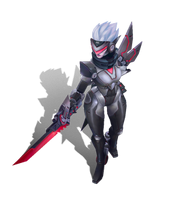 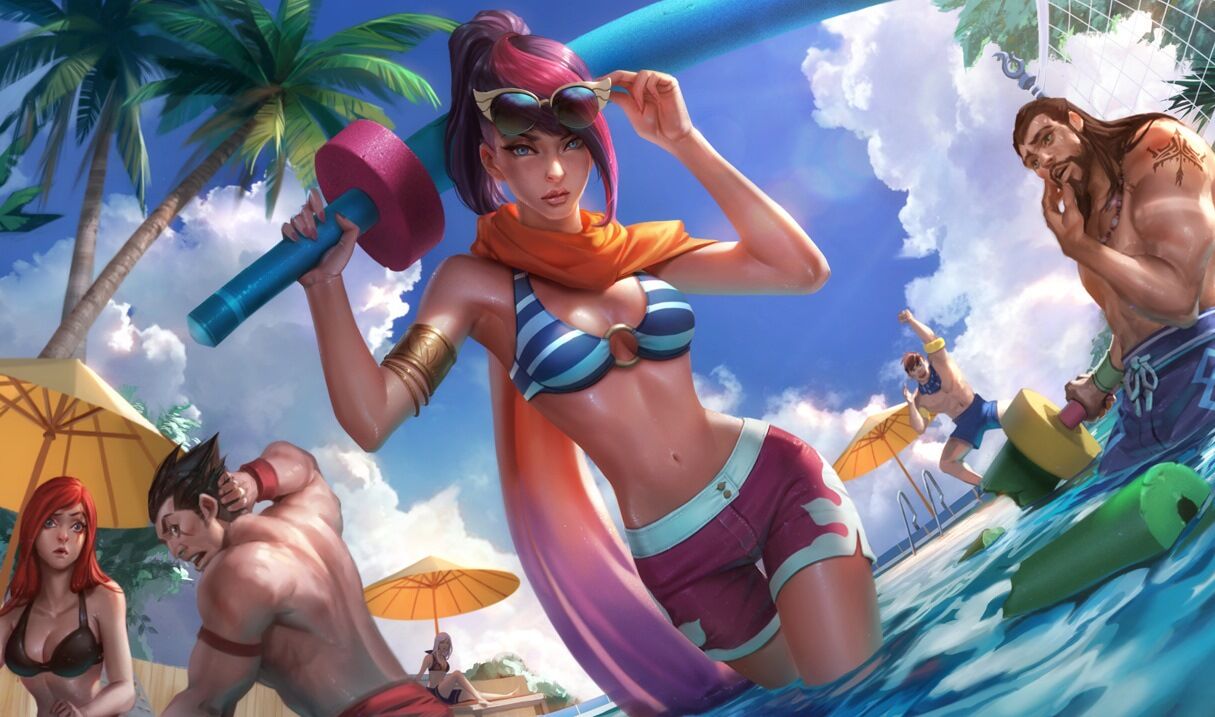 1350
13.07.2016
Fiora can stop a pool party dead in its tracks and she knows it. What she truly longs for is a worthy opponent—but alas, some people are just too good at crushing the party scene. 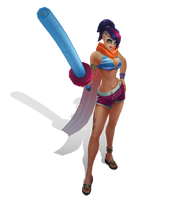 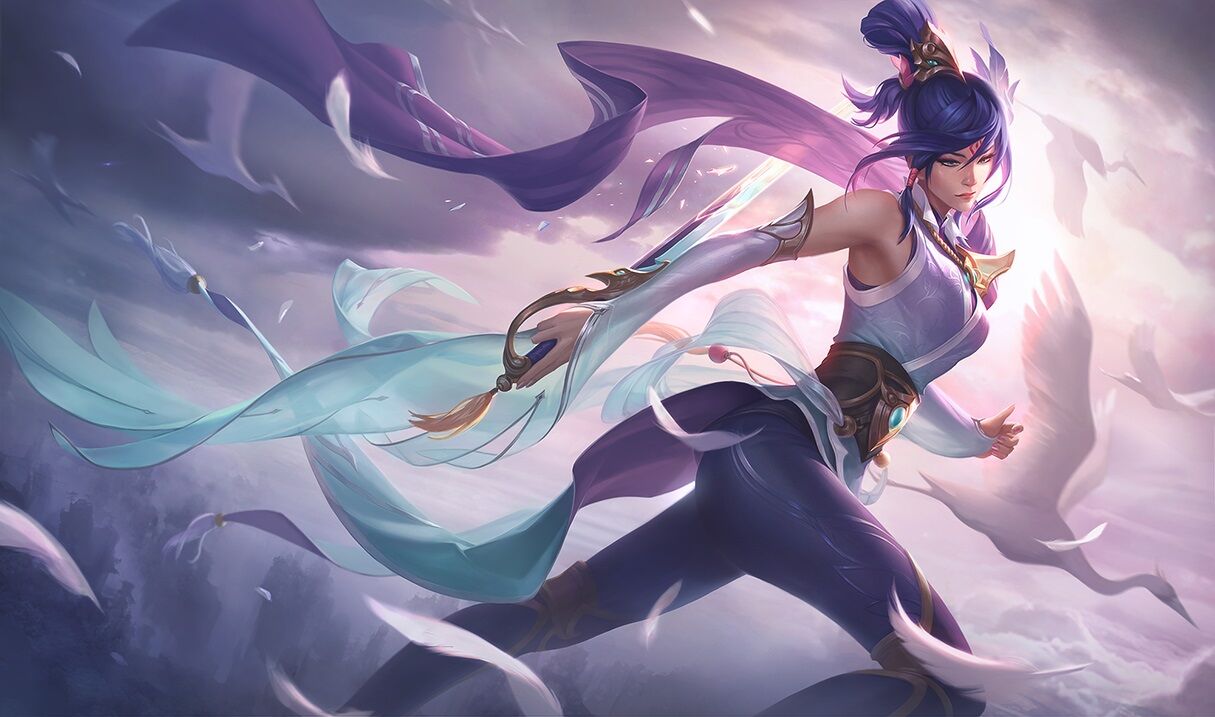 1350
27.09.2017
A pupil of a famous martial arts school, Fiora pined after her fellow student Yi, but was never able to win his heart. Now she pursues him as he searches for the fabled sword of jade, to protect the artifact from the man she once loved. 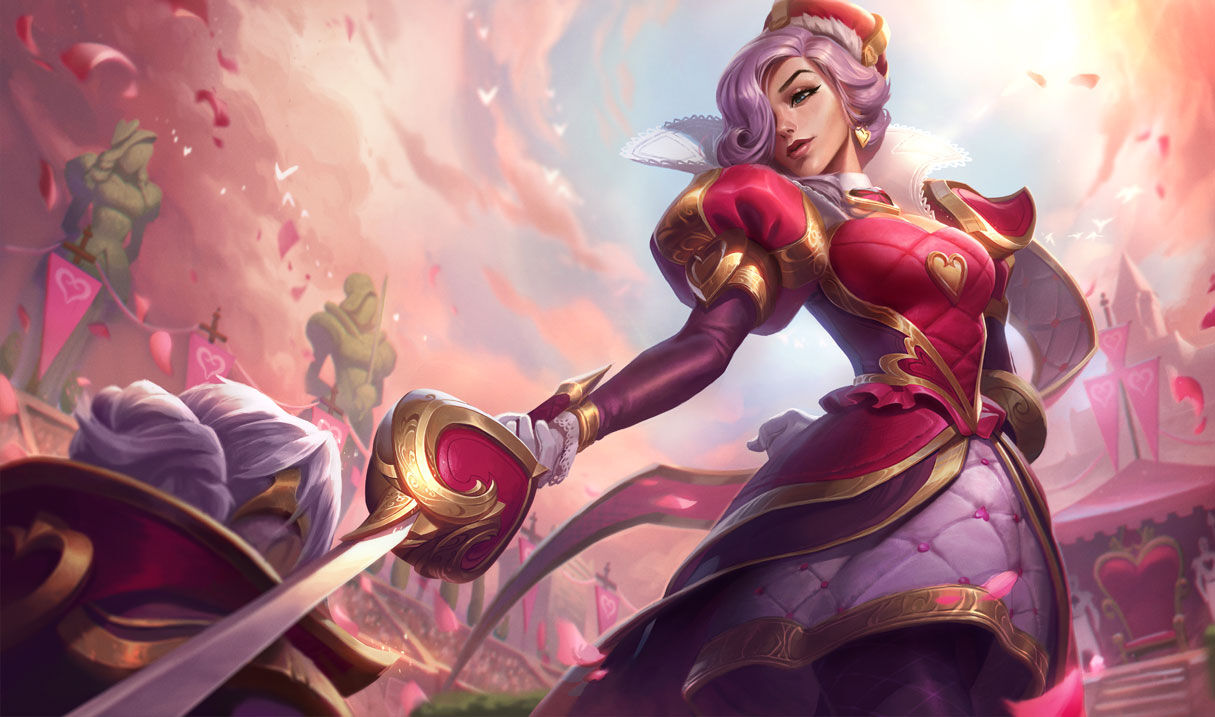 1350
11.02.2019
Fiora fancies herself the ultimate rival in all things romantic—a duelist unsurpassed in swordsmanship and love. How ironic that she finally seems to have met her match… 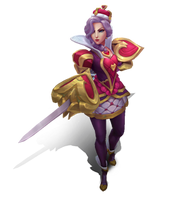 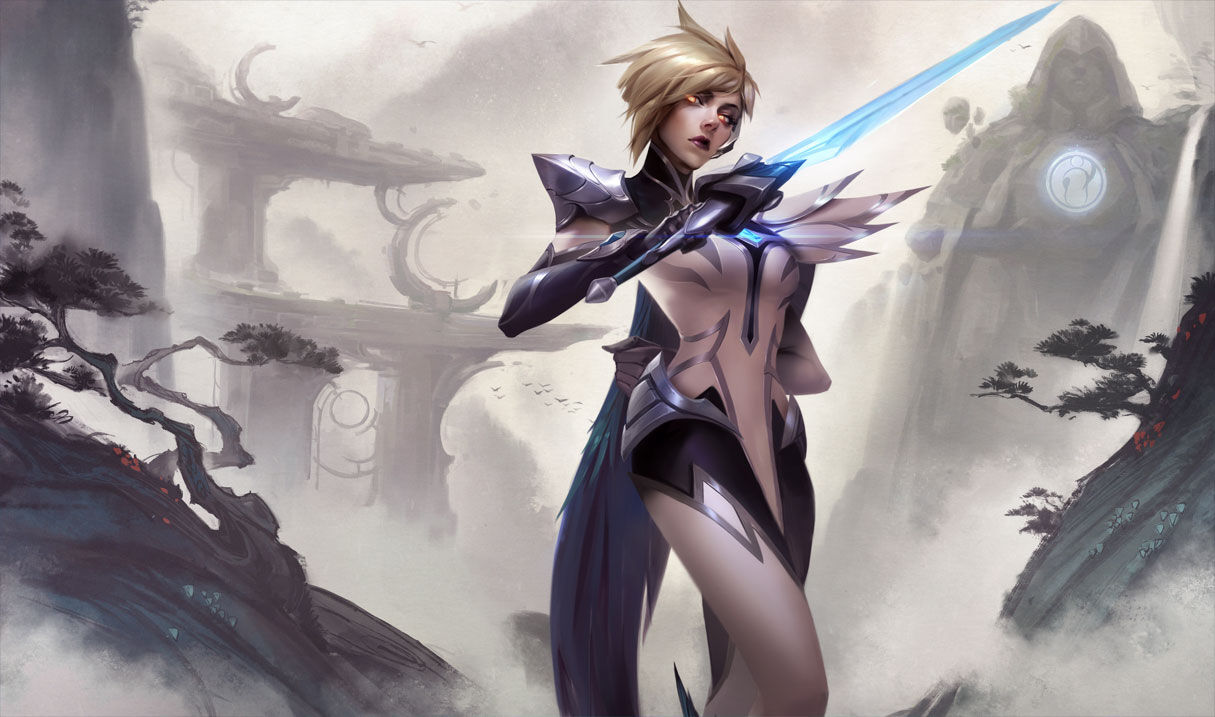 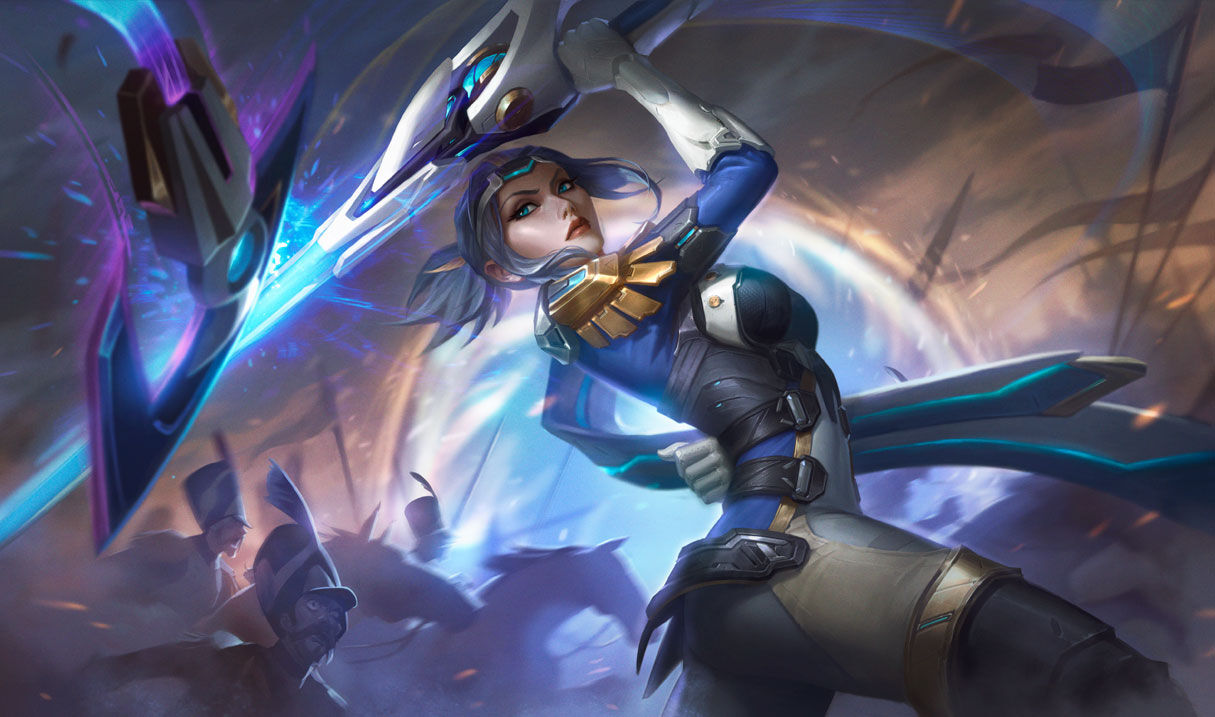 1350
14.05.2020
Fiora joined the Chrono-Enforcers at a young age under the tutelage of her father. When a conflict with a temporal fugitive left him disgraced, her future was thrown into doubt, but Fiora endured. Now, despite having reclaimed her family's reputation, and forged herself into an utter paragon of the Chrono-Enforcers, recent revelations have cast her into doubt once more, but this time about the Remembrancer's true purpose... 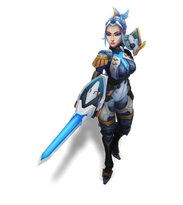 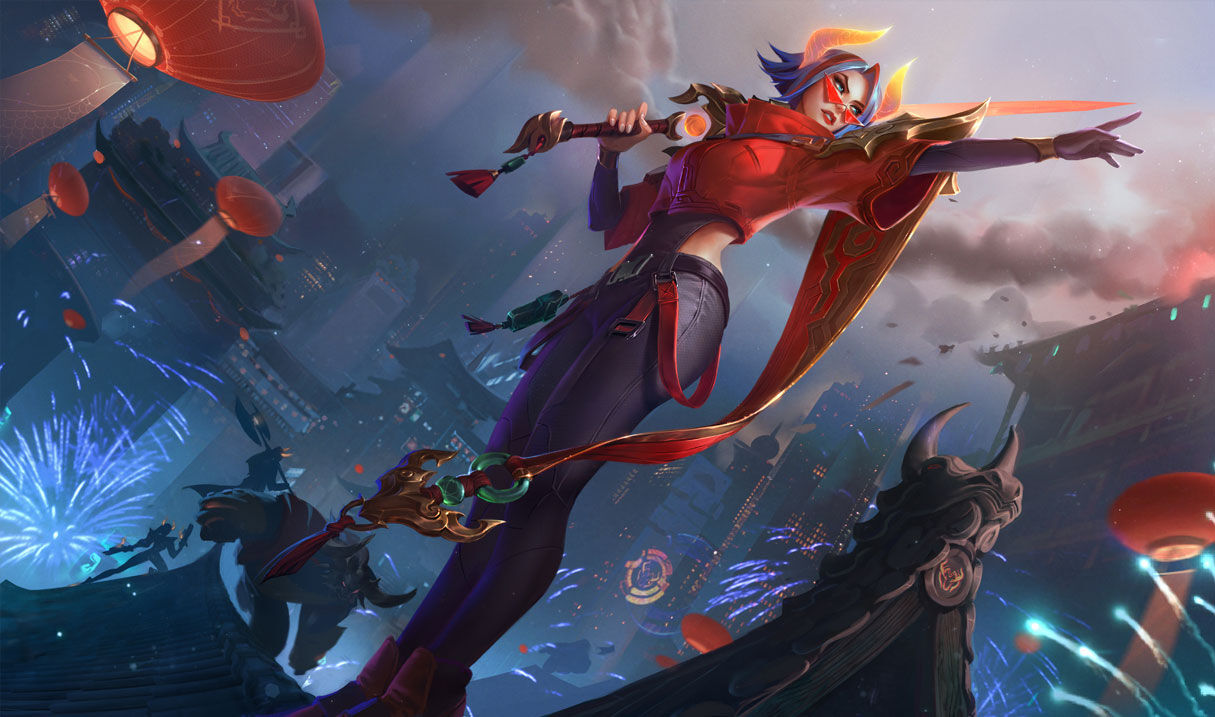 1350
04.02.2021
Fiora keeps mostly to herself, determined to reclaim her family's honor from her father's failure as a member of the last Ox Squad. She thinks the rest of the squad doesn't take their duties seriously enough, and her determination to avoid another disastrous New Year makes her seem standoffish and cold to her teammates. 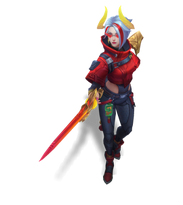 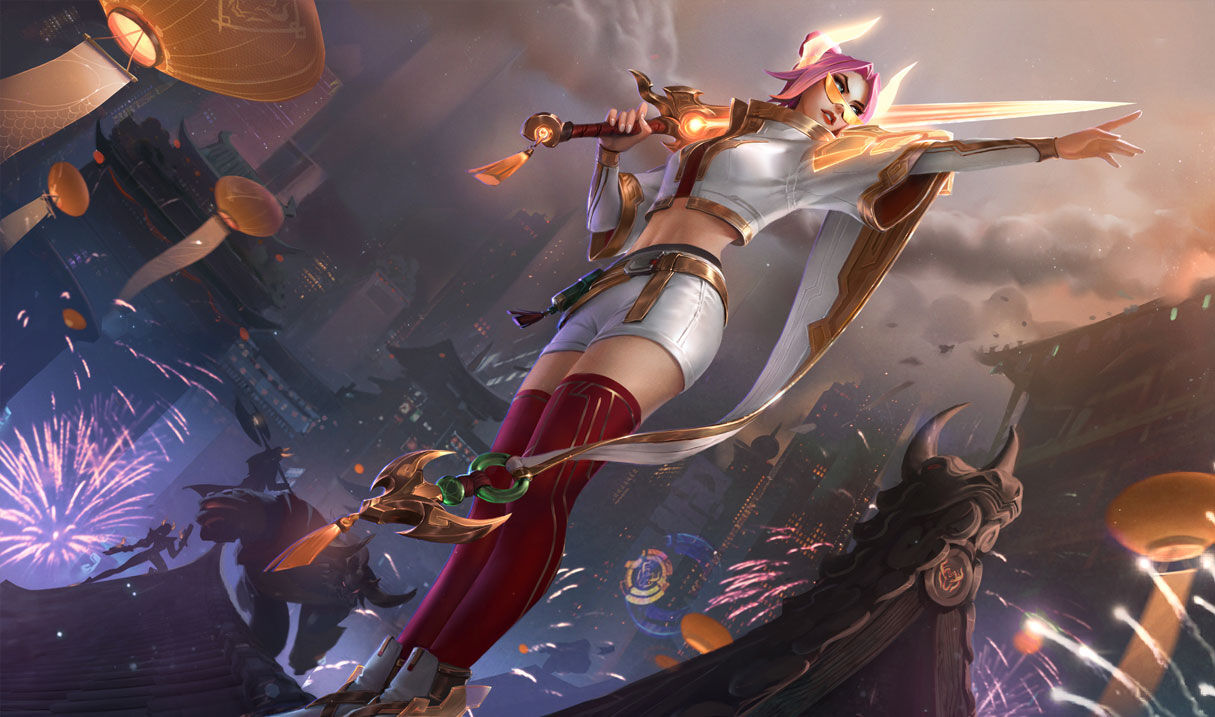 Prestige Lunar Beast
View in 3D
Special
04.02.2021
Long days of community service and long nights of tactical planning have left Fiora not drained but energized. Her steely determination has hardened into foresight and loyalty. Whatever the Lunar Beast throws at them, Ox Squad knows Fiora has their back. 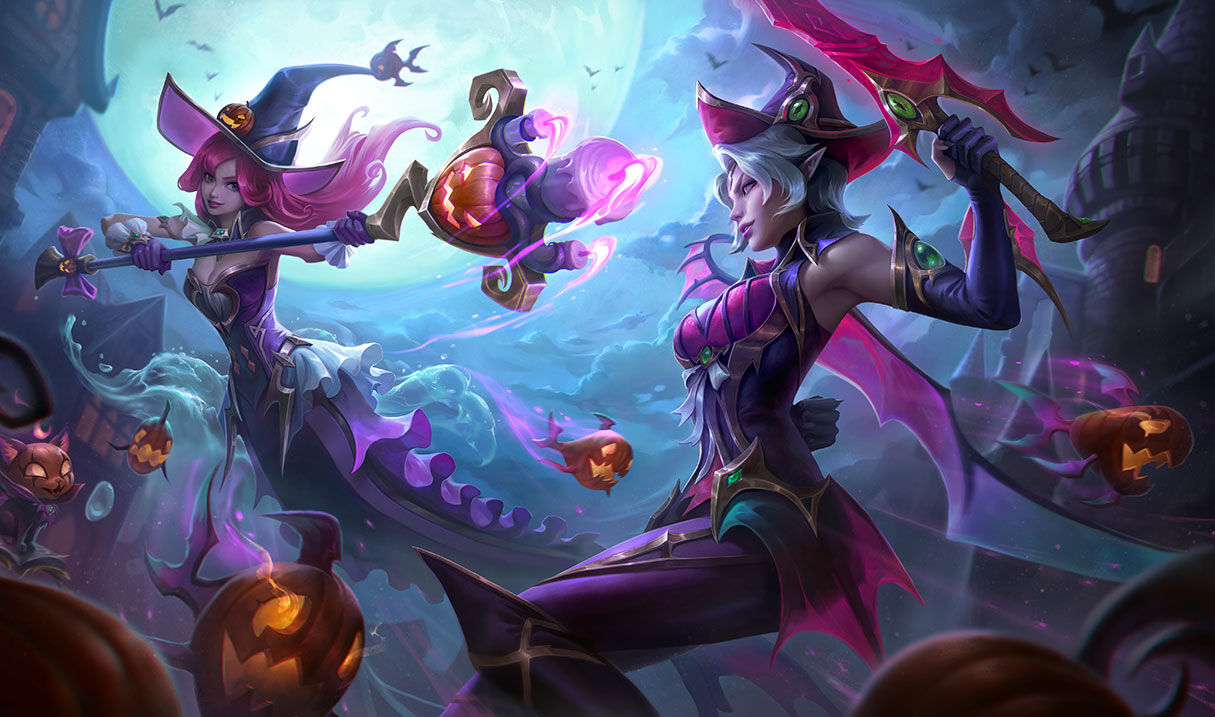 1350
07.10.2021
Fiora is tired of Nami crashing the party every year. She's determined that apple bobbing takes a back seat to tests of true skill—like seeing who can eat the most candy. 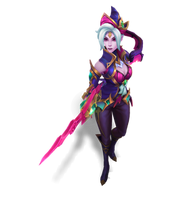