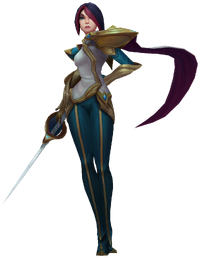 "I have come to kill you for the sake of honor. And though you possess none, still you die." -

The most feared duelist in all Valoran, Fiora is as renowned for her brusque manner and cunning mind as she is for the speed of her bluesteel

rapier. Born to House Laurent in the Kingdom of Demacia, Fiora took control of the family from her father in the wake of a scandal that nearly destroyed them. House Laurent's reputation was sundered, but Fiora bends her every effort to restore her family's honor and return them to their rightful place among the great and good of Demacia.

From an early age, Fiora defied every expectation placed upon her. Her mother had the finest craftsmen of Demacia fashion the most lifelike dolls for her. Fiora gave them to her maids and took up her brother's rapier, forcing him to give her lessons in secret. Her father obtained a host of dressmaking mannequins for her personal seamstress to craft wondrous dresses. Fiora used them to practice

At every stage in her life, Fiora has embodied all that is noble in Demacia, striving for perfection in all things and brooking no insult to her honor or that of her family's ideals. As the youngest daughter of House Laurent, she was destined for a life as a political pawn, to be married off in the grand game of alliances between patrician houses. This did not sit well with Fiora, whose temperament saw only dishonor in being maneuvered by another's will, even that of her beloved father. Despite her resistance, a politically advantageous marriage was arranged with an outlying branch of

Crownguard, and plans were set for a summer wedding.

The ancient families of Demacia sent their invited representatives to House Laurent to attend the marriage ceremony, but instead of meekly accepting her fate, Fiora defied it. She declared before the assembled host that she would sooner die than be dishonored by allowing someone else to control her fate. Her husband-to-be was publicly shamed and his family demanded a duel to the death to wipe away Fiora's scandalous insult.

Fiora immediately stepped forward, but as Master of House Laurent, it was her father's duty to accept. The champion of House Crownguard was a truly deadly warrior, and defeat was almost certain. To lose would see House Laurent ruined and his daughter exiled in disgrace. Presented with so stark a choice, Fiora's father made a decision that would damn his family for years to come. That night, he attempted to drug his opponent with a draught to rob his blows of speed, but his attempt was discovered and the Master of House Laurent was arrested.

Demacian law is notoriously harsh and unforgiving. Its justice allows no leeway, and Fiora's father had broken its most fundamental code of honor. He would suffer public humiliation upon the executioner's scaffold, hanged like a common criminal, and his entire family expelled from Demacia. On the eve of his death, Fiora visited her father's cell, but what passed between them is a secret known only to her.

An ancient and all but forgotten code of honor allowed for a family member to expunge the shame of one of its number in blood, and thus avoid the virtual death-sentence of exile. Knowing they had no choice, father and daughter faced each other within the Hall of Blades. Justice would not be served by a mere slaying, Fiora's father had to fight and be fought. The battle was blindingly swift, a

dance of blades so exquisite that those who witnessed it would never forget what they had seen. Fiora's father was a fine swordsman in his own right, but he was no match for his daughter. They said farewell in every clash of the blade, but in the end a tearful Fiora

buried her rapier in her father's heart and assured her family's continued place in Demacia. With her father dead at her feet, Fiora became the head of House Laurent (much to the surprise of her older brothers... )

Though the honor of House Laurent was not entirely ruined, scandals are not easily erased. In the years that followed, Fiora proved a sagacious leader of her House and swiftly learned not to make the mistakes of brash youth. She became a formidable mistress of blade and negotiation, cutting to the heart of any matter with her customary clarity and seemingly cruel directness. Some still speak of her House's disgrace or decry how standards have fallen that a woman should dare call herself ruler of a noble House, but only in private. For when such gossip reaches Fiora's ear, she is quick to call out those rumormongers and

demand justice on the edge of a sword. Yet even here, she is not without pragmatic cunning, offering each challenger a way out that will allow honor to be satisfied without death. So far, none have accepted her offers, and none have ever walked away from a duel with Fiora.

With the fortunes of House Laurent on the rise, Fiora has no shortage of suitors, but none have yet proven worthy of her hand. Many suspect Fiora herself puts every suitor through an impossible gauntlet of courtship in order to remain aloof and unmarried, for a wife would, traditionally, relinquish power to her husband.

And Fiora has never done anything traditionally.

"I came here seeking a challenge - is this the best these fools can offer me?" -

Fiora, Demacia's most notorious duelist, earned her fame with her sharp blade and sharper tongue. She boasts the refinement of an aristocratic upbringing, and a fierce devotion to the perfection of her craft. Having surpassed her peers at home, Fiora now seeks greater foes. She will settle for nothing less than the world's acknowledgement of her mastery.

As the youngest child of House Laurent, a family known for its long line of elite duelists, Fiora considered herself destined for greatness. She longed to match the skill of her father, a legendary swordsman, and her talent quickly surpassed that of her siblings. Fiora's peers perceived her confidence as arrogance, but she dismissed them, striving even harder to become a worthy successor to her father.

Her devotion turned out to be misplaced. On the eve of an arranged duel, authorities caught Fiora's father slipping a paralysis poison into his opponent's drink. His treachery destroyed the family's reputation, and Fiora's own honor fell under question. Outraged and desperate to clear her name, she challenged her father to a duel.

Though he fought with power and style, Fiora realized the man had long forgotten the discipline that defined a true duelist. She disarmed him, and with her blade to his chest, she demanded control of House Laurent. Her father surrendered, but even in victory, Fiora knew the shadow of doubt still tainted her reputation.

Intent to seize her destiny, Fiora vows to surpass her father's false legacy and prove that she is not only the greatest duelist in Demacia – but all of Valoran.

Fiora's ego would be insufferable if it wasn't so... justified." -

As the youngest child of the noble House Laurent, Fiora always considered herself destined for greatness. The Laurents had dominated the dueling culture of Demacia's aristocracy for centuries, and Fiora's father was regarded as one of the finest swordsmen the nation had ever seen. Inspired by his tales of glory, Fiora began training as soon as she could wield a blade and quickly showed greater talent than any of her siblings.

As she grew older, her self-confidence and rigid discipline only widened the gulf of expertise between Fiora and her peers. Her fellow duelists perceived her confidence as arrogance, but none could defeat her in combat, and each new victory only heightened her lofty self-esteem. Even so, Fiora never allowed herself to become complacent in her training, and she drove herself ever harder to become a worthy successor to her father's legacy.

Her devotion turned out to be misplaced. On the eve of an arranged duel, Fiora's father was caught slipping a slow paralysis poison into his opponent's drink. Following the incident, many of his past opponents came forward with their own accusations: envenomed weapons, bribery, blackmail, and more. In an instant, he had destroyed his family's honorable reputation.

Fiora was outraged. Not only had her hero betrayed her ideals, but also Demacia's dueling elite now doubted her own ability. She desperately wanted to wipe the stain from her family's history but, even more, she wanted the world to acknowledge her mastery.

She found her solution in the one arena where she could fight the world's strongest warriors without being accused of dishonesty: the League of Legends.

Duelist is a self-targeted buff.

Lunge is a single-targeted dash.

Burst of Speed is a self-targeted buff with an on-hit effect component.

Retrieved from "https://leagueoflegends.fandom.com/wiki/Fiora/History?oldid=3043044"
Community content is available under CC-BY-SA unless otherwise noted.