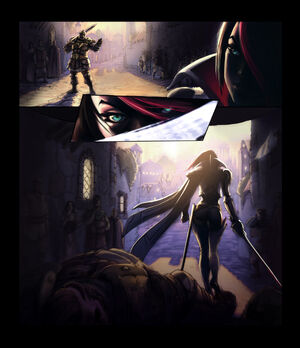 Wherever your travels might take you here in Valoran, it's important to learn a little bit about the local color. Take Demacia, for instance. While it might be picturesque, you might find it useful to learn they're famous for their dueling culture before you pencil any indignant remarks or uncouth villainy onto your vacation itinerary.

Fiora, the Grand Duelist, has even made quite the name for herself by dealing with any scamp, scoundrel, miscreant, rogue, scalawag or rapscallion she runs across according to this time-honored Demacian tradition. If you happen to run into each other, it's probably best you keep your temper level if you don't want to find yourself staring down her

It's been quite a while since we've had the opportunity to explore the design space of a true melee carry in League of Legends.

Fiora, the Grand Duelist, is our first all-out take on this type of champion since our initial launch, and our new addition to this role has let us really focus on a particular aspect: speed.

Not content to leave melee to the guys with oversized weapons, Fiora makes up for it in raw

grace to shred opponents apart and

keep herself in the fight. One way she utilizes this is by

parrying her enemy's attacks if she times it right. Parrying returns damage in the same swipe, making enemies think twice before directing attacks at her.

A melee carry must consider how to engage a fight, such as when to attack and how to stay on important targets with stuns, slows and snares flying around the battlefield. Fiora doesn't deal with these by being immune to crowd control, or being too stubborn to lose that last bit of health - that would be uncouth. Instead, her

Blade Waltz moves her from target to target at light speed, making her so fast that no spell or weapon can lay a hand on her during its duration. Popping Blade Waltz early will give Fiora some additional up-front burst, but will leave her vulnerable to burst damage and counterattacks. This 'de-aggro' timing is an important choice that can result in either a swift death or a Pentakill.

While all carries have a boost to help their auto attacks get the job done,

Burst of Speed has a high effect, very short duration, and a moderate cooldown. To compensate this higher opportunity cost, it refreshes when Fiora runs an enemy through. This not only makes Fiora players consider their timing as when to use this powerful buff, but her enemies can also deny her the opportunity by saving their escapes and disables for when this is up, suppressing her massive damage increase.

Being a melee carry is no longer a boy's club - Fiora adds grace, class and a rapier wit to the group. While she may not be as large or overbearing as her contemporaries, underestimating her is an often fatal mistake.

Fiora regenerates health over 6 seconds each time she deals damage. Striking champions will cause this effect to stack up to 4 times.

Fiora dashes forward to strike her target, dealing physical damage. Fiora can perform the dash a second time within a couple seconds at no mana cost.

Fiora's Attack Damage is increased. When activated, Fiora parries the next basic attack and reflects magic damage back to the attacker. Works against champions, monsters, and large minions.

Lunge she lands during this time increases her Movement Speed. Killing a champion refreshes the cooldown on Burst of Speed. 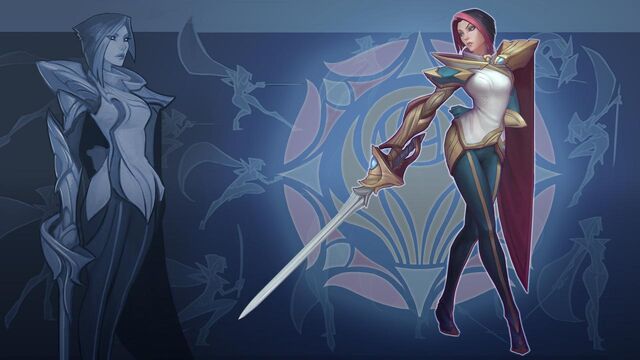 Compared to a few of our

Fiora pretty darn recently. Still, she's one of them tricksy melee marksmen/fighter types who was supposed to be a fleet-footed fencing duelist, but who, once she had a few items, could just

Lunge up to the other team's squishies and

smack 'em for a quick and easy - and unstoppable - kill. That was her single gear, really, and because Fiora was only good at killing, when she didn't have the damage to do her single job, she couldn't do much of anything.

Changes were needed, so we added in non-damaging tools to help Fiora and her team, then balanced that out by reducing some of the undodgeable killing power in her kit. She's still all about outplaying her opponents, but now has the tools she needs to play from behind or help her team out in ways that don't involve straight up slaughter. Voila, or whatever. Here's her new kit:

Fiora identifies the weak spots - or vitals - in the defenses of all enemy champions she comes close to. If she manages to attack her enemy's weak spot, Fiora deals extra true damage for that attack while gaining a small heal and short boost of speed. Fiora reveals a new weak spot whenever she attacks one, or when a moderate period of time passes without it being attacked.

Fiora lunges in a target direction before striking a nearby enemy, dealing damage and applying on-hit effects. Lunge prioritizes enemy champions, and tries to hit enemy

weak spots. Finally, some of Lunge's cooldown is refreshed when the ability strikes an enemy.

Fiora enters a defensive stance, parrying all damage and hard crowd control abilities for a fraction of a second. After she's done parrying, Fiora attacks in a target direction, damaging and briefly

slowing the first enemy champion she strikes. If she parries any hard crowd control abilities, Riposte

slows her target, while the second is guaranteed to

Fiora targets an enemy champion, gaining speed and full knowledge of their

vitals. Each time she destroys a

weak spot, she deals percent max health true damage. If she's able to destroy all four weak spots, or if she destroys at least one before her target dies, Fiora creates a large and long-lasting zone under her enemy that heals Fiora and her allied champions.

With the update, Fiora's trading raw damage for extra survivability and utility, making her more of a skirmishing duelist and less of an assassin. We switched her passive entirely, bringing her a new 'attack the

weak spot' minigame that requires smart planning, position, and execution. But hitting an enemy where they don't want to be hit is hard, so we gave

Lunge the free aiming Fiora needs to dart around without just getting to her enemy. Now she can lunge through targets (or to the side of one) all so she can then attack the enemy's

weak spot, deal a chunk of extra damage, and retreat safely with her small speed boost. 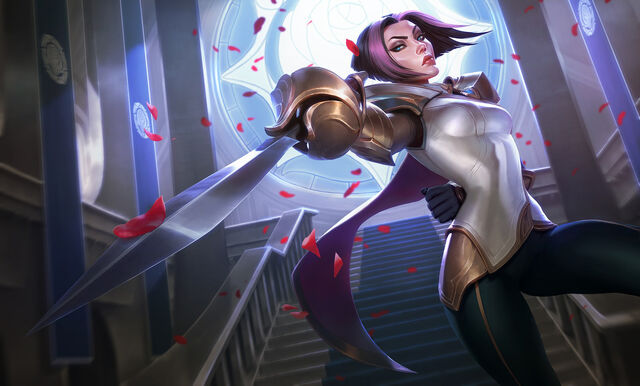 Next up is her W. The old

Riposte was exceptionally binary - if your opponent has a basic attack, hit W, if not, don't - and featured a ton of invisible passively gained pain. New Fiora loses the passive entirely, and gains a whole load of extra defensive options. Even though it doesn't last long,

Riposte negates all incoming damage, meaning Fiora players with catlike reflexes can nullify huge amounts of burst from approaching assassins, or executes from other fighters like

Riposte's attack makes for a smart follow up, giving Fiora the chance to close range and attack more

E, but again helps the Grand Duelist maneuver into positions where she can attack her enemy's

Last but not least, let's talk about her ultimate!

Blade Waltz was a hugely impactful ability that dealt a crap load of damage, and while it showcased Fiora's fantasy of a nimble-footed sword-wielding killer, all you had to do to pull the move off was headbutt your R key. In other words, the mechanics didn't match the fantasy of a skill-based and nimble duelist.

Grand Challenge is obviously totally different, and is designed to give Fiora players - and her target - this genuine sense of a real time duel, with Fiora moving around looking to destroy the four

weak spots, and her opponent looking to defend them. The rewards, if she pulls them off, are impressive. Aside from the increasing amounts of true damage she deals, the heal will often give Fiora and her team the sustain they need to overpower their enemies and win the fight.

The tl;dr of the changes is that we wanted to better execute on the fantasy of a duelist, someone who wins through smarts and mechanical ability rather than brute numbers. Old Fiora had some aspects of that, but ultimately her best play pattern involved double

lunging until she was face-to-face with a horrified enemy squishy, then hitting the

Burst of Speed both had some elements of dueling that we liked, but again... we just wanted to do it better. That's why we've echoed - rather than replaced - most of her old abilities with her new moves.

Tales of Runeterra Demacia “Before Glory”

Time To Duel (Legends of Runeterra)

Retrieved from "https://leagueoflegends.fandom.com/wiki/Fiora/Development?oldid=3063675"
Community content is available under CC-BY-SA unless otherwise noted.