Ionian chem-baron and the boss of the

Although not much is known about Finn's early life, it is heavily implied that he started his criminal career as a teenager, given that he already saw

Vander as a threat at the time. After

Silco killed Vander, Finn came to believe that the former was the perfect man to run

Zaun and was more than happy to work for him.

At some point after Silco took control of the undercity, Finn made a name for himself as the boss of the Slickjaws, an illicit enterprise that specializes in assassinations, and became affiliated with several other crime lords who were also loyal to Silco, creating the first generation of chem-barons.[1]

After the actions of

Jayce to shut down the border between Zaun and

Piltover, trade between the two cities came to a sudden halt, causing Finn to lose massive profits. Frustrated by the fact that Silco was doing nothing to keep Jinx under control, Finn started to lose faith in the man's leadership and even attempted to convince the other chem-barons to join him in a coup against Silco. However, before they could give him an answer, Silco arrived on the scene and unleashed a toxic gas in the air to remind them of the oppressive life that he had saved them from.[1]

Although this move convinced the other chem-barons to fall back in line, Finn was not swayed and his disdain towards Silco only increased, eventually leading him to arrive at the Last Drop and have a talk with

Sevika, offering her a deal if she agreed to turn on Silco.[2]

After Jayce led a raid on one of

Renni's factories and accidentally killed her son in the process, Finn secretly allied himself with Renni and finally attempted to overthrow Silco with her support. However, his coup attempt failed due to Sevika, who tricked him into thinking she was on his side and slit his throat with her sword, killing him on the spot.[3] 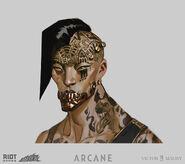