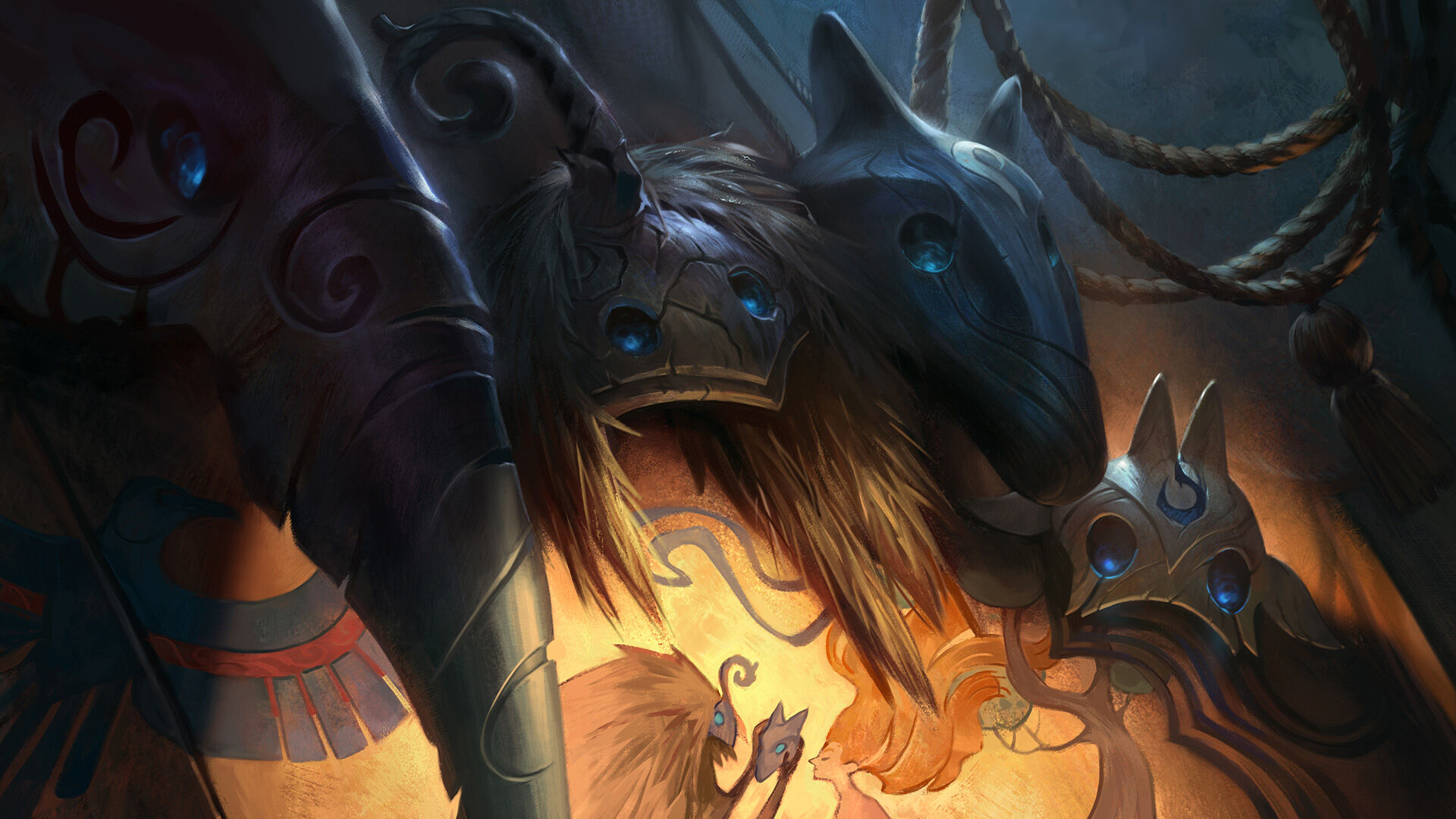 Tarnold knew the performance was doomed when all his playwright’s tricks were exhausted.

Tarnold knew the performance was doomed when all his playwright’s tricks were exhausted. His players were lost to performance jitters. Perhaps the text was to blame, or the superstitions surrounding the performance of a dead scribe’s unfinished work, but each mummer had succumbed to one form of unprofessionalism or another. Artlo, who played a character known only as the Philosopher, wouldn’t stop dying. Each time he pantomimed his last breath in the company of that kindred pair of macabre spirits known as the Lamb Lamb and the

2 maskmaker... Alas, no one wishes to hear that story.” “We agreed for no visitors during rehearsals!” Tarnold said to his performers. “She’s been here all night,” Nenni said. “We thought she was with you.” Had she? It was possible. Tarnold had battled insomnia for weeks. His attention snapped to the woman in the golden seats, which were reserved for the Lady Erhyn herself. Two summers ago, King Jarvan II’s

7 little heir had sat upon those velvet cushions to enjoy Tarnold’s rendition of The King of All Fishes. The boy had clapped loudest as the final curtain fell. “Who are you?” Tarnold said. “Step into the light.” The woman came forward, but the light illuminated little of her mystery. Her eyes were distant stars shining through mist. She wore a ghostly half-mask with a curious twirl of a twig sprouting off the top. Upon that sprig was a single dark leaf. Her elegant gait sang of nobility, and Tarnold finally recognized the crest on her gown. It was their patron, recovered from her malaise. “My lady Erhyn, I did not recognize you! Please forgive me.” Tarnold offered a respectable bow. “Tell me, what mask is this that graces your face? It is familiar yet beyond memory.” “It is made of eldlock.” She spoke in a calm voice. Her words were clear, even as she whispered. “The stories tell that any wood removed from an eldlock will continue to blossom and flower in season with its mothertree, as long as it still stands. No distance may sever their bond.” “It is exquisite, my lady.” “I have interrupted,” Lady Erhyn said, gesturing to the actors. “Perhaps I could suggest a change.” “Why, of course!” Tarnold fidgeted with his hands. He looked to the wings, and to the stage. The mummers were keeping their mouths shut, for once. “Advice from our favorite patron is always welcome.” “All actors were masked in Soates’ day—perhaps all must don masks to channel the strange spirits she saw at death’s door, as she scribbled furiously into the night’s embrace.” “I like that!” Artlo said. “Where is the casket of masks? There were others in that trunk,” he called as he vanished behind the stage. “Now, wait, let’s talk this—” Tarnold was silenced by the sight of the gaunt lady with the eldlock mask clasping her hands together. There was something off about their benefactor. Before Tarnold could put his finger on it, Artlo returned onstage, dragging a trunk that was as long as he was tall. The name Q. W. Soates was engraved on its long side. Suddenly, it struck Tarnold how much the old trunk resembled a coffin. Artlo lifted open the heavy trunk’s lid. “Smells like dead poets,” he said. The man really has no taste, Tarnold thought. A heavy creak of rusted hinges reverberated through the round like the howl of a starving dog. The other two actors craned their necks to peer inside. “Before you choose,” the woman in the eldlock mask said. “Please heed these next words wisely. The hour is late, the show waits to play, and tonight can be truly memorable if all choose the mask that is right for them, for the spirits we become...” “...Inhabit us,” Emile completed. “The mummers’ tenet,” Nenni said. “Whatever flavor of madness this is,” Artlo said, a grin spreading on his face, “I want to be a part of it. Come, Tarnold. Even you must agree that at this late stage, we must perform with the gust of life.” “Intrepid,” the lady said. Tarnold heard the hint of a strange smile on her face. He couldn’t remember... had the nobles’ balcony not been empty when Duarte left? The whole theater was empty... Lady Erhyn struck him as different now, too. She seemed gaunt and haunted. Perhaps the noble lady Erhyn hadn’t entirely shaken off her affliction. The evening chill was settling in. “My lady, I am most pleased at your recovery. Perhaps I can fetch you a cloak?” “Now, this is the mask to honor a forgotten poet,” Artlo said. Lady Erhyn waved off Tarnold’s offer, turning to Artlo. “An ominous choice. The

Duarte had kept the news about Lady Erhyn hidden from Tarnold all day, even though the truth of her passing threatened to burst forth from his lips. Her malaise carried her off in kindred company before dawn, or so the new lady of House Erhyn had said. The news could break the morale of the entire troupe. Tarnold, he knew, would take it exceptionally hard. But just as sorrow weighed down Duarte’s heart, there was a brightness, an exciting turn of good fortune beyond the tragedy. Lady Erhyn, on her deathbed, bade her estate to fund the Mummers’ Round, and Tarnold specifically, in perpetuity. However, as the hour drew later, the inebriated nobles grew weary of the wait. Belligerent and insulted nobility often led to lashings, mockings, and worse: sanctions against future endeavors. As Duarte was about to address the amassed watchers, daubed with ashes and charcoal in mourning of Lady Erhyn, he heard Tarnold’s signal to open the doors. He rushed to the gate and removed the heavy deadbolt. The audience rushed in and stopped short as they found the actors posed upon a stage covered in wilted black-stemmed roses. Their buzzing anticipation was hushed by the macabre tableau. They quickly and quietly found their seats. Lady Erhyn’s seat of honor was the only empty spot in the house. The actors held their strenuous positions while the noble audience waited for Soates’ long-lost and unfinished masterpiece to finally begin. Duarte saw no sign of Tarnold. It was unusual for the dramatist to desert his cast on opening night—normally he would greet the audience before watching from the wings with a bottle of wine. He turned to inspect the opening stance. Nenni and Emile were locked in a mortal embrace. Nenni, wearing the wolf mask, held an arrow that seemed to stick directly into Emile’s side. Emile’s hands were wrapped around Nenni’s throat. Artlo, who was supposed to be playing a philosopher, now inexplicably wore a mask that resembled a dirge crow. He perched atop a prop tree, suspended over the other pair, his arms outstretched like great wings. Dead flowers hung from his arms like feathers. They weren’t even breathing... The audience stayed silent, eagerly awaiting action, but Duarte realized something was amiss. Backstage, Duarte checked the dramatist’s favorite perch. There was no bottle of wine, and no Tarnold, either. Instead there was the last surviving copy of Lambs in the Orchard. He thumbed to the last page. The story remained unfinished, but there was a new line written in Tarnold’s steady hand. The end is not for those who wear no masks. She showed me, and it was beautiful.

Lore and Events
Retrieved from "https://leagueoflegends.fandom.com/wiki/Finishing_Soates?oldid=3251863"
Community content is available under CC-BY-SA unless otherwise noted.