League of Legends Wiki
Register
Don't have an account?
Sign In
Advertisement
in: Lore of Piltover, Lore of Zaun, Short Story, Orianna lore 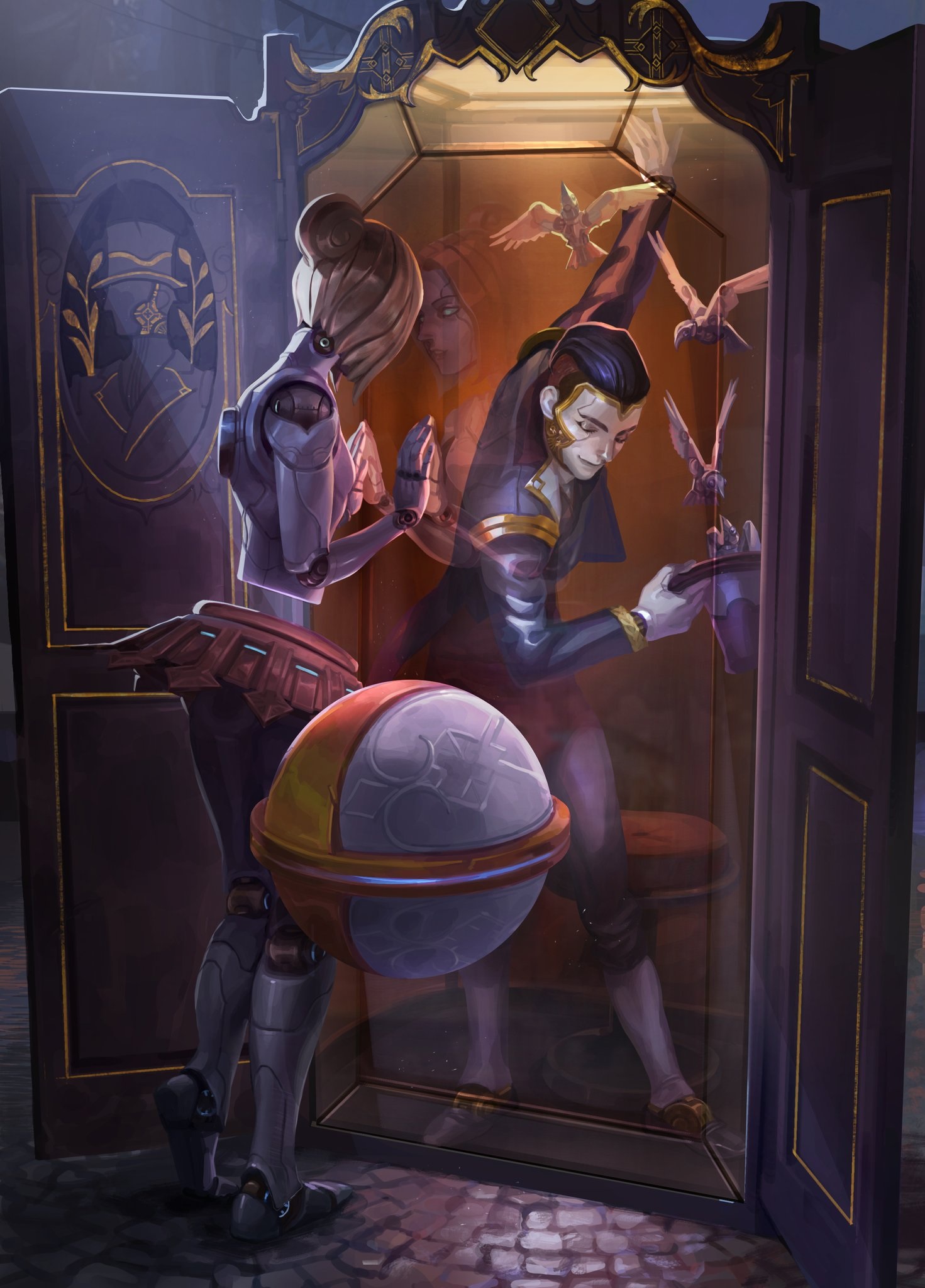 Orianna walked through the fairground, empty and still in the evening gloom. Sir Feisterly's Fantastical Fair opened its gates to delighted crowds of Zaunites but twice a year, and Orianna did not want to miss her chance to see its wonders. She had waited until everyone had left for the day, and the rowdy laughter and accordion tunes had fallen silent. Only the low hum of nearby pipelines pumping steam through the chem district disturbed the quiet. Detritus lay strewn along the ground; colorful streamers and bright balloons mingling with crumpled wax paper that once held sweet jam pastries.

Orianna walked through the fairground, empty and still in the evening gloom. Sir Feisterly's Fantastical Fair opened its gates to delighted crowds of Zaunites but twice a year, and Orianna did not want to miss her chance to see its wonders. She had waited until everyone had left for the day, and the rowdy laughter and accordion tunes had fallen silent. Only the low hum of nearby pipelines pumping steam through the chem district disturbed the quiet. Detritus lay strewn along the ground; colorful streamers and bright balloons mingling with crumpled wax paper that once held sweet jam pastries.

ball hovered beside her as she passed a stall overflowing with roses, which according to a sign, smelled like each day of the week. She walked by a wind-up monkey holding a pair of cymbals, and a cart laden with sugared apples. None of these Zaun-born delights piqued her interest; Orianna had eyes only for the glass cabinet tucked into a secluded corner at the far edge of the grounds.

A glimmering wink of metal flashed in the moonlight. It came from the mechanical boy sitting behind the glass. Orianna had seen nothing like him, and drew closer, intrigued. He was clad in a midnight-blue suit and a silk hat. His skin was a shell of pure porcelain that masked the delicate clockwork gears below, and his eyes shone with glints of silver thread. As Orianna approached him, his lips rearranged into a smile.

"Can you keep a secret?" the boy said. His voice reminded Orianna of softly chiming bells.

"What say we make a trade. My secret, for your name."

"That seems fair. I am called Orianna."

Orianna could have sworn his porcelain cheeks blushed.

"I suppose it's my turn. My name is Fieram. My secret is that I fear the outside world, though I long to see distant shores and far-off mountains."

"Is that why you live in a cabinet?" she asked. "Because you are afraid?"

"From here, the world visits me", said Fieram. "Behind the glass, I am safe. I'm very fragile, you see." He pointed to a hairline fracture on his forearm. "There it is. I'm getting old." Fieram's mouth opened into a lopsided grin.

Orianna giggled and shrugged her shoulders, a gesture she had recently acquired, though she wasn't quite sure if she had used it correctly.

"Oho! You haven't seen my tricks yet", said Fieram. He reached into his sleeve and produced a bouquet of daisies with a flourish.

Fieram removed his hat and dipped his head in a nod. A half-dozen mechanical pigeons fluttered from beneath the brim. He brought his hands together in a clap and the entire cabinet filled with opaque red smoke. By the time it dissipated a few seconds later, the pigeons were gone.

"And that wasn’t even my best execution. Fumbled my sleeve a bit", he admitted, folding his hands. "But small miracles are my specialty. Like you finding your way to me, in this great city! You, above all others."

"We are kindred spirits, you and I. But you already knew that", said Fieram. "It's why you're here, isn't it?" He shuffled his feet. Orianna marveled at the subtlety of his movement.

"It is just that I have never seen another like you", she said.

"I'm one of a kind, aren't I? Same as you", said Fieram. He gestured toward her mechanical frame, and winked again.

Orianna smiled. Fieram leaned in against the glass.

"Fabricated?" she said. "Yes. I am still mastering certain expressions."

"Well now you are going to make me blush."

Orianna's ball, hovering at her left shoulder, nudged her gently.

"Not now", she told the ball. She lifted the mechanical monkey from its stall nearby and turned its key. It scuttled about the floor, eyes lit with a red glow, clashing its cymbals together at every third step before slowing to a halt.

"You are not like him, are you, Fieram? All wound up at the turn of a key?" she said. "You have a mind. You have thoughts."

"I may be comprised of cogs and wheels, but I have dreams, like anyone."

"I know you dream of leaving this place. Surely you are lonely behind this glass. Come with me. We could leave now, together", Orianna said.

"You have no doubt listened to the restless bustle of Zaun, or heard of the grand marvels in Piltover?" Orianna asked.

"I like to ride the Rising Howl at dusk to catch the last of the day's golden rays", Orianna said. "From the very top you can see the harbor beyond the sea-gates, and the endless glistening ocean. From up there, you can imagine the smell of faraway lands."

Orianna's ball whirred as it spun in the air and nudged her again.

"I suppose now is as good a time as any", she said. "Fieram, would you like to see the world? We could leave together, right now. I can protect you."

"I can't think of anything more wonderful", he said.

Orianna circled the glass cabinet in search of an opening. An iron padlock secured a small door at its base. She raised a fist and brought it down upon the lock, smashing it open.

A watchman approached them.

With a glance from Orianna, the ball

shot toward the watchman. It clanged upon impact with his helmet, then hovered in the air as if waiting for a command. Orianna nodded and the ball

radiated waves of coruscating power. Caught in the energy flux, the watchman raised his baton and bashed it into the ball, which spun in midair before returning to his target.

A second watchman ran toward Orianna. She tried to pull Fieram through the door but his chair jammed in the opening.

"Fieram! Can you repeat your trick?"

The ball reverberated with energy as it whirled around the first watchman. His metal helmet fizzled with sparks.

"My tricks?" Fieram reached into his sleeve and pulled out the bouquet as Orianna spun away from the watchman.

The mechanical boy drew the bouquet from his sleeve once more.

Orianna spun toward the watchman, her metal dress fanning out in a flurry of sharp blades until the man backed away, baton raised.

"Get away from him, you!" said the watchman. "That's our property you're tampering with!"

"From here, the world visits me", Fieram said.

He tipped his hat and pigeons poured out. The watchman aimed his baton at Orianna's head, and she ducked just as Fieram clapped. The baton shattered the side of the glass cabinet and crimson smoke poured from the opening, obscuring all movement.

The first watchman had responded to the ball's galvanic attacks with rageful abandon, throwing all his weight into every punch. The ball was relentless, however, and shot a final blast of energy toward his helmet, and the watchman fell down, unconscious. Whirring in satisfaction, the ball flew to Orianna. It unleashed voltaic waves toward the second watchman, rendering him motionless.

Orianna stepped into the smoke-filled cabinet. She lifted the mechanical boy from his chair but his legs would not flex to stand.

"Leave? I'm afraid I don't know what you mean." A pair of metallic pigeons flew through the broken glass, but dropped to the ground a few feet from the door.

"Fieram, stand up so we can go", Orianna said, her face falling. "Please."

"Oho! You haven't seen my tricks yet." He pulled the bouquet from his sleeve.

Orianna ignored Feiram's attempt to tip his hat and dragged him, still fixed in a seated posture, from the glass enclosure. Outside, her ball had cornered the second watchman, who had collapsed in a buzzing heap.

"And that wasn't even my best execution. Fumbled my sleeve a bit", said Fieram.

"You are not... your voice is... repeating?" Orianna said. His head lolled back awkwardly and she held it upright.

"My secret is that I fear the outside world", he said.

He was nothing more than a simple automaton, a spectacle for the crowds.

"I was certain you had a mind. Had thoughts. Like me", she said.

Fieram looked up at her with eyes that glinted with silver. "I'm one of a kind, aren't I?" He shuffled his feet nervously, though they were in midair. "Same as you."

The ball returned to Orianna and whirred gently.

"We should go", she whispered. She set Fieram back upon his chair, which she placed just outside the shattered glass cabinet. "I wish you well."

"Small miracles are my specialty", he said. "Like you finding your way to me."

"Goodbye, Fieram", said Orianna softly. The two watchmen lay unconscious on the ground. The ball hovered at her side as she walked away.

She did not look back until she was clear of the park's towering gates. As she turned, she thought she saw a glint of metal winking in the distance.