< Fiddlesticks
View source
watch 02:52
Roblox: DeepWoken - The Loop
Do you like this video?
Play Sound 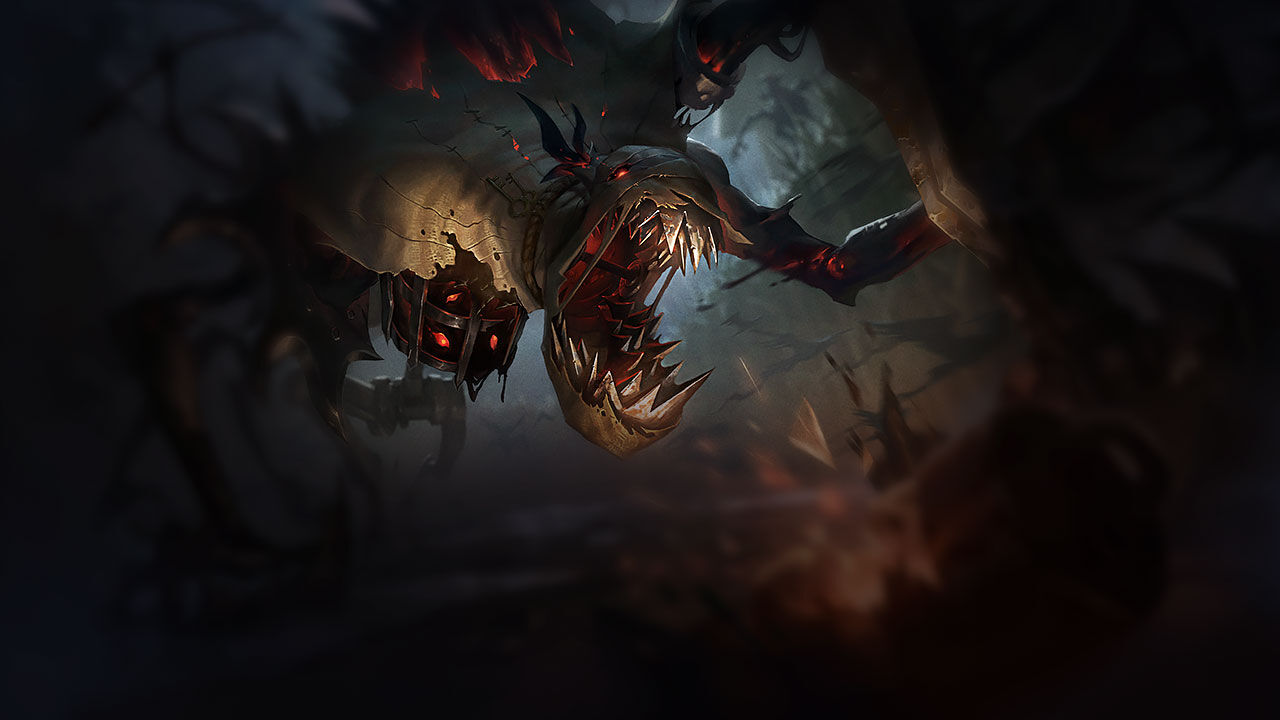 Fiddlesticks is a champion in League of Legends.[1]

Innate - Scarecrow Effigy: Fiddlesticks begins the game with an exclusive

Scarecrow Effigy, which permanently occupies the trinket slot. Fiddlesticks can pretend to be an Effigy by standing still and not acting nor being acted upon for 2 seconds, during which it adjusts its body into a scarecrow and extends its arm out to expose its lantern.

Innate - A Harmless Scarecrow: From level 6 onward, placing an

Effigy also summons a demonic eyeball at the location that grants

obscured vision of enemy units that are not

visible in the area for 6 seconds while also

Passive: While Fiddlesticks has been out of combat for at least 2.5 seconds and is not

visible to the enemy team, or is pretending to be an

Effigy, Fiddlesticks' next damaging ability causes all targets struck to

flee for a duration.

Targets feared by Fiddlesticks are placed on a cooldown equal to Terrify's cooldown, during which they cannot be feared by it again.

Active: Fiddlesticks launches a crow at the target enemy that upon arrival deals them magic damage and causes them to

flee for a duration. Terrify has a minimum damage threshold and is capped at 400 against

Against targets with a cooldown, Terrify instead will have its

Minions are always feared if Fiddlesticks is not attacking them and there is no enemy champion in its view.

tether between itself and each nearby enemy over the cast time, then

channels for up to 2 seconds, harvesting the souls of tethered targets,

revealing itself in the process.

While Fiddlesticks is channeling, tethered enemies are

revealed and dealt magic damage every 0.25 seconds, with the last tick dealing additional magic damage. Total damage is reduced to 50% against

heals itself for a percentage of the pre-mitigation damage dealt, reduced to 15% against minions.

Bountiful Harvest ends if all targets have died or broken their tethers. If the channel was not interrupted, 60% of the remaining

A nearby enemy is required to cast this ability. Fiddlesticks does not need

sight of a target to tether itself to them.

Active: Fiddlesticks slashes the target location with its scythe, dealing magic damage to enemies within the area and

slowing them for 1.25 seconds.

Enemies hit in the center of the area are also

channels for 1.5 seconds, then

blinks to the target location upon completion with a murder of crows flying wildly around it for 5 seconds, dealing magic damage every 0.25 seconds to nearby enemies. 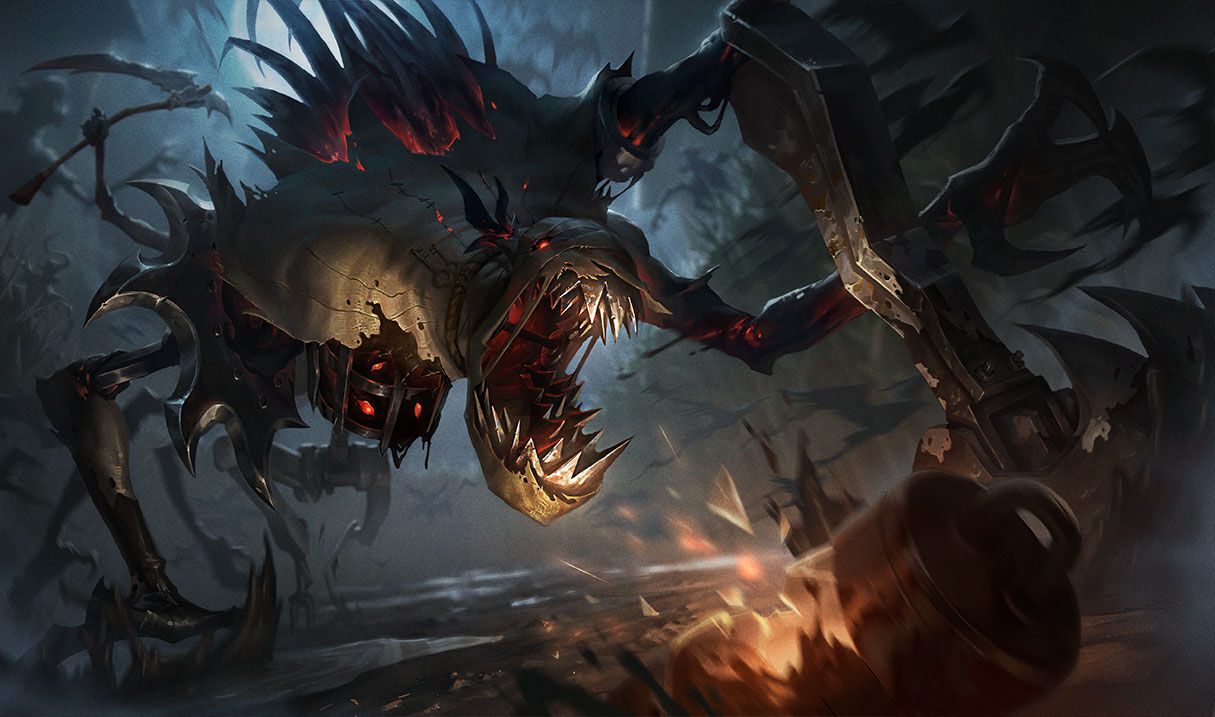 585
21.02.2009
Something has awoken in Runeterra. Something ancient. Something terrible. The ageless horror known as Fiddlesticks stalks the edges of mortal society, drawn to areas thick with paranoia where it feeds upon terrorized victims. Wielding a jagged scythe, the haggard, makeshift creature reaps fear itself, shattering the minds of those unlucky enough to survive in its wake. Beware the sounding of the crow, or the whispering of the shape that appears almost human… Fiddlesticks has returned. 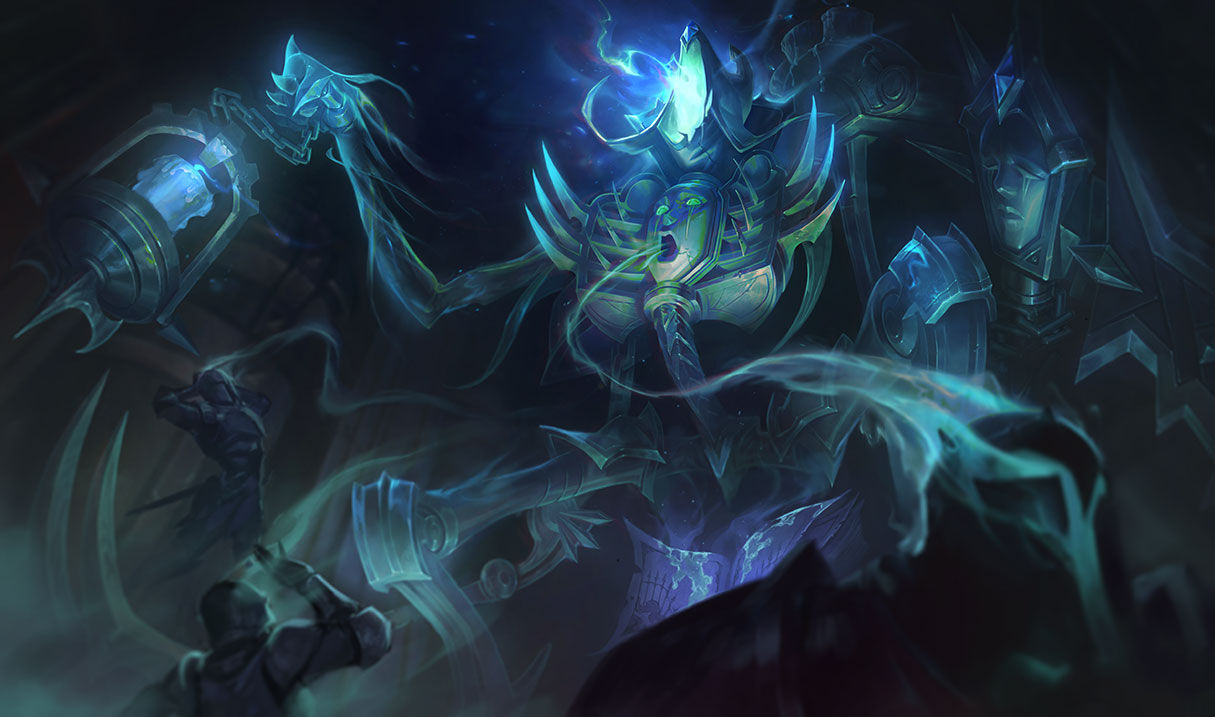 520
16.03.2010
A gruesome spectre, rumored to stand eternally watchful over a peculiar book of fables. Brave knights and cruel sorceresses alike have tried in vain to reach the tome, but none have ever returned. Perhaps that lost queendom of old isn't so fictional after all… 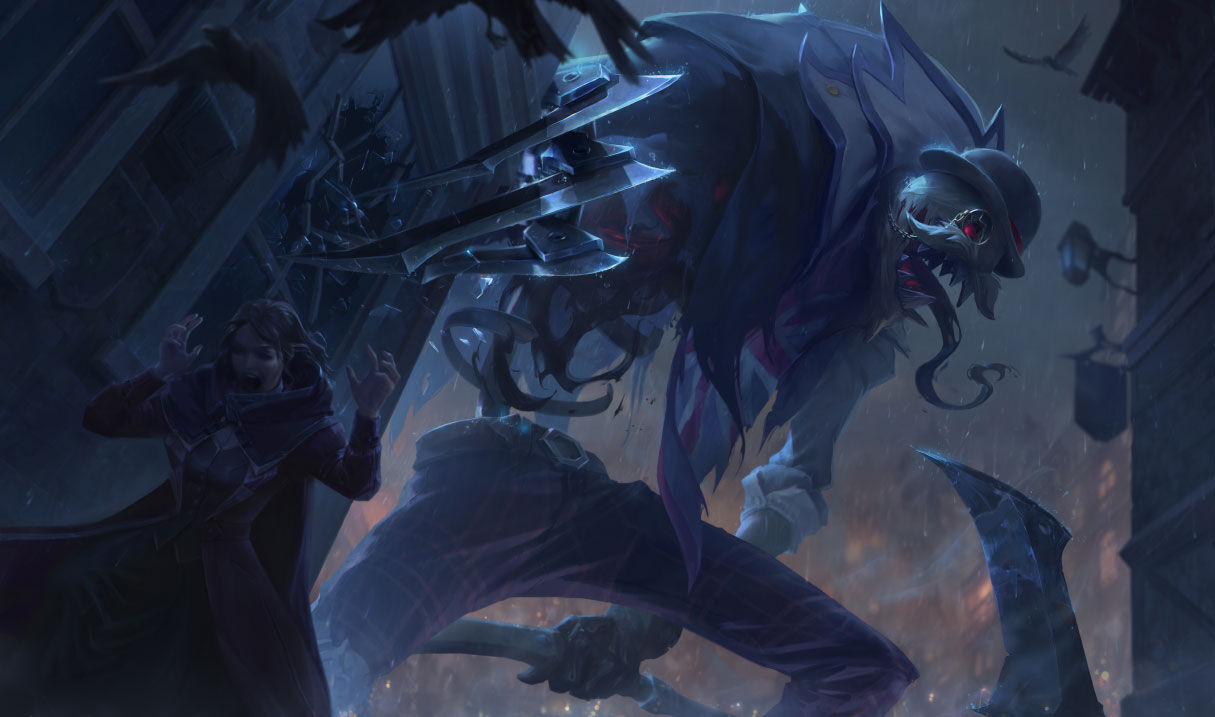 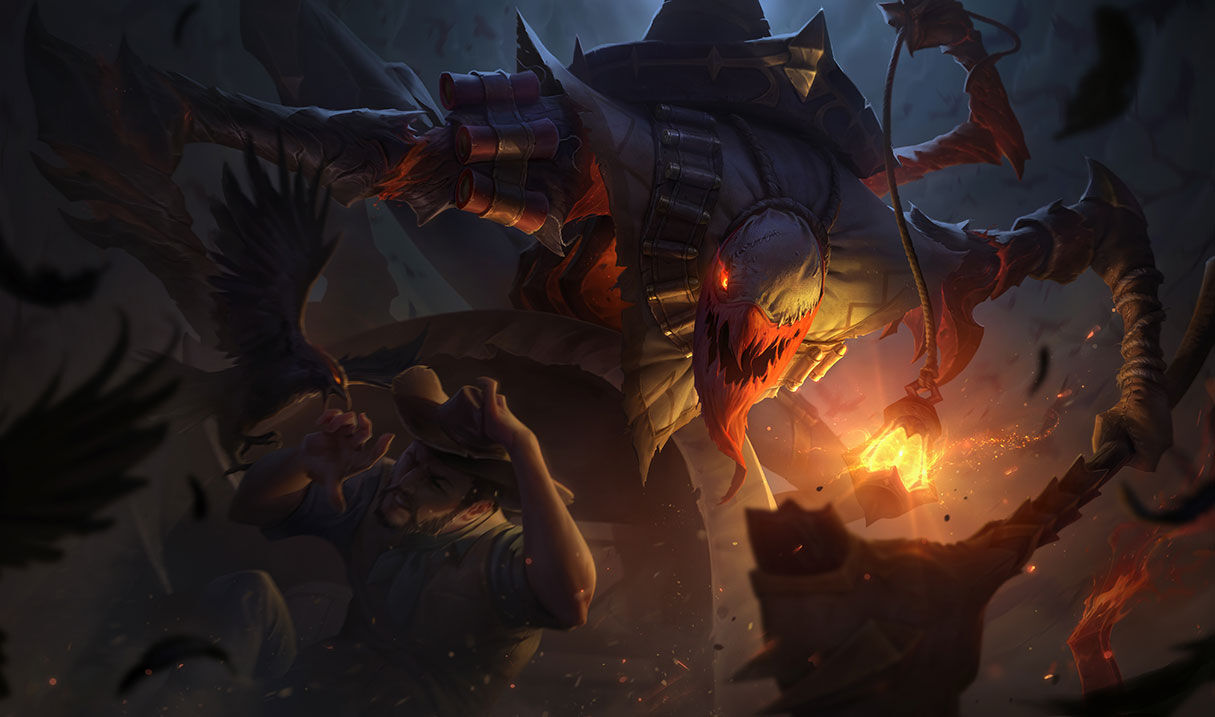 520
10.08.2010
If the day ever comes, riding those dusty trails, when a thin man in a wide hat appears far in the distance… run. Ride hard and fast and never look back, lest the horror known as Fiddlesticks drag you to from your saddle, and into darkness. 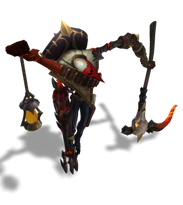 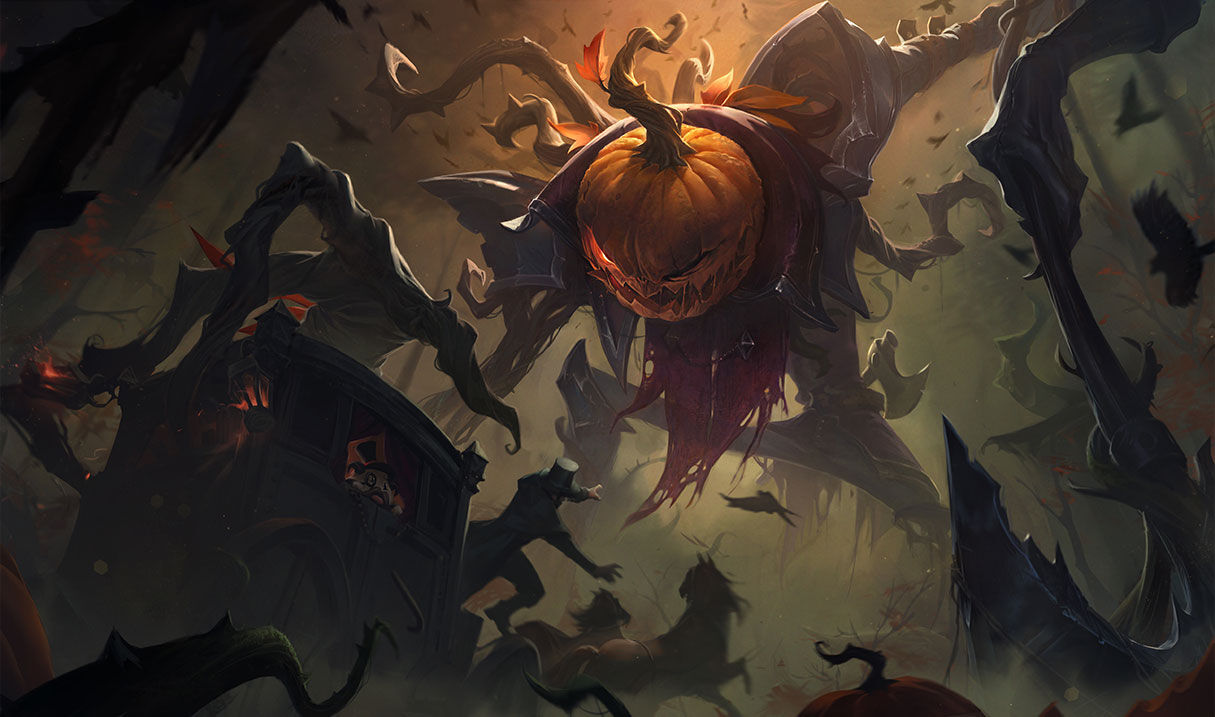 520
19.10.2010
Carriage drivers are cautioned to stick to well-traveled highways, especially during the witching season. Strange things can happen on those old, moonlit roads, where no birds sing, and something enormous moves within the fog. 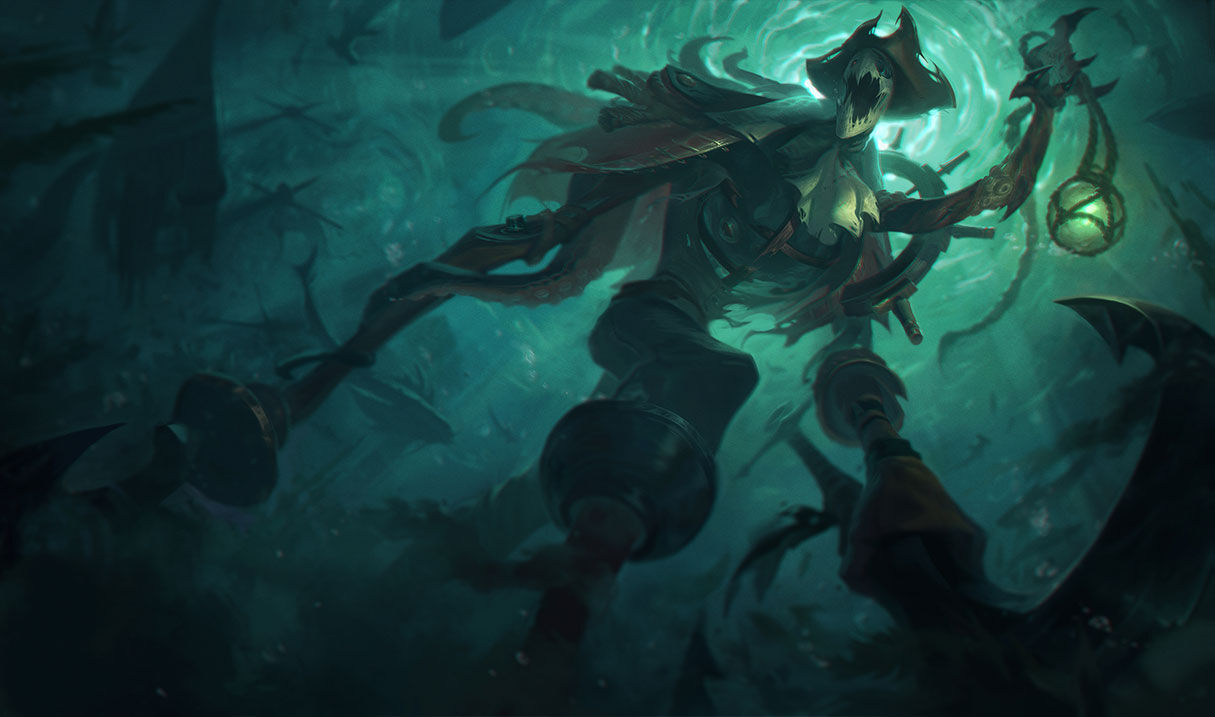 Fiddle Me Timbers
View in 3D 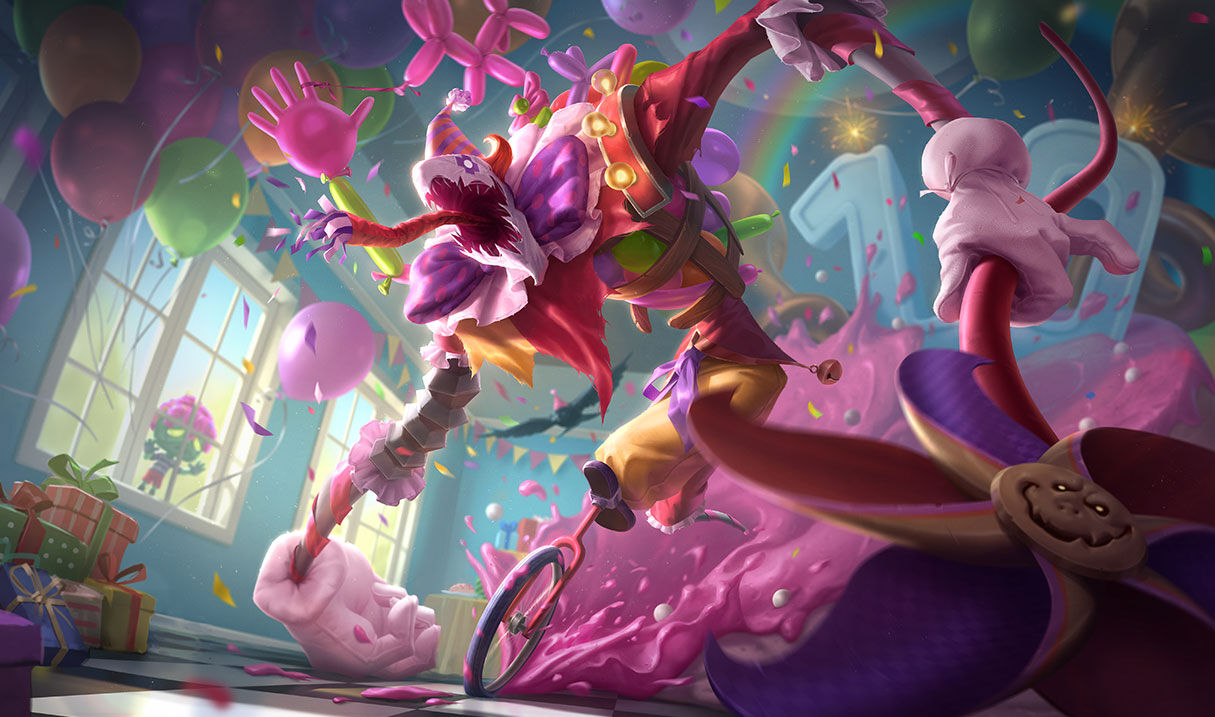 975
27.10.2011
Everyone told you hiring a clown would be a good idea. “Clowns are great for parties,” they said. But now everyone's missing, and the power is out, and something's laughing just down the hall... 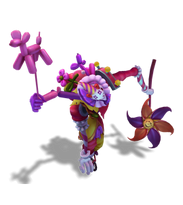 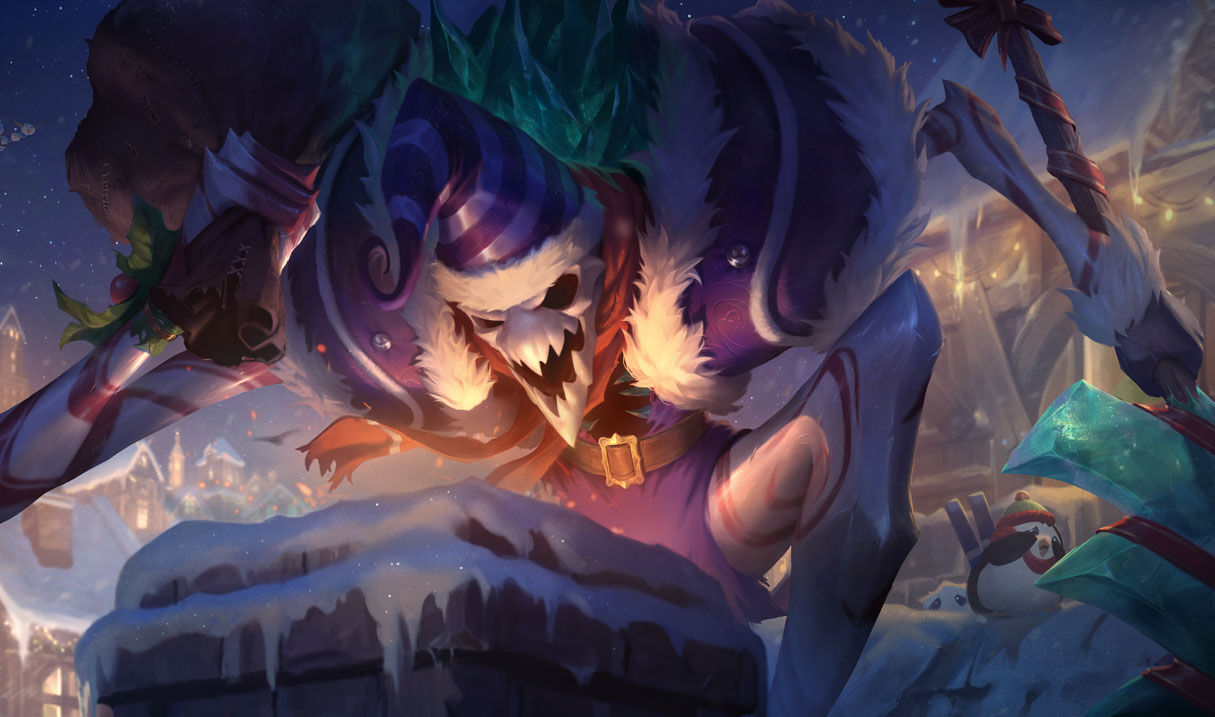 975
14.12.2012
As lights go out across the Winterlands in preparation for Snowdown season, something ancient and terrible rises from the darkest corners of the Poro King's lands. Devoid of thought or purpose, it hunts for holiday revelers as if possessed, cutting down anything that crosses its path. 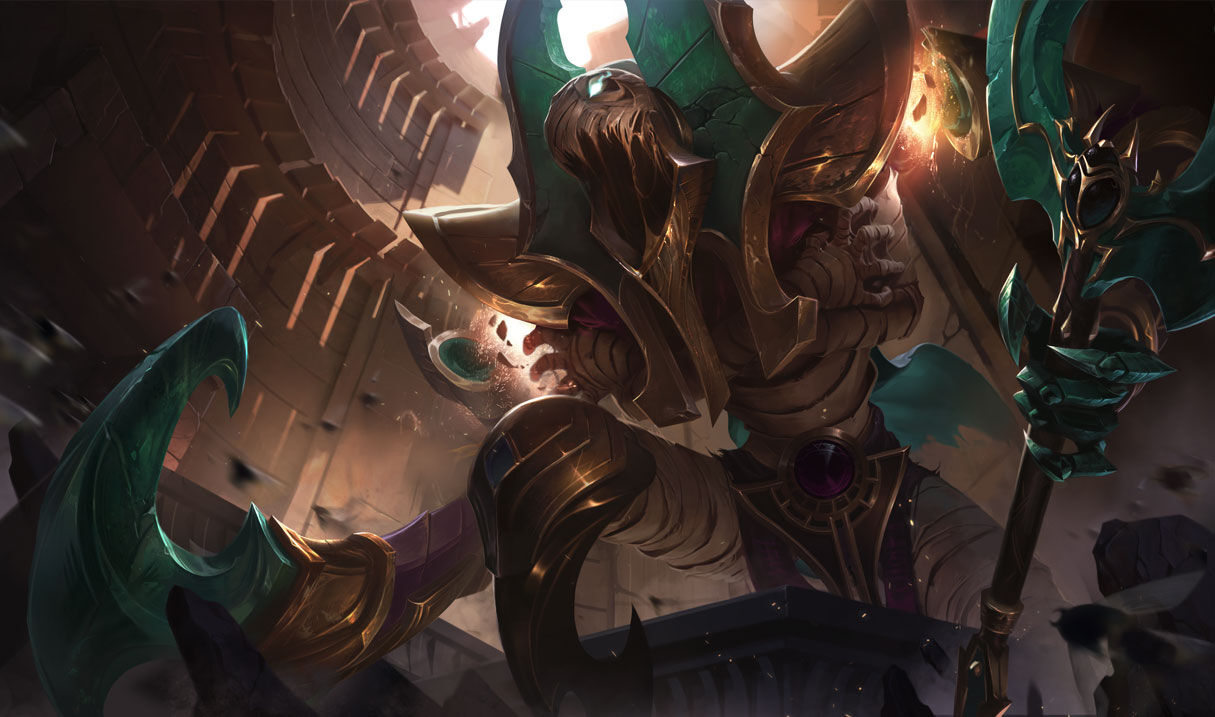 1350
29.04.2015
Once upon a time in a faraway land, a jealous young emperor invoked profane summoning rites in exchange for power. Yet when the ancient horror Fiddlesticks stepped forth, it did not aid the boy--and in an instant, his empire was utterly destroyed. The fiend was trapped beneath the ruins… until now. 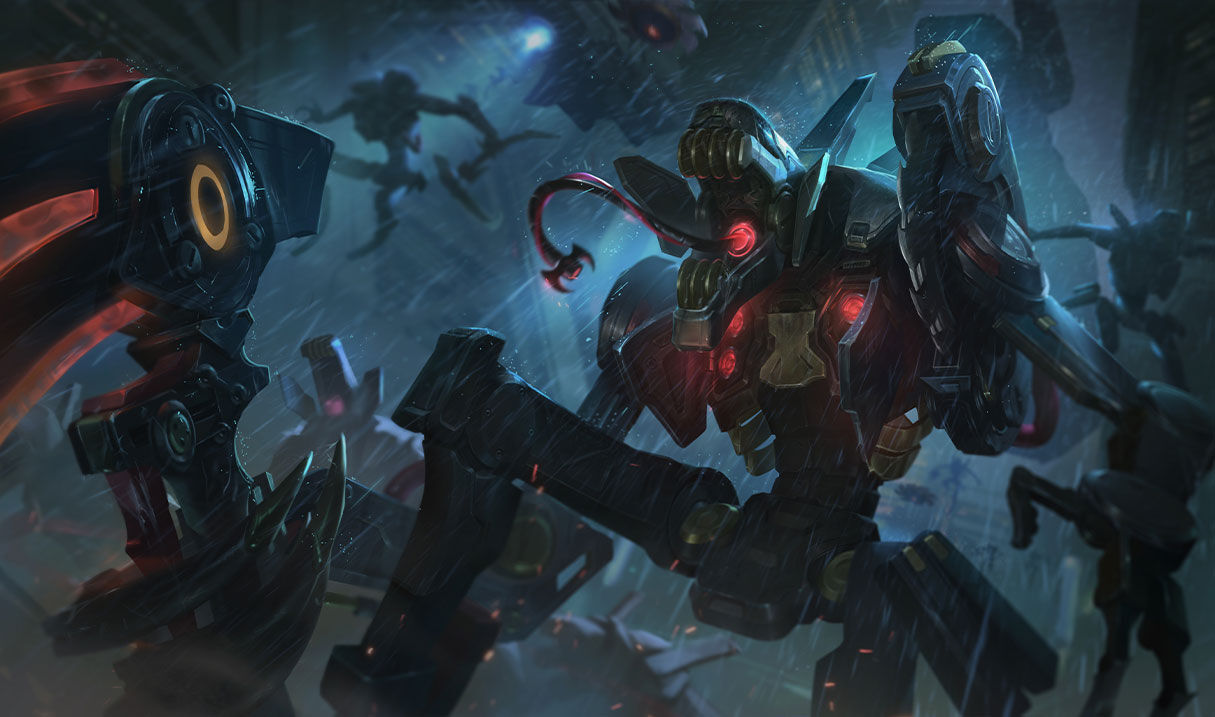 1350
08.11.2018
The Remembrancers' worst fears have been realized. Emerging from tears in the fabric of spacetime, hordes of faceless, robotic marauders appear across the multiverse, destroying everything in their path. Fiddlesticks is only a single unit in this endless invasion force, assimilating any technology it comes across, and eradicating all life. 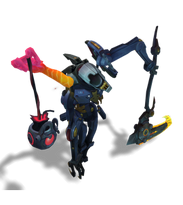 Fiddlesticks, the Harbinger of Doom