Pengu are an avian species. These aquatic flightless birds are mostly seen around the tundra region. Highly adapted for life in the water, pengus have countershaded dark and white plumage, and their wings have evolved into flippers. They can also be seen 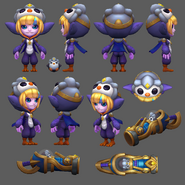