The minion kill count is a tracked score, commonly referred as Creep Score (CS). In the early and mid game, CS and Kill to Death Ratio (KDA) can be used to gauge a player's performance compared to their respective lane opponent. 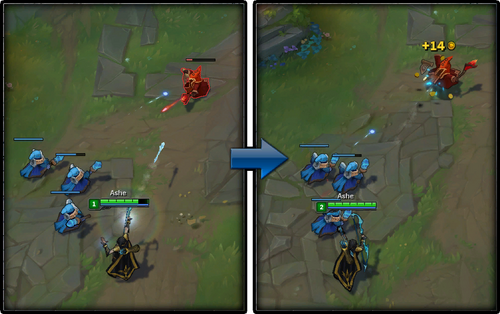 Gold is granted to the champion that deals the killing blow on a minion or monster. This is known as a 'last hit' and is considered one of the most important skills in League of Legends. Many players will use their basic attack to Last Hit, but several champions, especially AP champions, also have low cost executes or area burst to last hit. Melee minions can take two tower shots and be easy to attack for most AD champions. Caster minions are best to hit once after taking a single tower shot. 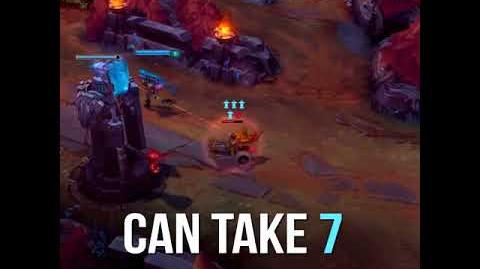 A fast push aims to accumulate a large minion wave by allowing a given wave to push with a numbers advantage, creating immediate lane pressure ideal for quick responses. To create a fast push, a laner would remove all but the weak caster minions (they have no armor/magic resist) as an easy force for the allied wave to overtake.

A slow push accumulates a large minion wave by allowing it to push at the slowest possible rate while maintaining advantage, the resultant wave can pressure a tower and serve as a dangerous concern for the enemy. In enemy territory, the numbers advantage will have to become greater and greater to counteract the quicker timing of enemy reinforcements. To create a slow push, a laner would remove all but melee minions (they have armor/magic resist) as a formidable force for the allied wave to overtake. Seige and Super minions will need to be removed due to their sheer impact on the battle.

Slow pushing becomes ideal when a laner is required elsewhere and cannot maintain the lane pressure, such as when teams gain enough power to start focusing on kills and objectives. By leaving their wave at an advantage, it will eventually accumulate into a force that substitutes the need for a champion.