For the item, see Faerie Charm.

For the card, see Pix! (Legends of Runeterra).

Faerie are playful, winged, humanoid creatures that are smaller than the yordles. They are born from lily flowers in The Glade, as stated by

Pix himself. Also, they inhabit the forests of the latter. They have capricious abilities of transfiguration and matter distortion and their glades seem to exist in dimensions far removed from the normal flow of time. One can only enter their glades when invited by a Faerie, as

Pix has done with the yordle 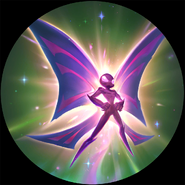