League of Legends Wiki
Register
Don't have an account?
Sign In
in: Lore of Runeterra, Entries, Ezreal lore,
and 8 more

Events in chronological order as suggested on the Universe map. 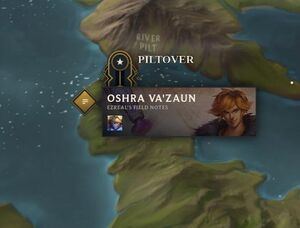 (near Zaun)
No one appreciates what’s beneath their feet. I mean, there’s an entire Shuriman outpost buried… uhh, I mean flooded… down under the Sump. Those ancient Shurimans really flexed their imperial muscles, back in their day. (Must have been all that Sun Disc magic?) You never know when—or where—you’re going to find one of their temples, or ossuaries, or arcane reliquaries, filled with esoteric artifacts.

The Vault of Resplendent Holies is down here, somewhere, under Zaun, and I’ll bet there’s a whole lot of holies still left to be discovered. 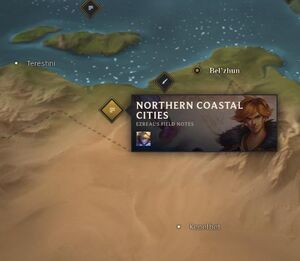 (near Bel'zhun, southwest of Zaun)
All of this belongs to Noxus. In my experience, one always ends an adventure in enemy territory—so it’s generally wiser not to start there. Sometimes it can’t be avoided, though. For example, Bel’zhun is the place to hire the best Shuriman guides. My first guide, Kasdjar, was especially knowledgeable, charismatic, and hardworking. What he was not, however, was made of iron. That’s why he was smooshed to death by a falling obelisk. 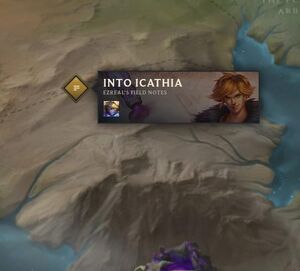 (near Icathia)
I took one look at this wasteland and was like “Well, that’s beyond my pay grade!” 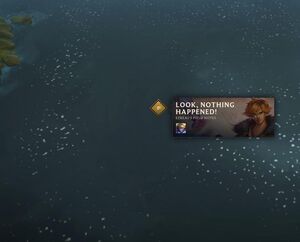 (seas southeast of Ixtal Jungle)
There’s an island here. It’s not on any maps, but it’s there. I was marooned on that deserted rock for a week. It’s home to a colony of aggressively flirtatious… things? I don’t know. Walruses, maybe? 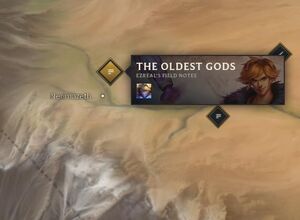 (Nerimazeth)
As I outlined in my pioneering work On the Origins of Ascension (self-published, many copies still available) Nerimazeth was the original capital of Shurima. I’m talking waaay back, like, before there was even an empire. According to my trusty former guide Kasdjar, the land outside this city was home to the first iteration of what is now known as the Sun Disc. That’s got to be right up there on my list of Lost Wonders of the World! I’m guessing this prototype failed because… Well… historically, Sun Discs don’t seem very stable. After Nerimazeth, the Shurimans apparently started over, and built an even a bigger one. Surely, history could not repeat itself?! Heh.

I guarantee there’s some interesting stuff buried out there. Old stuff. Priceless stuff. 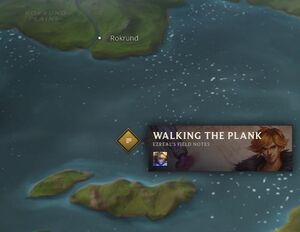 (seas west of Piltover & Zaun, south of Rokrund)
Ah, my inaugural journey! I had stowed away on a mercantile vessel to find the lost tomb of Ne’Zuk, but the captain caught me red handed, pilfering some lime-grog. They were going to throw me overboard, until I convinced them otherwise.

As the ship’s logs will attest, “a patch of rough seas” claimed our navigator. My quick thinking (and star charts) not only saved the day, but earned me a field promotion. That’s a big deal, since the navigator is essentially the captain, minus the funny hat. 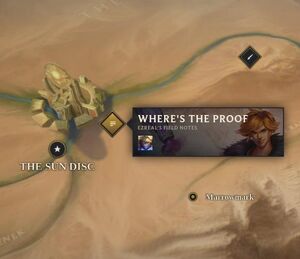 (near The Sun Disc)
Rumors say the ancient city has risen once more. I’m skeptical.

Too Close For Comfort 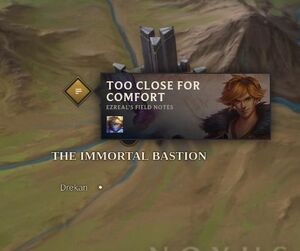 (near The Immortal Bastion, Noxus)
I’ll give credit to the Noxians—they do a couple of things well. One of them is ignoring the great, imposing monoliths that practically shimmer with dark energy in the heart of their capital. The other thing is tacos. I strolled the promenades around the Immortal Bastion while sampling their cuisine. Impending dread makes a great taco seasoning, I must say. I was supposed to be meeting with a new contact, to collect some archival materials. She never showed, but a few shady types started following me, and one of them eventually handed me a rose petal. You guessed it, the petal was black. That was enough for me! Found a single

black petal every day, until I made it back over the border—one of them was at the bottom of my satchel. Ominous trip. 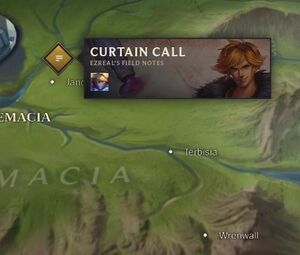 (Jandelle, Demacia)
Jandelle’s this charming hamlet… blah blah blah. What I’m after is a pair of

Kindred masks. Not just any Kindred masks, but the originals—carved from the wood of a supposedly bewitched eldlock tree. Real spooky, storybook stuff, eh? But myths are rooted in truth. A famous actress died on stage while playing the dual role of Kindred, in Demacia. Strangest part was, the theatre company said the prop masks created for the performance never left her dressing room.

The masks she wore on stage? Vanished. Probably in some collector’s show room. Makes you wonder, though. 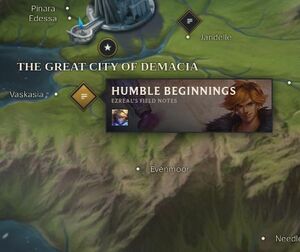 
Rumor has it, a certain Demacian national treasure—one Jarro Lightfeather—was born around here. Perhaps you’ve heard of him? 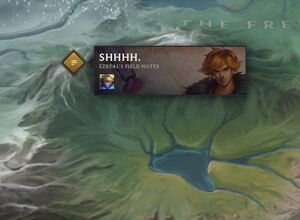 (east of Rakelstake, Freljord)
If the

Avarosans ask… just say you haven’t seen me. Got it? GOT IT?

This has absolutely nothing to do with that silver totem I procured from the top of a freezing mountain. That was a different guy. We just have the same name. And hair. 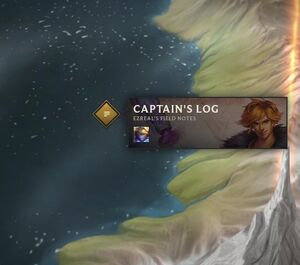 
Nothing more awe-inspiring than seeing Mount Targon at night, from the sea… especially when you’re quelling a mutiny. (Note to self: lime-grog is rationed FOR A REASON) 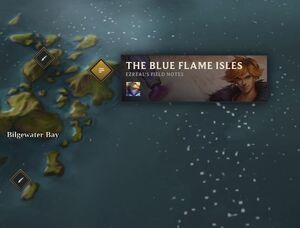 (near Bilgewater)
Little-known fact—these are actually named the Serpent Isles. It’s important to know the local culture. I joined in their ceremonies a few times. There’s a lot more going on than meets the eye. One

priestess carries around a massive idol that I desperately want to go back and examine. I got some real “cosmic” vibes from that fetish…

Anyway, the Buhru are one of the more secretive religious groups, claiming to predate pretty much everything else on Valoran or Shurima. I suspect their influence is much larger than anyone guesses. 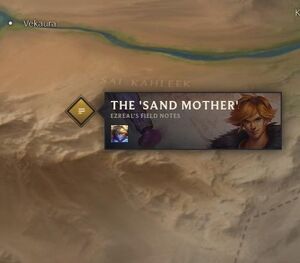 (south of Sai Kahleek)
This desert is filled with life… and a lot of that life is Xer’Sai. Sure, they’re easy enough to blast to bits with some bullseye shots, but they just keep coming and coming. I took shelter in this circular cavern that I quickly realized was a gargantuan Xer’Sai burrow. My local guide, poor old Kasdjar, swore it was the lair of the

That was a big NOPE for me. We hightailed it out of there pretty darn quick. 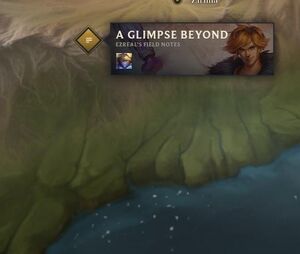 (south of Renek River, south of The Sun Disc)
All eight tribes of the Southern Dune Wanderers somehow got it into their heads that I’d absconded with their sacred medallion. They chased me through the mountain passes for a week before giving up, and I finally had a chance to rest. (Joke’s on them—my antiquities dealer confirmed the medallion was a fake!) That’s when I saw it. A shimmering gap in the bare rock, opening up to some other realm beyond it. I decided to check it out first thing in the morning.

Big mistake. The whole thing had vanished. I camped out for a week, but never saw it again. Was it just a hallucination… or did I find a portal to the mythical Bandle City?

The Lost Tomb Of Ne'Zuk 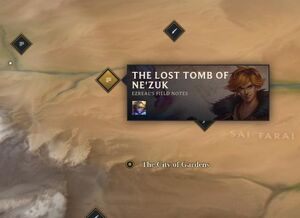 (east of Nerimazeth)
This one was a bit of a twofer. There was an emperor’s burial chamber, sealed and intact, right here—but it’s definitely not there anymore, because underneath that tomb was where old Ne’Zuk was laid to rest… and Ne’Zuk’s tomb was destroyed. By me.

That’s where I found my gauntlet. Pretty cool, huh? 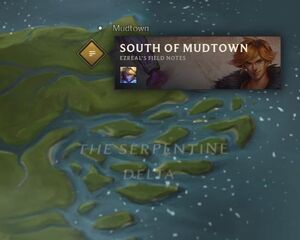 (south of Mudtown, southwest of Bilgewater)
Got into a high-stakes game of Krakenhand with a gang of high-seas marauders, here. Well, I mean, technically they were my captors. But after I proved my worth at the card table, we all became fast friends. They made the mistake of upping the ante on a triple-tentacle dice roll, you see—I was holding a whole hand of nothing, but they didn’t know that. Apparently, my nothing was better than their nothing, once the dice were in play. (Note to self: learn how to play Krakenhand)

Won back my gauntlet, along with a nice antique flintlock. Actually, I wonder how the survivors are doing? I should look them up. Great guys. What’s left of them, at least. 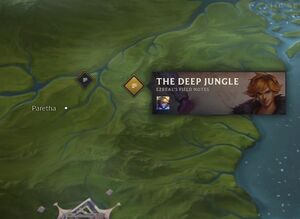 (near Paretha, Ixtal Jungle)
Locals call the area around Paretha the “Vale of Silver Mist”, and I can see why. It’s a magical place… all alluring and mysterious. I personally had an out of body experience while hunting for The Elixir of Uloa. I saw myself in the jungle, peering back at me with

curious eyes from behind a tree. I looked pretty good. Then the tree talked to me. I swear it followed me for a while.

If this doesn’t seem like something you’d enjoy, then you should definitely avoid drinking the taffa-flower water. 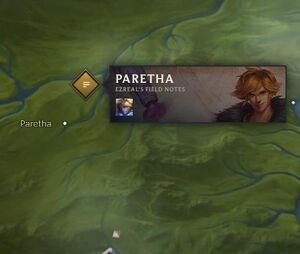 (near Paretha, Ixtal Jungle)
Ah, Paretha! Such a charming village. Try the taffa-flower water, it’s got a real kick. A tribal shaman here once told me my soul was “entwined with” the Aspect of the Wanderer. Didn’t peg her for a Targonian… but I suppose looks can be deceiving.

Anyway, I stole the Elixir of Uloa from a nearby temple. The temple didn’t survive. Probably shouldn’t show my face in Paretha for a while. Let the heat die down, if you know what I mean. 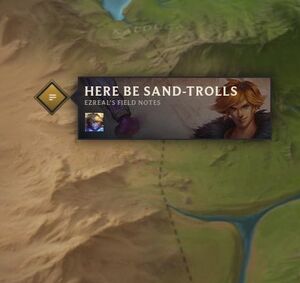