Eye of the Herald
Edit

Passive - Glimpse of the Void: Gain

Channel for 1 second and summon the Eye of the Herald in front of you, which is crushed over 5 seconds to summon an allied

Rift Herald that sieges enemy structures. This effect is placed on a 3-second cooldown while in combat with non-

Rift Herald when it dies. It is available only on Summoner's Rift. Only members of the team that killed the Rift Herald can pick it up. If nobody picks it up it disappears after 40 seconds.

The Eye of the Herald replaces the trinket item in your trinket slot. You can break the Eye to summon

Rift Herald to aid your team.

Enemies hear an audio cue when the Rift Herald is summoned. 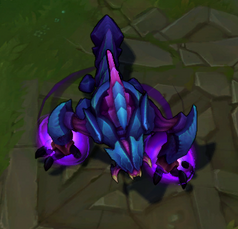 A champion under the effect of

Glimpse of the Void.

A champion summoning the Herald by consuming the Eye.
Add a photo to this gallery