Expedition was a non-Constructed game mode in

Legends of Runeterra. Instead of using a pre-built set of cards to compete, players build their decks at the beginning of trials, and as the mode progress. After finishing two trials, the player receives a reward based on the better performance of the two and ends the Expedition. In order to attempt expeditions, a player requires

200 for the first 3 in the week, and after they can play for free with reduced rewards (Called Open Play).

Unlike other modes, players don't use cards from their collection. Instead, players build their decks from picking and trading cards.

When players build their deck, they add cards to their deck until they've accumulated a set of 30 cards. Each picking round, the game offers 3 options for a player to choose from, player then pick the set of cards they like and add to their deck.

The first two picks are for champions. Then, they alternate between Synergy Picks and Wild Picks. Synergy Picks offer cards that are based on every pick the player has made so far. Wild Picks offer random cards, which may not be synergistic with the deck. The final pick is a Trade Pick, where the player is offered 3 different trades and may choose to trade one of their picked cards for another card.

Unlike other modes, the player's deck is not as limited:

All picks are based on card archetypes. There are a total of 23 archetypes in the mode. Archetypes are list of cards which are synergistic with one another. Deciding the archetype starts with the first one out of three champions choice, each of which comes from a different archetype and a different region. For the second pick you're given a selection of another champion out of three, with their regions decided based on the first pick.

Demacian side of an archetype called "Shield Wall", which consists of her and

4Shen using a lot of

barriers. Picking Fiora first will not guarantee getting Shen but guarantees seeing an

Ionian archetype with an Ionian champion.

Out of the 23 archetypes, 6 are mono regions, 15 covering all the duo region pairings, and 2 bonus archetypes (which are outside the structure), one based on poros, and one based on

The archetype Cataclysm has 131 cards in it.

Synergy Picks (see above) offer cards based on the archetypes that have been picked the most so far.

Wild Picks will show you random archetypes within the regions you're in. There's still a chance to see the archetypes from the synergy picks.

On the contrary, archetypes that are based on a low amount of synergy cards will have those cards show more often in Wild Picks (i.e.

For each Expedition embarked, players have two trials.

In each trial, players compete in games, until players win 7 games or lose 2 games consecutively. However, the player does not have a second chance if they lose their 7th game. A trial can be surrendered early to end it at the number of wins it's on.

Winning games allows players to strengthen their deck, by trading cards or adding more champions. Players reaching the 6th win will be granted a bonus trade for each win. This is to balance the trades performed by each player, since trades are given for each match played, independently from losing or winning. Without this balancing, a player losing 6 matches before reaching the 6th win would have had up to 6 more trades performed than the opponent.

You only match against people who have the same number of champions in their deck. 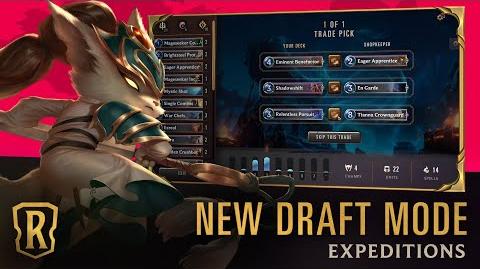