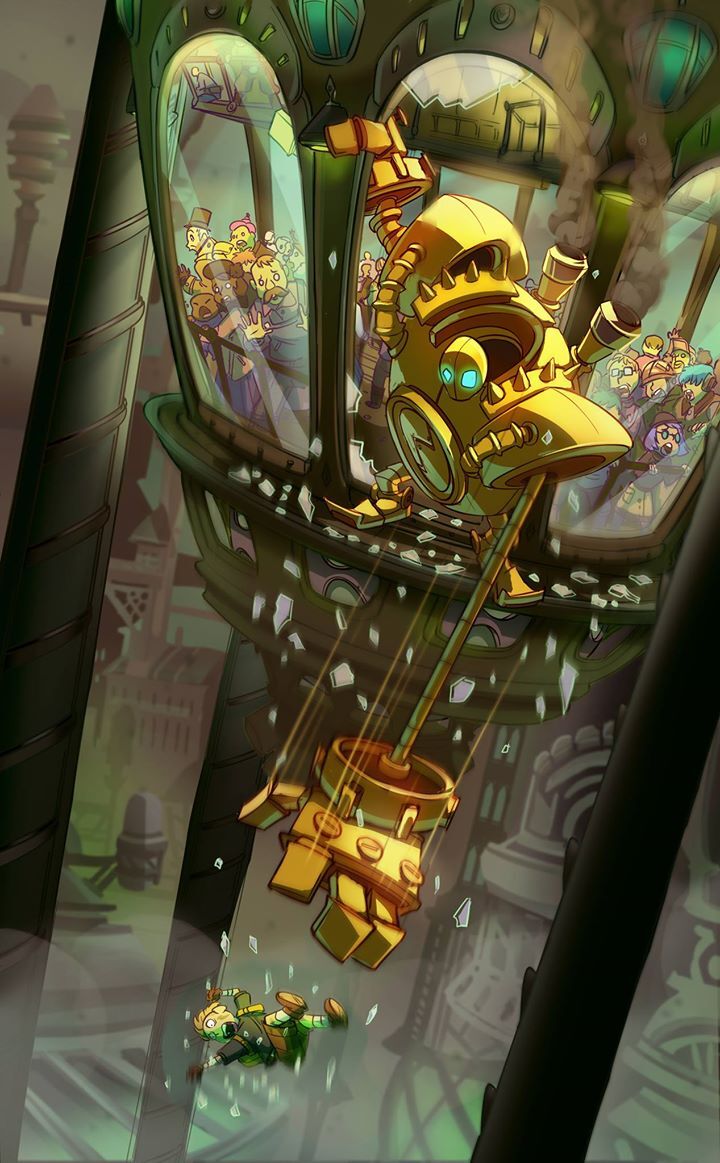 But to me the Howl is not a single lone cry. It is an orchestra of noise, a melodic blend of a thousand unique sounds. It is why I am drawn to the machine.

The multi-tiered elevator, supported by three vertical structural beams which span the height of the city, descends to the Promenade level and slows to a lurching halt.

"Disembark for the Promenade!" the conductor announces, her voice magnified by a bell-shaped sonophone. She adjusts her thick goggles as she speaks. "Boundary Markets, College of Techmaturgy, Horticultural Center."

Passengers pour from the descender. Dozens of others board and spread throughout its floors: merchants traveling to Zaun to trade in the night bazaars, workers returning home to sleep, wealthy Zaunites visiting night blooms in glass-domed cultivairs. Then there are the unseen riders who have made the Howl their home. I spy them scurrying in the shadows: plague rats, shadowhares, and viridian beetles.

Sometimes I climb down the crevasses to descend to the Sump, but tonight I long for the harmony of noise I know the descender will create.

Instead of entering through the doorway, I swing around the outside and lock my grip on the bottommost bar where ridged steel brackets frame the glass windows. My metal plates clank as I clamber onto the Howl, drawing stares from the passengers and what looks like a grimace from the conductor. My knowledge of facial expressions grows each day.

Most passengers ride within the compartment, away from the cold and soot, but outside, in the open air, I can hear the satisfying click-clack of mechanical parts snapping into place and the soft hiss of steam releasing as we sink into Zaun. And besides, I don't easily fit through most doors.

A small boy clings to his sump-scrapper father's hand and gapes at me through the window. I wink at him and his mouth opens in what I estimate is surprise. He ducks behind his father.

"Going down!" says the conductor. She rings a large bell and adjusts the dials on a bright red box. I can almost feel the commands buzz as they surge through wires into the descender's engine.

Below us, the iron pinnacles of Zaun's towers and green glass cultivairs glitter like candles in the dimming light. The Howl whirs and creaks as its cranks spiral down against the three towering beams, weighted down with iron, steel, and glass. A blast of steam whistles from the topmost pipe.

Inside the cabin, the sump-scrapper and his child look on as a musician tunes his four-stringed chittarone and begins a sonorous melody. His tune synchronizes with the clacking gears and whirring machinery of the Howl. The father taps his foot to the rhythm. A beetle snaps her pincers as she scrambles away from the man's heavy boot. A gang of chem-punks lean against the wall in soft repose, a pause so unlike their usual frenzied jaunts through the city.

The Howl whirs in its perfect fusion of sounds during our descent. I marvel at the symphony around me and find myself humming along to the deep buzzing tones. The rhythm thrums through me and I wonder if those around me feel it.

"Entresol!" the conductor calls out as the descender slows. A pair of couriers carrying parcels wrapped in twine disembark, along with a crew of chemtech researchers and a crowd of chem-merchants. A merry crowd of Zaunites from the theater district steps aboard.

"Down we go!" she says, ringing her bell, and the Howl responds with a whir. The descender sinks and the windows mist as vapor pours from pipes above. Beads of water spread across my metallic chest as the harmony of clanking machinery and whooshing steam begins anew.

A discordant murmur interrupts the pattern of sounds. The vibration is subtle, but I can tell something is off. The descender continues as if all was normal, until a jarring clunk breaks its perfect rhythm.

Though I have never dreamed, I know a break in the pattern this abrupt is a machine's most frightening nightmare.

The spiraling gearway is jammed, and the cabin's iron brackets grate against it with a horrible screech. Many lives are at stake and I feel the machine's pain as it braces desperately against the support beams. The entire weight of the Howl heaves against its bending columns and the cabin tilts at a lurching angle. Rivets burst from their seams as metal is pulled away from itself.

We wobble for a moment, then drop.

Inside the cabin, passengers scream and grasp at the nearest railing as they plunge. This is a different kind of howl.

I tighten my hold on the cabin's bottommost platform. I extend my other

arm, launching it toward one of the three vertical structural beams. The iron column is slippery in the mist and my grip misses it by inches. I retract my arm and steam blasts from my back as I try again, whizzing it toward a second beam. Another miss.

Time slows. Inside the cabin, the chem-punks cling to a ledge while the viridian beetle flies out an open window. The sump-scrapper and his child brace themselves against the glass, which fractures under their weight. The boy tumbles out, scrabbling at the frame with his fingers before he slips and falls.

I reach up and catch the boy in mid-flight, then retract my arm.

The child clings to the plates on my back.

I fire my arm up toward the support beam once more, and this time my hand meets solid metal with a resounding clang as I secure my hold. My other arm is forced to extend as it's wrenched down by the plunging cabin, so much that I feel my joints might fracture. Suspended in midair, I try to steady my grip.

With a great jolt, my arm jerks as the descender halts its freefall. It shakes from the sudden stop, now supported only by my arm. The boy shudders as he tightens his grip on my back.

The Howl is still fifty feet above the ground, hovering over the Sump-level buildings. My overlapping metal plates groan as they strain against the weight and I concentrate all my efforts on holding myself together. If I fall, the Howl falls with me, along with all its passengers.

While locking my arm onto the support beam, I slide my arm down the pillar. We drop ten feet and the cabin sways precariously before stabilizing again.

"Sorry about that!" I shout. Statements of empathy can be reassuring to humans in moments of crisis.

I must try again. I must be strong.

I release my grip on the support column ever so slightly, and with a piercing screech we gently slide down the remaining forty feet to the ground. My valves sigh as they contract.

Passengers echo my sighs as they stumble through the doors and broken windows into the Sump level, leaning on each other for support.

The boy on my back breathes rapidly as he holds my neck. My arms whir as I retract them and lower myself to the floor, crouching down so the child can touch the ground. He scrambles back to his father, who embraces him.

The conductor emerges from the descender and looks at me.

"You saved us. All of us", she says, her voice shaking from what I think is shock. "Thank you."

"I am simply fulfilling my purpose", I say. "I am glad you are not hurt. Have a good day."

She smiles, then turns to direct the crowd of Zaunites who have gathered to offer their assistance to the passengers and begin repairs. One of the chem-punk girls carries the musician's chittarone for him as he crawls from the descender. Several of the theater-folk comfort an elderly man.

Two Hex-mechanics stumble toward me and I direct them to a medical officer who is setting up a tented repair station. The murmurs of the passengers and the hissing groans of the wounded descender blend with the whirs and churning of the Sump. The steam-engine within my chest murmurs along, and I am moved to whistle a tune.

The boy turns and waves shyly at me.

He runs to catch up with his father, his heavy boots tapping a rhythm on the cobblestones. Shifting wheels sing and gears click-clack within the belly of the Rising Howl. The viridian beetle snaps her pincers in time with the beat as she zooms away into the Sump.

Lore and Events
Deutsch
Community content is available under CC-BY-SA unless otherwise noted.