The Emperor's Deck is a special pre-constructed deck in

Legends of Runeterra made up of powerful non-collectible cards. It has 9 different cards, and 15 cards total.

The deck can only be created by

Leveling Up to Level 3, functionally removing all of the cards of the allied deck, and replacing them with the preset 15 cards, with

10 Ascended's Call always at the bottom. 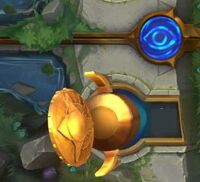