The Elnüks are large shaggy buffalo like quadrupedal mammalian herbivores.[2] They are unique to the lands of the Freljord.

They have thick fur coats that can come in various shades of brown and white. These coats are sheared and woven into warm clothing and other textiles by the Freljordians. They are also used for riding. Young Elnük have small fuzzy coats and the beginnings of what would later be their horns and tusks when they reach adulthood. Adult Male Elnük, or bulls, have large swirling horns and curved tusks, while adult female Elnük only have tusks.

Elnüks usually live in large groups known as troops. Shepherds herd their troop to graze on the slopes during the hotter seasons. Beside their thick coats, the Elnüks are usually a primary source of meat as well as the main currency of many tribes. 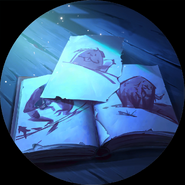