We're about to send League's next champion out to PBE!

Ekko's a powerful skirmishing assassin who thrives in extended fights, using his

mobility and crowd control to

stun enemies as he whittles down his targets. And if he starts to lose a fight, the brilliant boy from Zaun can

Ekko's damaging spells and attacks build up Resonance stacks on his enemies. Every third attack against the same target triggers Ekko's passive, dealing bonus damage and

slowing his enemy. If he triggers his passive on an enemy champion, Ekko also gains a strong

Ekko throws a device in a target direction, damaging all enemies along its path. Once it reaches max distance or hits an enemy champion, the device expands, creating a field that

slows all enemy and neutral units. After a moment, the device contracts and rushes back to Ekko, dealing extra damage to all enemies in its path.

Ekko dashes a fixed distance towards a target area. Once his initial dash has ended, Ekko gains greatly increased range on his next basic attack, and blinks to his target to deal damage and apply on-hit and spell effects.

Ekko rewinds time, briefly turning untargetable and invulnerable before reappearing wherever he was a few seconds ago. Once he reappears, Ekko recovers a portion of the health he lost over those few seconds while dealing tons of damage to all nearby enemies. 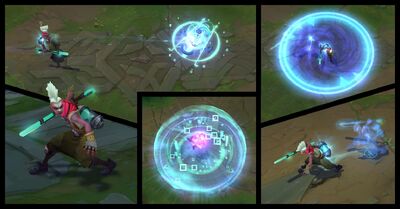 Timewinder. Its decent range and sheer size makes it a powerful zoning and

passive generation tool, although if Ekko isn't judicious with his casts, he'll quickly run both out of mana and into trouble. Aside from farming, Ekko's

Timewinder also provides poke against his lane opponent, particularly when he

Phase Dives, repositioning himself to strike his target with both rounds of

Timewinder. Smart positioning should gift Ekko with a perfect window to hustle in with

Phase Dive's blink and pressure his target with mounting

Z-Drive Resonance stacks. And, after diving on top of his opponent and triggering his

passive, Ekko can simply run out, making the most of his

speed boost as he heads to safety.

Ekko's role as a solo lane skirmisher becomes increasingly apparent as he starts leveling up and unlocking his full repertoire of abilities. Accurate

Timewinder - give him great trading windows: landing it on his lane opponent gives Ekko the chance to

phase in and trigger

Parallel Convergence's stun for a couple of free attacks. Even if his target avoids the crowd control, they'll still have a hard time successfully trading thanks to

Once his opponents see potential power of the ability, Ekko can get psychological, using his

Parallel Convergence casts to zone his enemies away from last hitting or force them towards an approaching jungler. He can even wrangle a couple of defensive uses out of

Parallel Convergence, like triggering the ability's explosion just so he can shield himself from otherwise lethal damage, or casting the ability directly on himself as enemy junglers come in to gank. This forces his would-be killers to choose between backing off, and stunning themselves within arm's reach of the boy from Zaun.

Ekko's skirmishing and trading turns stronger still after he unlocks

Chronobreak, gifting him the chance to heal up and try again after unfavorable trades, or use the ability to blink inside

Chronobreak comes packed with plenty of utility, too - if he's nimble enough, Ekko can simply hit his

Chronobreak to escape from deadly gank situations, or just return to lane if he's a speedy shopper after

Ekko lacks the raw power to burst his targets down, so he relies more on his cunning than his strength. As the two teams start gathering, he needs to look for opportunities to skirmish, harassing and chipping away at his targets from relative safety.

Timewinder's an important component here, offering Ekko his best method for developing his

Z-Drive Resonance stacks as his enemies group. All the same, he has to be careful to avoid being poked out himself or caught by enemy crowd control abilities - as slippery as Ekko is, he's not a resilient champ, and will quickly bite the dust once caught. But if a pick opportunity presents itself - if an enemy is already wounded or they're far enough away from their disruptive allies - then Ekko has all the tools, gadgets and gizmos he needs to get in, secure the kill and fall back in relative safety. Here's where

By placing the ability's sphere between his target and their allies, Ekko effectively zones them, forcing them to either move farther from safety, or willingly enter into Ekko's trap. Either way, an accurate

Phase Dive in and start bludgeoning his target. Once he's reduced their health enough, Ekko's damage amps up pretty significantly thanks to

Parallel Convergence's passive, making low health enemies especially enticing. And once he's done his work, he needs to quickly make his way to safety; if he's up past his neck in trouble, he can push his big red button and

Chronobreak to reappear with his team.

Ekko takes on a different role in large-scale teamfights, thriving in situations when he can follow up on high-impact area of effect abilities. After setting up his team's initiation with

Timewinder, Ekko follows up with

Phase Diving into his sphere to stun his enemies and shield his butt before he starts swinging his club. Then it's a matter of timing: Ekko needs to carefully balance the level of his health against the impact of his

Chronobreak too early and he'll end up back in his own team's backline; too late and he'll already have met his maker. But when Ekko

Chronobreaks correctly, when he reappears in the heart of the enemy team with topped up health and a devastating amount of area of effect damage, then his team all but wins the fight.

In his lore, Ekko's a smart guy who uses his wits to survive the streets of Zaun. I wanted to reflect that in his gameplay by making him feel wily and clever, so I asked myself how we could make an assassin who doubles down on feeling smart. We already have a bunch of ways for players to feel skilled in League:

Ezreal players feel skillful when they land their skillshots, while

Janna players might feel skillful when they combo their abilities together in the right way to save their carry. Getting players to feel smart, on the other hand, is a trickier beast. Here's a contrast:

Zed players are skillful when they position correctly, engage on their targets and land all their abilities.

shadow they left behind at just the right moment. The core thing here is feeling like you came out ahead in an engagement through solid situational analysis instead of raw mechanics and reaction time.

Now for Ekko. He feels smart through the idea of predictive gameplay. Basically, instead of reacting to what happens, I wanted you to feel good about predicting what will happen - call the shot right and you get a reward. This is best represented in Ekko's

Parallel Convergence. The ability asks him to take in his current surroundings and make a call as to where he will need to be in three seconds. If he does it right, he gets a shield, but if he does it extra right by also calling out where his enemy is going to be, he gets to stun them. The time between cast and detonation starts a game where Ekko and his team need to move in just the right way to ensure everyone goes where he wants them to.

Timewinder is similar. At one point Ekko was able to call the

Q back manually at any time during the cast, but while this made the ability feel more mechanically complex, it made Ekko's use of it less smart. There was no longer a contextual problem to solve, and the use case just became a flat yes/no question. Will the orb hit them? If yes, recall it. Without the mechanical complexity, Ekko has to plan how he'll use his

Q, and reposition himself so that both damage rounds land against his target. It's smarter.

A second 'smart gameplay' idea we wanted to implement in Ekko's kit was abilities that have a basic functionality, but which can also be used perfectly for much greater effect. Ekko's

Parallel Convergence again fits in here. It creates a reasonably large area that enemies don't want to be in, so at its base level, it works as a zoning tool. Similarly, Ekko can cast the ability on himself for a shield - another base level use for the ability. But in order to land the stun, he needs to figure out how he or his allies can lock his target down and keep them in the zone. Analyze or force the situation correctly by orchestrating your enemies and allies into the sphere, and you win the teamfight.

The second question we explored on Ekko was figuring out how we could make an assassin feel good when they're not one-shot killing targets? We already have kill assassins (

LeBlanc, for instance), so we came up with the idea of a utility assassin. Ekko, like

Ashe, has lower ratios and so takes longer to secure kills than most in his role. But where he loses damage, he gains large amounts of CC that he can use to win teamfights even when he isn't the main damage threat. Basically, if

Anivia - he doesn't provide much else to his team. But if

Anivia, he can at least try to lock her (and maybe her team) down so people like

Jinx can clean up. Thanks to

Finally, you might be wondering why you'd want to pick an assassin who can't kill people. That's actually untrue - if any squishies on the enemy team get low Ekko can and will find and kill them thanks to the assassin threats that Ekko does retain, specifically his ability to select single targets with

Phase Dive before using the execute damage on

Parallel Convergence to kill them.

Ashe is still a marksman, and Ekko's still an assassin - they're just a little different.

Ekko Chronobreak VFX - Behind the Scenes

Behind the Scenes Giving True Damage Ekko a Voice

Retrieved from "https://leagueoflegends.fandom.com/wiki/Ekko/Development?oldid=3090060"
Community content is available under CC-BY-SA unless otherwise noted.