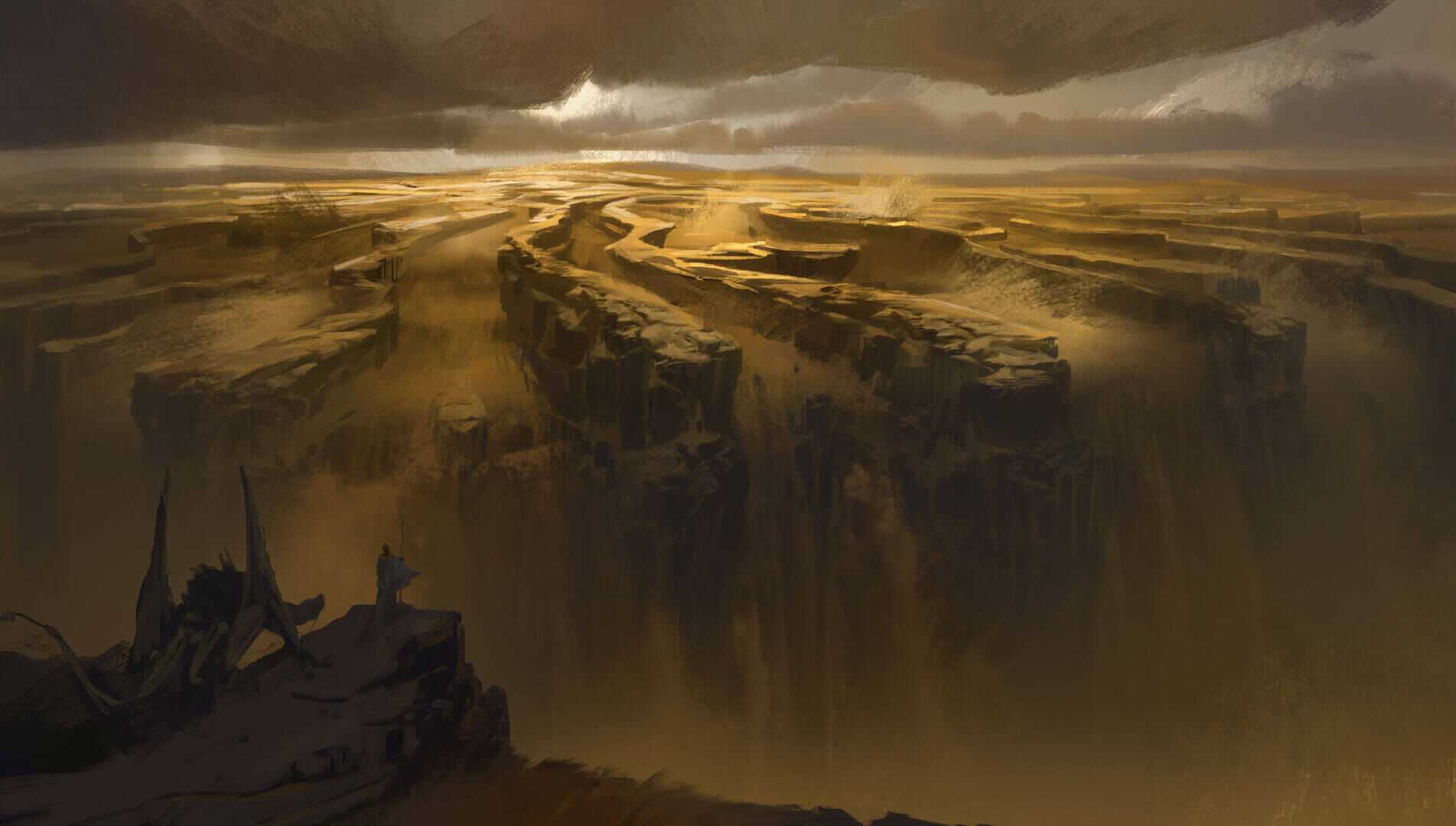 outrunning the sandstorm when she first noticed the water. In the beginning, it was faint, just a cool dampness she felt as she lifted the stones from deep beneath the sand. As she drew closer to old Shurima, wet streaks dripped from each new stone as if they were weeping. Taliyah knew the rock had stories to tell as she sped across the desert, but she didn't have time to listen, to hear if they were tears of joy or sadness.

Sun Disc, water from underground aquifers began to pour off the stone she

rode like little rivers. And when she finally arrived at the gates, Taliyah heard the deafening water rushing along the bedrock. The Oasis of the Dawn, the Mother of Life, roared beneath the sands.

The people of her tribe had followed the seasonal waters for hundreds of years. The best chance of finding her family was to follow the water, and to Taliyah's dismay, the water in Shurima now flowed from a single source as it had in ages past. The tragic remains of the capital city had always been avoided, almost as much as the great Sai and deadly creatures that hunted there. Even thieves knew to keep their distance from the city. Until now.

Taliyah brought the rock she rode to a sudden halt, nearly stumbling from it as she pushed the stone quickly below the desert's surface. She looked around.

The woman from Vekaura had been right. This place was no longer a forgotten ruin, haunted by ghosts and sand; indeed, the makeshift camp just outside the walls scrambled with life, like an anthill before a flood. Not knowing who these people were, she decided it might be best to reveal no more than was necessary.

It seemed there was tribal representation from all four corners of her homeland, but as Taliyah searched their faces, she saw none that were familiar. The people here were torn. They argued about the merits of staying in their temporary camps versus seeking shelter within the city. Some worried that just as it rose, the city would fall again, burying any caught inside. Some saw the storm that bristled with unnatural lightning and thought their chances were better within the walls, even if the walls had once been lost to the sand for generations. All of them moved quickly, packing haphazardly and worriedly glancing at the sky. Taliyah herself had won the race with the tempest, but it wouldn't be long before the sand lashed against the gates.

"Now's the time to decide." A woman called out to her, her voice almost lost to the noise of the churning oasis waters and the rising storm. "Are you going in or leaving, girl?"

Taliyah turned to face the woman. She was Shuriman, but other than that, unknown to her.

"I'm looking for my family." Taliyah gestured to her tunic. "They're weavers."

Hawk-father has promised protection to all those within the walls", the woman said.

The woman looked at Taliyah's concerned face and smiled, taking her hand. "Azir has returned to us Ascended. The Oasis of the Dawn flows again. A new day has come for Shurima."

Taliyah looked around at the people. It was true. They were hesitant to move far into the massive capital, but the fear that worried their faces was more for the unnatural storm than the city or its returned emperor.

The woman continued, "There were weavers here this morning. They decided to wait out the storm inside." The woman pointed to the throngs of people pushing in toward the newly beating heart of Shurima. "We must hurry. They are closing the gates."

Taliyah found herself being pulled toward one of the capital's great gates by the woman, and driven from behind by a crowd of strangers who had decided at the last minute not to brave the sands by themselves. Still, there were a few groups clustered near their circled beasts, determined to face the storm as Shuriman caravans had for generations. In the distance, strange and threatening bolts of lightning crackled at the edge of the whirlwind. Old Shuriman traditions might not survive the storm's passing.

Taliyah and the woman were pushed across the golden threshold that separated Shurima from the desert surrounding it. The heavy gates swung closed behind them with a resounding thud. The immensity of old Shurima's glory stretched out before them. The crowd hugged the thick, protective walls, unsure where to go. It was as if they sensed the empty streets belonged to someone else.

"I'm sure your people are somewhere within the city. Most have kept close to the gates. Few are brave enough to go farther than that. I hope you find what you are looking for." The woman let go of Taliyah's hand and smiled. "Water and shade to you, sister."

"Water and shade to you." Taliyah's voice dropped off as the woman disappeared into the milling crowd.

The city that had been quiet for millennia now pulsed with life. Silently watching over Shurima's newest denizens were helmeted

desert cloaks in gold and crimson. Though there was no trouble, Taliyah continued to feel there was something not right about this place.

Taliyah reached out to the thick wall to steady herself. She gasped. The stone throbbed beneath the flat of her palm. Pain. A terrible, blinding pain overwhelmed her. Tens of thousands of voices were etched into the rock. The fear and torment of their last moments, before their lives were cut down and their shadows were seared into the stone, screamed in her mind. Taliyah tore her hand from the stone wall and stumbled. She had felt vibrations in stone before, reverberations of memories long since past, but never like this. The knowledge of what had come before felled her. Wild eyed, she stood and stared, seeing the city anew. Revulsion washed over her. This wasn't a city reborn. It was an empty tomb risen from the sand. The last time Azir had made promises to the people of Shurima, it had cost them their lives.

"I must find my family", she whispered.

Lore and Events
Retrieved from "https://leagueoflegends.fandom.com/wiki/Echoes_in_the_Stone?oldid=3088655"
Community content is available under CC-BY-SA unless otherwise noted.