visible to enemies for at least 1 second, your next basic attack against an enemy champion deals 30 − 150 (based on level) bonus physical damage on-hit and, after a 0.25-second delay,

slows them by 99% for 0.5 seconds. The enhanced attack lasts 5 seconds after being seen by an enemy champion.

Ranged basic attacks do not apply the slow. 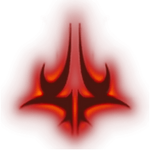 Retrieved from "https://leagueoflegends.fandom.com/wiki/Duskblade_of_Draktharr?oldid=3108451"
Community content is available under CC-BY-SA unless otherwise noted.