Dreadknights is a series of alternate future/universe skins in League of Legends. Set in alternate Freljord, it features champions as part of an undead knight order. 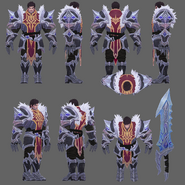