Drake-Hounds are a species of wingless, wolf-sized carnivores that lair in the mountains to the north of Noxus Prime.

They are a distant relative of dragons and vicious pack hunters, and much favored in Noxus as war-beasts, guard creatures, herding animals, and expensive (albeit dangerous) pets. To own one or more drake-hounds is a visible symbol of wealth and power. They are a prized gift to the tribal chiefs of the Dalamor Plains. 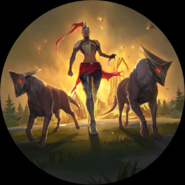 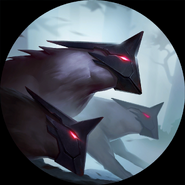 Hunt the Weak "Legends of Runeterra" Illustration (by Kudos Productions)