Twice did dragonfire consume the world. Twice from the embers were heroes. 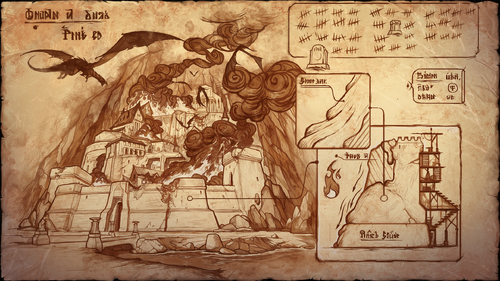 They arrived at sundown. Five of them. The attack was methodical, brutal. The keep's defenses were useless. For an hour, the sky rained fire.

There aren't enough survivors to tally our losses.

Before we fled, I examined a section of the south wall, liquefied by the dragon's breath. No stone could have withstood that heat. Could anything?

I had never witnessed a dragon before today. Now, I see nothing else. 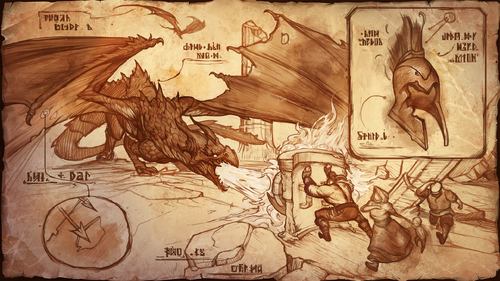 The dragons didn't want the city. They wanted us.

We fled through the melted stonework, but an old one hunted us. When all seemed lost, two extraordinary men came to our defense. Their valor bought us time to escape, but even they could not leave unscathed.

If men like these cannot defeat these beasts, we are truly lost. 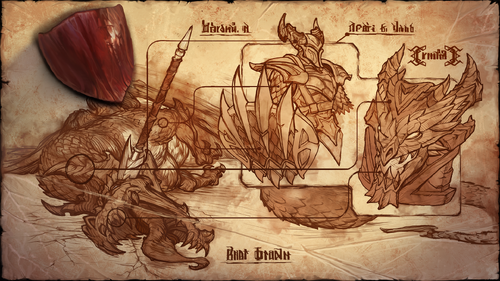 The dragon tracked us down.

This time, the heroes were prepared. One distracted the beast while the other waited high above. From a cliff's edge, he dove upon the creature. His spear was true.

We studied the thing hoping to find a weakness. Instead, we took its strength. The scales are more resilient than any material I have ever known. They remain cool even when put directly to the flame.

With its hide, I will armor our heroes.

We may now stand a chance, but to wage a war, we will need more scales. And those with the courage to wear them.

Rise of the Dragons 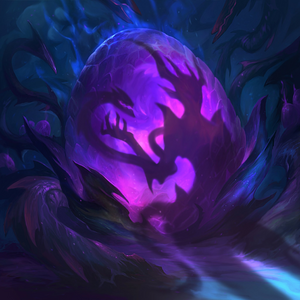 THE FIRST SIGNS WERE SMALL.

A few sheep disappeared; a mountain hermit found dead, his shack burned to the ground.

Then the survivors arrived, carrying what little they had left. They told stories of serpents in the sky and a powerful Sorceress nested deep in the mountains.

The dragons rose again, and the dragonslayers returned once more to the field.

They fought as bravely as before, but this time the dragons never stopped coming.[2]

Rise of the Dragons Dragonslayer 2017 Skins Trailer - League of Legends

Eye of the Dragon