4%) of their maximum health as total magic damage over 4 seconds. 」「 (

1%) of their maximum health as magic damage every second over 4 seconds. 」

Demonic Embrace is a legendary item in

Gold Value per 1 bonus health from outside sources 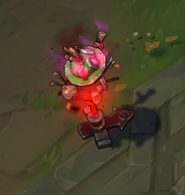