Demacian Walls are the nationwide system of wall fortifications built to defend Demacia's borders. It secures key border points that are most likely to be attacked by outside forces. 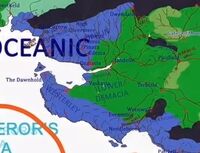