Definitely Not Dominion is a featured game mode developed from the retired assets of Dominion after its removal.

On May 27, 2016, it was added to the list of Rotating Game Modes. It is exclusive to the Crystal Scar.

Definitely Not Dominion is a capture-and-hold game mode where two teams of five players compete on the Crystal Scar Field of Justice to destroy the enemy nexus. The nexus is untargetable and has 500 life points. These life points can only be diminished by controlling more capture points than the enemy team or securing enemy kills: the more points you control, the faster life points are lost by the enemy nexus. When both teams have the same amount of capture points, neither nexus will be damaged. Killing an enemy champion reduces their nexus' HP by 2. The nexus' HP will stop depleting life by champion kills once it reaches 100 HP to avoid victory by "ninja capping" (capturing points just to deplete the health of the nexus instantly) or by "winning kill" (associating victory by finishing off enemy champions).

The first team to deal 500 damage to enemy nexus:

Players will have the Seer Stone trinket at the start of the game.

There are 3 capture points instead of 5 in Definitely Not Dominion, which start out as neutral points on the map that players must capture. The capture points must be captured by right-clicking on the capture points' tower. Once the player's Champion is within range of the tower, he/she will begin channeling for a set amount of time to capture the control point. The more Champions that are channeling, the faster the control point is captured. When a point has already been captured by an opposing team you will need to channel twice: once to make it neutral and once more to capture it for your team. Capture points will slowly return to a neutral state if they are not controlled by a team.

Minions spawn from ONLY the bottom 2 points, and walk clockwise or anti-clockwise respectively around the map, this means each team will ALWAYS hold at least 1 point for minion spawning. If they capture a point, they will KEEP ON GOING to the next point. If the capture point is not captured, minions will contribute to their team's capturing of the point. 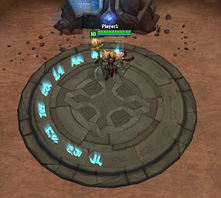 The center Storm Runes have been replaced with an altar that players can capture to gain the temporary Nimbus Storm buff, which grants 3 charges. Hitting an enemy champion spends a charge, dealing 4 / 5 / 6% of target's maximum health true damage to the main target and 2 / 2.5 / 3% of target's maximum health true damage to up to 3 other targets. While controlling the altar, all allied team members also generate a free charge of the Storm Nimbus every 4 seconds while in combat.

Both team have vision of the buff area. 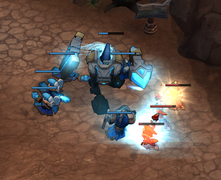 Near the sealed bottom 2 points are 2 Ultra Minion Relics, 1 owned by each team. Capturing the enemy team's Ultra Minion Relic will summon an Ultra Minion for your team in the next minion wave. These are serious minions. They capture WAY faster than any 1 champion, deal out punishment and are extremely tanky.

It takes 4 seconds to fully capture the relic solo.

There are four speed relics in the map. Two relics are between the left and right most capture points. There are one relic between the Ultra Minion Relic and the Storm Altar on each side.

There are five health relics. Four are between the capture points. One are just above the middle capturing point.