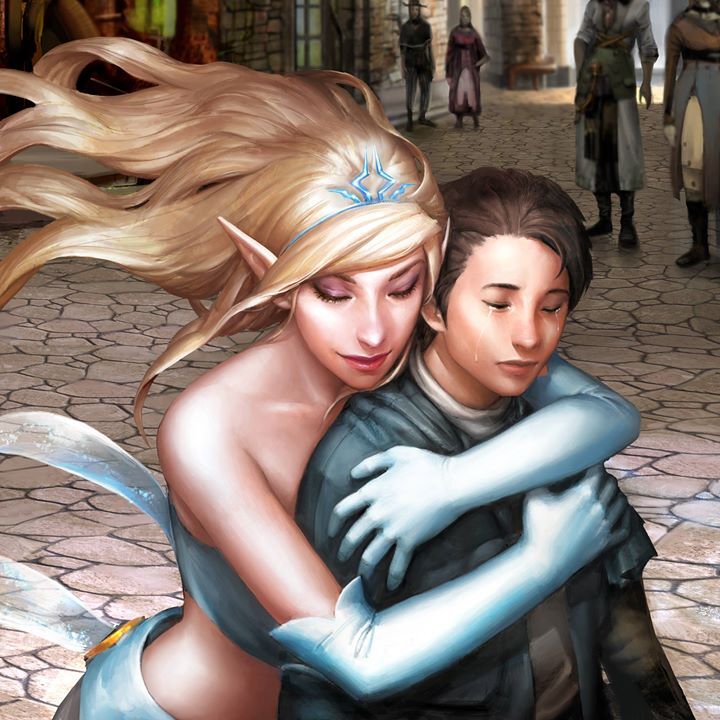 They won't admit it, of course - they'll smile through their teeth and pat us on the back and tell us that Piltover would be nowhere without Zaun. Our hard workers! Our bustling trade! Our chemtech that everyone in Piltover pretends they don't buy, except they constantly do! Zaun is a vital part of Piltover's culture, they'll say.

They think Zaun is where the idiots go. People too stupid to make it in Piltover's golden towers.

I spent months dealing shimmer so I could afford to apply for Clan Holloran's apprenticeship. I studied every crusty, dog-eared book I could find on gearwork machinery. I built a prototype gearbrace for people with broken or arthritic wrists that increased their mobility. I did everything I could have done to earn an apprenticeship in Piltover. I even made it to the final stage of the vetting process: a face-to-face meeting with Boswell Holloran himself.

They said it was a formality. Just a way to welcome me to the family.

He entered the room, looked down at my Gray-stained clothes, and laughed a strangled, joyless laugh. He said "Sorry, my boy - we don't take sump-rats here."

He never even sat down.

So now I'm back here. In Zaun. One more idiot.

The Gray rolls through the streets, welcoming me back. Most days, it's thin enough that you can breathe deep without coughing up something wet. Today, though, is what we call a Grayout. You choke with every breath. Your chest feels tight. Can't see much past your fingertips. I want to run, but I know there's nowhere to run to. The Gray feels like it's closing in on me, crushing me, smothering me.

These are the times I pray to

Not everyone in Zaun believes she's real, but my mother always had faith. She told me a

bluebird hovered outside her window on the day of my birth, and she knew - she knew - it was Janna telling her I was going to be fine.

She was wrong, of course. I wasn't fine, in the end. Couple of years ago, she - my mother - died while sump-scrapping, and I had to raise myself with the few gears she left me. Then, the usual: couldn't make friends. Got beaten up a lot. Boy I loved didn't love me back. Tried to study, tried to think my way up to Piltover. Couldn't. Figured Janna had forgotten about me.

But I still keep the pendant my mother gave me: a wooden engraving depicting the bluebird she saw. Just in case of moments like these.

So I sit on the wet ground because I don't care enough to find a bench, and I take out the bluebird pendant I always keep tucked in my shirt, and I talk to Janna.

Not out loud, of course - don't need people thinking I'm some chem-burnt freak - but still, I talk to her.

I don't ask her for anything. I just tell her about my day, and the day before that, and how scared I am that I'll never become anything worthwhile and that I'll die down here knee-deep in the Sump with nothing to show for it just like my mother, and that sometimes I just want to run away somewhere I can breathe and stop being so frightened and not feel like crying all the time and how I hate myself for feeling like I want to cry because I have it so much easier than some other people, and how sometimes I think about throwing myself into the chem pools of the Sump, just throwing myself in with my mother where I'd let myself sink to the bottom and my lungs would fill with fluid because then it'd be over, at least. I tell Janna I hope she's okay. I hope she's happy, wherever she is.

That's when I feel the breeze caress my cheek. Just a light flutter, but it's there. Soon, I can feel it blow hair across my face. The wind whistles loud and fast, and soon it's whipping my coat in the air and I feel as though I'm at the center of a maelstrom.

The Gray swirls before me, pushed up by a breeze that seems to flow from everywhere at once. The fog slowly dissipates, and I can see other passersby on the Entresol level watching it float away.

Not just small, cautious gasps, but deep breaths that fill my lungs with cold, fresh air. No longer veiled in Gray, the sun shines past the towers of Piltover into Zaun itself.

I can see the Piltovans above, peering down at us. Without the Gray clouding their view, they can see us from their lofty bridges and balconies. I don't think they like it very much. Nobody wants to be reminded they live above a slum; I see a few scowls.

That's when I see him again: Boswell Holloran. Holding a sweetcake in his hand, looking down at me again. An expression of disgust on his face, just like before.

I'm so busy staring at his contemptuous face that I don't notice the presence behind me until her hand is on my shoulder.

"It's okay", she says, and I know without turning who it is.

She squeezes my shoulder, then kneels and crosses her arms in front of my chest, pulling me into a hug.

Strands of her hair fall onto my shoulders. She smells like the air after a long rain.

"It might not be okay now. You might not be okay for a while. And that's fine. But someday, without knowing exactly when or why or how it happened, you'll feel happy", she says. My face is warm and wet and I don't know when I started crying but it's a relief, like the clouds are clearing, and I hold her arms and she holds me, just telling me over and over that it's okay, that she's here, that things will be better.

I don't know how long she holds me, but soon I see everyone on Zaun's Entresol and the balconies of Piltover above are staring.

Before I can say anything, she says, "Don't think about them. Just take care of yourself. Will you do that for me?"

I try to speak, but instead I just nod.

"Thank you", she says, and she kisses my wet cheek and gives me one last, quick squeeze.

She rises and glides past me. For the first time, I see her in her entirety - a tall, ethereal figure that I would've assumed was from my imagination if she hadn't just touched me. I notice her long, pointed ears. Feet that don't touch the ground. Hair flowing in the wind, even right now when there isn't any. Eyes so blue I feel a little cold just looking at her.

But then she smiles, winks, and says, "You'll want to watch this next part."

There's a massive gust of wind, so fast and sharp I have to cover my eyes. When I open them again she's gone, but the wind is still blowing. It blows up toward Piltover and its gawking citizens.

It whistles as it picks up speed and strength, and the Pilties run for cover but it's too late, the breeze hits them full force, sending their frocks sailing and mussing their hair. Boswell Holloran shrieks in terror as the wind launches him off the balcony.

It seems as if he's about to plummet toward certain death, but another gust of wind shoots up toward him, and his descent slows significantly, as if the wind is guiding him down. You wouldn't know it to look at him, though. Even though he's falling with all the velocity of a tumbling leaf, he screams the entire way down. Very high pitched. Very undignified.

His clothes flap upward, smacking him in the face as he descends, until he's hovering a few inches above a puddle.

"I --- ", he begins, before the wind disappears altogether and he plops ass-first into the puddle, ruining what I assume was a very expensive ensemble. He yelps in a mixture of surprise, pain, and irritation, splashing around like an angry child. He tries to get to his feet, only to slip and fall back down all over again. If I'm being completely honest, he looks like an idiot.

And I can't stop laughing.

Lore and Events
Retrieved from "https://leagueoflegends.fandom.com/wiki/Deep_Breath?oldid=3088648"
Community content is available under CC-BY-SA unless otherwise noted.