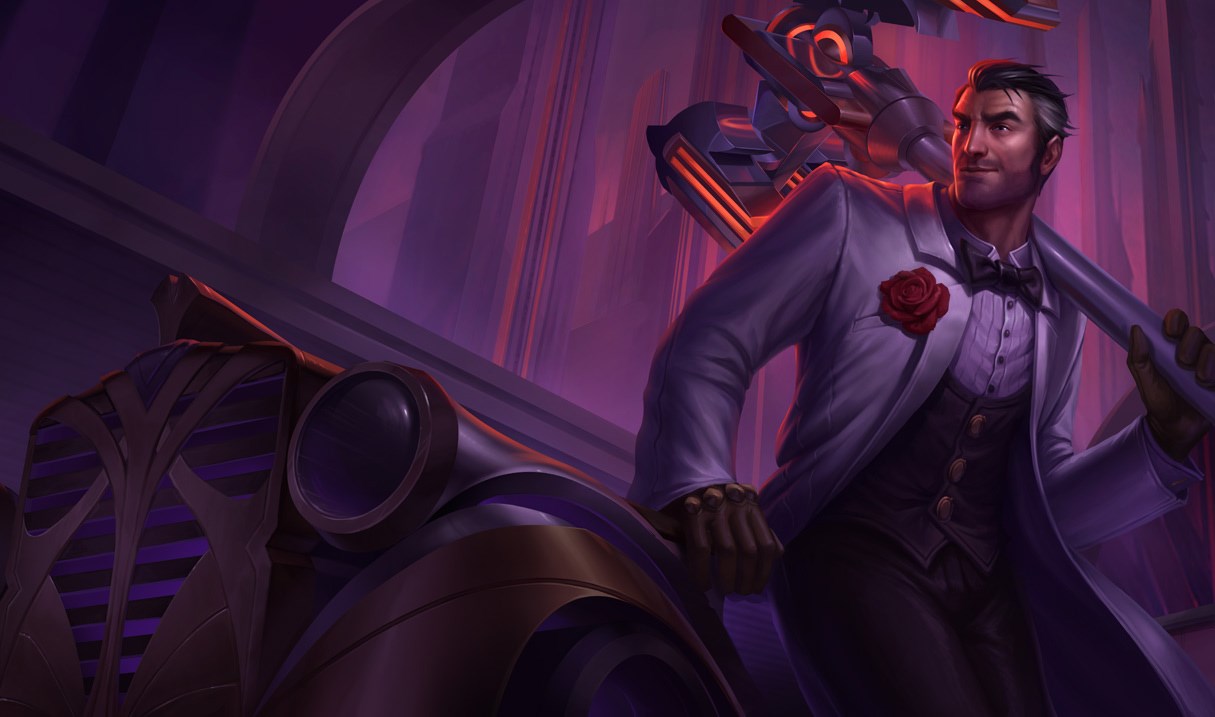 Debonair is a series of alternate future/universe skins in League of Legends. Set in an alternate Piltover, each champion is a well dressed gentleman/lady.

From The Defender of Tomorrow in the Fashion of Today, exclusive to IM

“The room smells of mahogany and warm brandy, and I can tell by the leopard-skin hearthrug that the man I’ve come to interview is well-accustomed to company. They’re finishing the shoot in the foyer where Jayce, the Defender of Tomorrow, has suited up in the high fashion of today. In the meantime, I have free reign of the illustrious inventor’s sitting-room and I’m staring at the newest model of the world-famous Mercury Cannon-Hammer.

Slim and trim, and as stylish as the room I’m standing in, this iteration of Jayce’s signature weapon has refined lines and looks as clean as Piltover’s finests’ sterilized holding cells – not that I’ve seen them, of course. When we met last night, Jayce told me with his trademark wit about the new effects that issue from the cannon’s powerful blasts.

The door swings open and dapper Jayce strides with the effortless grace of someone who has more awards than bottles of wine despite a cellar the size of an Ionian temple. Dressed to the skies with a white overcoat and charming rose boutonniere, Jayce has picked up a confident swagger and a noticeable change in his voice…”

Dressed to the skies with a white overcoat and classy boutonniere, sleek and stylish

Debonair Jayce is ready for Valentine’s Day for 975 RP in the store.

Debonair Vi and Ezreal have arrived

Take your enemy’s breath away with style, or if that fails, a sharp punch to the solar plexus. High-end fashion has made its way to the Rift with Debonair Vi and Ezreal. Tailored suits, fitted vests and elegant gauntlets let everyone know that the difference between you and them is simple: You make this look good.

"His calculations are so precise, Vel’Koz asks him for help with geometry.

His singing in the shower is so breathtaking, it stole Sona’s voice.

He once stepped on a mushroom and Teemo exploded.

The Most Interesting Gargoyle-like Construct in the World.

A crime wave threatens to drown Piltover and only two cops have what it takes to stem the rising tide of lawlessness. We teamed up with Risu to bring you all the punching and plants you could ever want, as Officers Vi and Zyra try to foil the Mafia’s sword-stealing schemes and bring peace to the city![2]