If you've ever been frustrated by your progress in a given position, you might want to look to

Darius, the Hand of Noxus, for inspiration. In order to secure his own advancement, this determined champion has repeatedly employed the foolproof method of

lopping his boss' head off. So whether you believe that the road to power is paved with the headless bodies of your enemies, or you simply think that a good beheading is a rather expedient method of dealing with red tape, we think you'll agree that Darius makes a fine addition to the League of Legends. 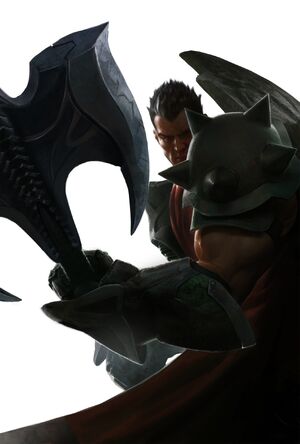 Darius, the Hand of Noxus, Revealed

If you're fond of cutting a swath through your enemies on the way to scoring that epic killing blow, look no further than

Darius, the Hand of Noxus. This focused and deadly warrior specializes in focused attacks and attrition damage, closing out his assault with heavy damage

nukes. At the heart of Darius' kit is his passive ability:

Hemorrhage. Darius' basic attacks and damaging abilities all cause the target to bleed for additional damage over time. This effect can stack up to five times, also giving Darius some bonus Movement Speed for each enemy champion currently afflicted and granting his other abilities additional effects.

In team fights, Darius can start off by using

Decimate to quickly apply his bleed on a number of enemies. These

Hemorrhage debuffs will not only give him a hefty Movement Speed bonus, but also interact with his other abilities for added effect. To pursue a fleeing enemy, the added speed from his passive combines with

Crippling Strike, an attack that slows the opponent and refunds part of the cooldown for each stack of

Hemorrhage currently affecting the target. Even in the event an adversary should start to slip away, Darius can use

Apprehend to pull them back within reach.

Finally, to close out this relentless assault in an appropriately brutal manner, Darius can employ his ultimate ability

Noxian Guillotine. Leaping forward, Darius strikes a lethal blow that deals True Damage plus a hefty bonus for each stack of

Hemorrhage currently applied. Additionally, if Darius scores a killing blow in the process, the cooldown on

Noxian Guillotine is immediately refunded. This allows him to redouble and continue his bloody work on an additional opponent (or opponents, as the case may be) Watching this vicious champion dart through the fray, decapitating foe after foe in rapid succession can be a truly terrifying and epic sight!

Darius aims his attacks strategically, causing his target to bleed. This effect stacks up to five times.

Darius's next attack severs a crucial artery. As the target bleeds out, their movement and attack speed are

Darius hones his axe, granting him passive armor penetration. When activated, Darius sweeps up his enemies with his axe's hook and

pulls them to him.

Darius leaps to an enemy champion and strikes a lethal blow, dealing true damage. This damage is increased for each stack of

Hemorrhage on the target. If Noxian Guillotine is a killing blow, its cooldown is refreshed.

Darius as one of League's strongest cleanup fighters, the pentakill machine who'd outlast his enemies' attacks before

apprehending his wounded enemies and getting his chop on. The problem was, while that fantasy is great, Darius almost never got to do any of it. Either you'd build damage on him and die before it was cleanup time, or build tanky and lack the damage to properly get your

With this update, we're tweaking

Hemorrhage and giving the big guy's passive a new tool:

The idea here is to give Darius the means to be Darius. The damage amp upon fully stacking Bloodrage is huge, but he still has to work to get it. Opponents will have to be much more cautious about letting the Hand of Noxus get his passive stacks going - preventing him from gaining stacks means he won't go into Bloodrage which, in turn, means he'll have a much harder time chaining his executions together. But when he does… well… there will be pentakills.

Where Power Lies VS 2018 Legendary Skins Trailer - League of Legends

Tales of Runeterra Noxus “After Victory”

Crown of the Wolves

Retrieved from "https://leagueoflegends.fandom.com/wiki/Darius/Development?oldid=3064257"
Community content is available under CC-BY-SA unless otherwise noted.