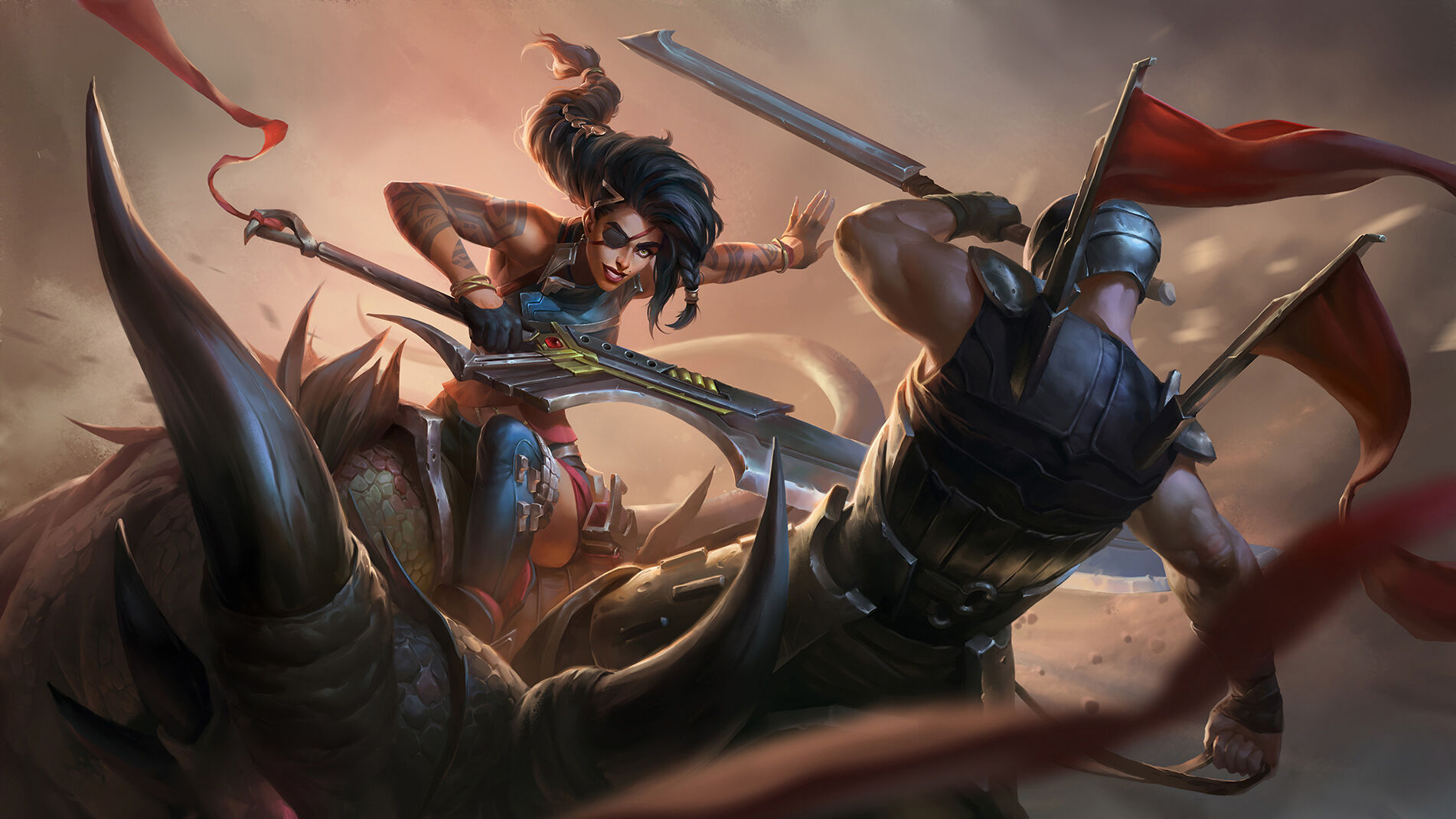 The weapons shop looked grimy—just the way Samira liked it. A sign hung askew on the door: Lani & Miel Munitions. Samira heard about this Noxian hole-in-the-wall from Captain Indari, who’d received a tip from one of her old saboteur connections. That and the fact the apprentices here moonlighted as tattoo artists was enough to intrigue Samira. She stepped in, and Indari followed.

The captain didn’t need to tag along, but it wasn’t like Samira could tell her otherwise.

Inside, Samira smelled molten iron and saw tools rarely found in Noxian armories. A chirpy woman with two labret piercings welded Zaunite brass while her partner, a woman built like an ox, cleaned a hexcarbine. Tattooed apprentices helped wherever they could.

“How much coin you wasting today?” Indari asked, adjusting the hand rims of her wooden wheelchair. Her voice carried the strength of many decades in service to the empire. Years ago, her disapproval would’ve stung.

Now, annoying the captain was just a bonus.

“Not nearly as much as I’d like to.” Samira saw two pistols displayed in glass. One had the color of charcoal. The other was a revolver, sleek and silver. Both contained untested Zaunite innovations.

“These as easy on the hands as they are on the eyes?” Samira asked.

“They’re the best we got!” the welder shouted. “Miel and I made ’em with materials imported from back home—my home, that is. Will cost ya a fortune.”

Samira threw a sack of coins on a counter. Behind her, Indari crossed her arms. “That's the whole payout from your last mission!”

Samira smiled. “A woman’s gotta have the right equipment for the job. Besides, the last firearms I had… weren’t that exciting.”

Indari shook her head. “Sam. Even for you, this is reckless.”

The journey into the southern jungles took weeks, and to Samira’s disappointment, not even one person had tried to kill her. Standing near a large stone building, she double-checked the location the captain had marked on her journal—a compound near Qualthala rumored to house a weapon that threatened the empire. Orders were to retrieve the weapon and leave no survivors.

The building, devoid of markings, loomed before her, its wooden doors smashed to pieces.

She stepped forward, then stopped herself. Lifting up her right boot, she picked off a piece of warped iron stuck to the metal clasp. Strange, she thought, staring at its unnatural shape. Then came rushed footsteps.

“Another intruder!” one shouted. “Don’t let this one get away!”

My kind of welcoming party.

Samira drew her pistols. Sliding to her right, she unloaded a flurry of bullets, executing the guards before they were within spear’s length.

Samira’s brow furrowed. “Not much of a challenge, now, was it?” She pressed on, sprinting loudly past metal debris in the corridors of the compound, figuring this’d be the best way to attract everyone’s attention. Warmasons, alerted to the intrusion, ran toward her.

Round two. Let’s make this fun.

Out of the corner of her eye, she saw a table shoved against a wall. Samira rushed forward and jumped onto it. Leaping off the tabletop, she spun in a wild circle, mowing down her pursuers in a blaze of gunfire before her feet hit the ground.

Without rest, she hopped over a crushed balcony to land in an open courtyard. Nearby was another building, its doors smashed apart.

Someone must’ve beat me to this weapon, she thought, smirking. Been years since that’s happened.

Atop each was an armored soldier wielding a bladed axe. The hair on Samira’s arms rose in excitement.

“She here for the null kid, too?” one of the soldiers asked.

“Doesn’t matter, kid’s gone. And this one looks nothin’ like the earlier intruder,” said the second soldier, turning to Samira. “What are you?”

Samira raised an eyebrow. “What I am is the last thing you’ll see.”

A bullet tore into his head.

“What a shame,” Samira said, checking her revolver. “Wasted my last round on him.”

The soldier fell dead to the ground. His basilisk roared, charging headfirst toward Samira, its jaw snapping.

Samira crouched. She felt her heart race, but didn’t move a muscle.

Won’t be as thrilling until…

She reared back her arms and chucked her guns at its eyes, dazing the beast for a moment. Turning her back, she leapt into the air, flipping her body in a perfect backward circle before landing on the creature’s saddle. Pulling the reins taut, she jerked her mount to face the remaining soldier.

The soldier growled. “Rell send you to clean up the mess?”

“Nope, never heard of ’em. Noxus sent me,” Samira answered, enjoying her foe’s confusion. “Sometimes, I’m sent to save the strong. Other times,” her eyes locked with the soldier’s, “to cull the weak.”

Samira loosened her grip and whispered, “Go.” Her basilisk lurched forward to meet the other rider. He came at her with his axe held high, aiming for her neck.

Samira arched her back as her mount met his, dodging his slash and unsheathing her sword in one swift motion. With a crescent swing, she struck her blade at his stomach.

The soldier roared. “That won’t work on this armor!”

Samira pumped the slide barrel attached to the dull edge of her blade, and pulled the trigger. Black powder burst out behind her sword, forcing the blade forward to break open the soldier’s armor. With an excited yell, she split his torso apart before leaping off her mount to land on her feet, smoke billowing off her sword.

Both basilisks, now riderless, stood still. Samira cut their saddles off. As the beasts fled to their freedom, she kicked the dead bodies aside, retrieving her empty pistols.

On the other side of the courtyard, a crumbling stairway spiraled downward beyond the building’s smashed doors. Samira followed it to the remains of a stone prison cell, warped pieces of metal scattered everywhere. The front door was destroyed while the back wall was torn asunder, leaving a gaping hole that tunneled out into the jungle.

“What were they keeping in here?”

Samira walked around the space, examining the destruction. Split by jagged shards of metal was a small cot fit for a child. Shrugging, she took a seat, reached into her pocket, and pulled out a flask. With her boots resting on the wreckage, she leaned back and raised the flask high into the air.

Weeks later, Samira was back in the weapons shop. A skeptical Indari sat nearby as a burly male apprentice touched up Samira’s tattoos with bronze needles.

“Anything new today?” he asked.

“Nah. Not quite thrilling enough… But something dangerous is on the way, so leave some space.”

Indari rolled her eyes. “So. How were they?”

“Exquisite. I’ll be playing with these for a while.”

“Life’s full of surprises.” Samira placed a handful of coins on the counter before walking out. “Keep the missions coming, captain,” she said with a salute. “You know where to find me.”

Indari wheeled after her. “What do you mean, ‘I know where to find you’? Last time, you were jumping off some remote cliff in Shurima! My scouts nearly died trying to locate you!”

But Samira was already gone.

Frustrated, Indari returned to the shop. “One of these days,” she mumbled under her breath, “she’ll have to fend for herself.”

The tattoo artist, now without the guise of dark sorcery, walked out from the shadows to reveal a

woman’s shape, her face pale under the light.

“Captain Indari. You will give her whatever she wants—the empire needs Samira.”
▲ TOP ▲

Lore and Events
Retrieved from "https://leagueoflegends.fandom.com/wiki/Daredevil_Impulse?oldid=3165262"
Community content is available under CC-BY-SA unless otherwise noted.