Crystal Rose is a series of alternate future/universe skins in League of Legends. Set in a world where champions attend the annual Crystal Rose Festival to form alliances and negotiate truces.

In a world of frequently-broken magical alliances and centuries-old grudges, the annual Crystal Rose Festival offers a neutral ground for the powerful to forgive slights and negotiate truces. Weapons are ostensibly left at the door, and potential new pacts are signaled by picking and wearing magical roses that grow only during the festival. 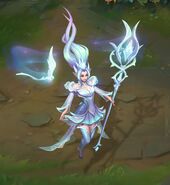